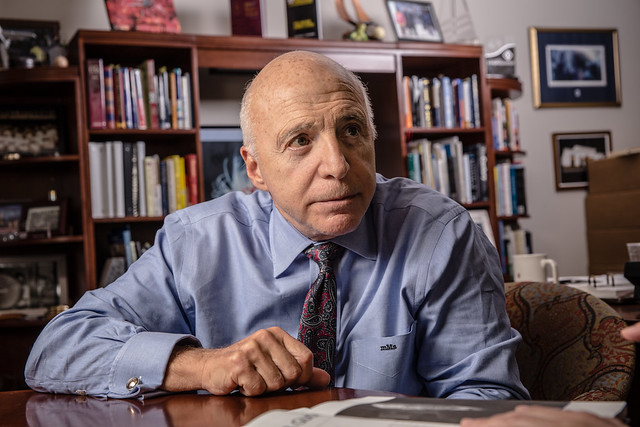 “Take the leap, and the net will appear,” said Sylvia McNair, one of 19 women featured in a book by Michael S. Maurer, “19 Stars of Indiana: Exceptional Hoosier Women,” IU Press.

This statement by McNair adequately sums up Mickey Maurer’s approach to life. Maurer has been many things, and the term “entrepreneur” doesn’t seem to do him justice.

“I am not sure he keeps a ‘to do’ list, aside from writing down his schedule each night before leaving the office,” shares Maurer’s daughter, Jill Burnett. “He is the only person I know who still actively uses a Rolodex, even though I have told him his phone could do that.”

“My first job was leading ponies for small children at an amusement center. I was in elementary school. The pony in front of me dumped on my tennis shoe. I decided to continue my education and strive for something that smelled a little better,” shares Maurer.

After graduating from North Central High School, Maurer attended the University of Colorado for his undergrad, then earned a degree from the Indiana University School of Law in Bloomington.

After practicing law for 20 years, Maurer realized he was more of an entrepreneur. “I became an attorney because my father couldn’t due to the constraints of the Great Depression. I wasn’t very good at being a lawyer,” says Maurer.

Turning to other interests, Maurer indicates he’s dabbled in cable television, film production, radio broadcasting, newspaper publishing, real estate and banking. To be clear, Maurer is Chairman of the Board of the IBJ Corporation, which publishes The Indianapolis Business Journal, Court and Commercial Record and The Indiana Lawyer. He also serves as the Chairman of the Board of The National Bank of Indianapolis, so saying he “dabbles” is drastically understating the truth. 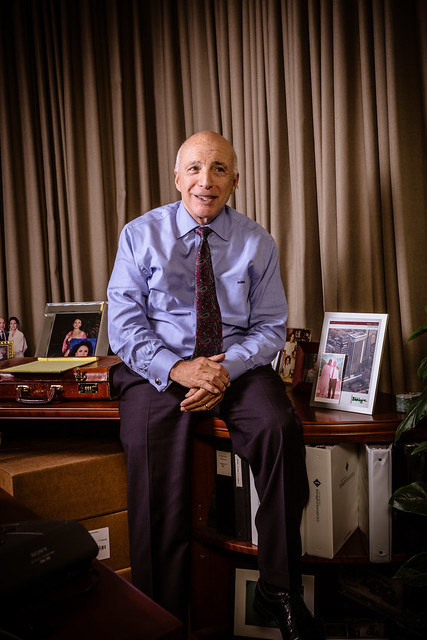 “Mickey has been a tremendous resource in the community,” says Emmis Communications Chairman and CEO Jeff Smulyan. “He has made a real impact through his tremendous civic stewardship.”

As one of original board members of Emmis Communications, Maurer’s friendship with Smulyan dates back over 30 years. Smulyan continues, “Mickey’s had a positive impact on improving the quality of life here in central Indiana.”

The impact of Maurer’s civic and philanthropic endeavors is impossible to quantify. Maurer’s contributions run wide and deep within our community, including his name gracing the Indiana University Law School in Bloomington. This incredibly generous donation on behalf of Maurer and his wife Janie illustrates their commitment to the school. The Maurer School of Law is a national leader in the study of the global legal profession.

As part of his civic duties, Maurer served as the President of the Indiana Economic Development Corp., and the following year, he was named Indiana Secretary of Commerce by Governor Mitch Daniels.

“I was paid $1 per year for that job,” shares Maurer emphasizing, “ONE dollar!”

Maurer replaced Vera Bradley co-founder Pat Miller as the Indiana Secretary of Commerce. During the transition, Maurer referred to Miller as a “classy dame,” which was spun as an offensive comment by The Indianapolis Star.

To the contrary, Maurer was offering Miller, who was not offended in the least, a sincere, heartfelt compliment. This incident inspired Maurer to pen the book, “19 Stars of Indiana: Exceptional Hoosier Women,” highlighting true role models for our society, both locally and globally.

“I marvel at Mickey’s perseverance and passion by which he pursues the things that are important to him,” praises Christel House Founder and CEO Christel DeHaan. “He is making a difference. What a great testimony to living a purposeful life.”

The success of the book influenced Maurer to create one honoring Hoosier men. In the book, he features, among others, Senator Richard Lugar, Eugene B. Glick and Gebisa Ejeta, a Purdue University geneticist and World Food Prize Foundation 2009 Prize Laureate, whom Maurer sincerely credits with the sole responsibility of saving more lives than anyone else on the planet.

“My dad has always believed in following and pursuing your interests and passions,” shares Burnett. “He’s always encouraged my brothers and me to do so, as he certainly has followed his.”

“One snowy weekend, I thought I would arrange my underwater photographs into a book,” recalls Maurer. “One year later, the book went to print.”

In his most recent book, “10 Essential Principles of Entrepreneurship,” Maurer features life lessons you never learned in school. He dedicates the book to his father, Julius Maurer, and his Uncle Mickey.

“My dad and uncle owned Maurer Brothers Auto Parts at Ninth and Senate Avenue,” shares Maurer. “Out on the fence was a sign that read, ‘If you can’t stop in, smile as you go by.’” The lessons shared in the book are illustrated with examples of Maurer’s friends, including Martha Hoover, who exemplifies redefining “barriers to entry.” Hoover is not mentioned once but four times throughout the book. 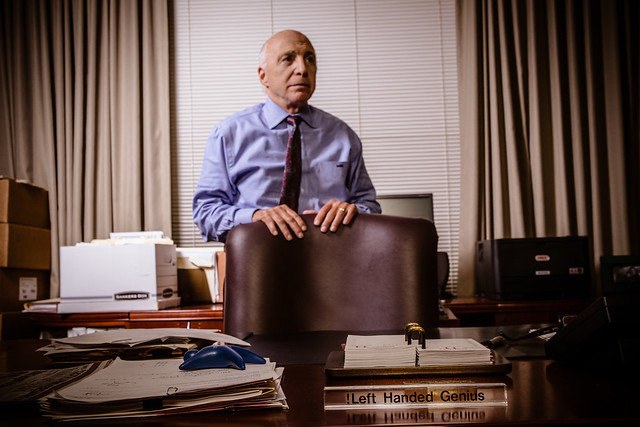 “I am fortunate to be able to call Mickey Maurer a mentor, as well as a friend,” shares Hoover. “So often people refer to him as a ‘serial entrepreneur,’ but really he is a ‘serial mentor.’ Always generous to me personally, to countless others and to the community at large, Mickey gives of his time, talent and treasure.

“I never walk away from even a chance meeting without learning something. Mickey’s worldview is progressive and big picture, yet his impact is local. Unlike others in his position, he freely and graciously continues to share his knowledge.”

Hoover’s Patachou, Inc. proudly provides sponsorship for Mickey’s Camp, a unique camping experience Maurer created 15 years ago. What if you could combine two and a half days of fun events, relaxation and networking in a different environment than you are used to? Mickey’s Camp splits the week between the women and the men, enabling a fun networking experience for their campers, and it’s partially tax-deductible.

“It was always a dream of mine to have a camp where you can learn new skills from the best, so billiards is taught by world ranking professionals Jeanette Lee and her husband George Breedlove,” says Maurer, mentioning only a couple of the 40+ activities on the list of options. “A camper can learn how to play Texas Hold’em from World Series of Poker champion Linda Johnson.”

Since its inception 15 years ago, Mickey’s Camp has raised and donated over $2 million to local charities. Descending on Bradford Woods are 125 women and 125 men to immerse themselves in activities taught by the best in their fields. 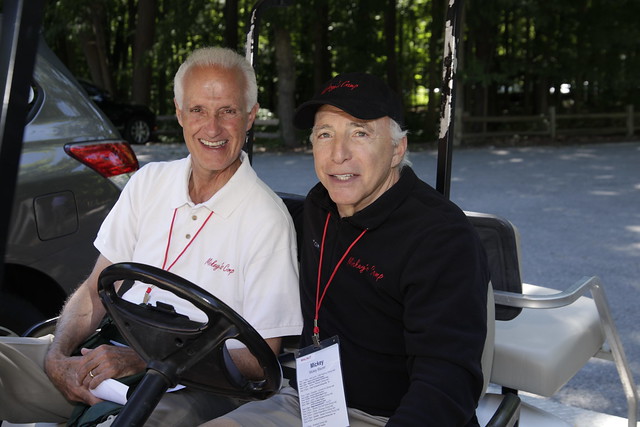 Burnett joined event manager extraordinaire Kari Strolberg in coordinating all camp activities, meals and logistics. Not only does Burnett get to work with Mickey’s Camp, but this enables her to work closely with her dad, gleaning knowledge from him.

“You can’t get a better teacher than my dad,” says Burnett. “He is patient and encouraging, and while he may steer me a bit, he is always there for me. I love being with my dad and watching him in action.”

“This is the ninth year for women and the 15th year for men,” shares Strolberg. “We have many repeat campers, but new campers are always welcome.”

And thanks to donors like Patachou, Inc., campers experience incredible meals. “We have amazing partnerships providing our meals such as Patachou, Scholars Inn, Palomino, Kahn’s Catering, Traders Point Creamery, Amore, Sullivan’s and Shapiro’s, to name a few!” says Burnett. “We are so grateful for all of our sponsors!”

“Mickey’s Camp is a rewarding experience with so many stories,” shares Strolberg. “It is a great opportunity to try new things, and it can be whatever you want it to be. There are people who do wine tasting, gourmet cooking and anything that isn’t fitness related. There is something for everyone, no matter what kind of person you are, athletic or not, and each camper can choose eight options from over 40 activities, which encourages campers to come back and try more things.”

“Similar to Dr. Seuss’ ‘Green Eggs and Ham’ lesson, how do you know you don’t like them unless you try?” adds Burnett. “After all, trying something new might spark an unknown passion or skill.”

Maurer and his wife, Janie, have three children and nine grandchildren.