The Dancing Donut Jives On Monon’s East Side 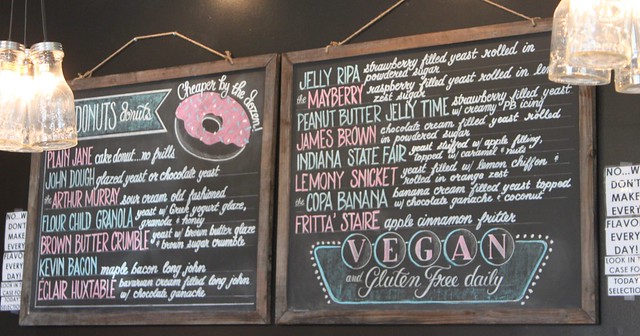 It was late one evening when Kate Drury found herself recalling an old family tradition. Before and after church, her father would retrieve an old flat-kettle from the kitchen cupboard and fry up a batch of donuts.

And in this vivid memory was rooted the reason for her new shop, The Dancing Donut. The flavors were picked, the ingredients prepared and the recipes tested. But one task remained before opening her business — naming the donuts. “The Kevin Bacon kind of named itself,” says Owner and Creator Kate of the maple bacon Long John donut.

The Dancing Donut is the newest venture for Kate who is also the owner of Indy’s original cupcake boutique, The Flying Cupcake. Just steps from the Monon Trail on East 54th Street, The Dancing Donut welcomes customers at 7 a.m. Tuesday through Saturday and at 9 a.m. on Sundays.

Kate had always wanted to open a donut shop. “I wanted to specialize in one thing and do one thing really well,” she says. After her cupcake business expanded to five stores and two food trucks, Kate was soon ready to return to the kitchens and try a new concept. “When you expand, it’s great, but sometimes you’re running the whole business rather than in the kitchen,” she says.

Not until last fall did Kate’s dream become a reality when a vacancy opened up at the Monon Shops. She loved the feel of the SoBro neighborhood and knew customers would appreciate the gourmet donut experience. “I’m so fortunate to have so much support from the neighborhood,” says Kate, who lives in the Meridian Kessler area.

Kate has collected antique furniture for years, just knowing she would open the place. Kate gathered her colorful couches and chairs to serve as furniture and hired a local artist to paint the Mona Lisa, smiling with a donut in hand. With the addition of Trixie, the blushing donut on the shop’s label, The Dancing Donut was one step closer to opening.

The work begins each night at 10 p.m. Employees roll and cut the dough, allowing for several stages of rising. A third rising process before frying and finishing creates a donut with a crispy outside and a light and fluffy inside. “It’s all made from scratch, and it’s every day,” says Kate. Nothing, including the icings or fillings, is made in advance. 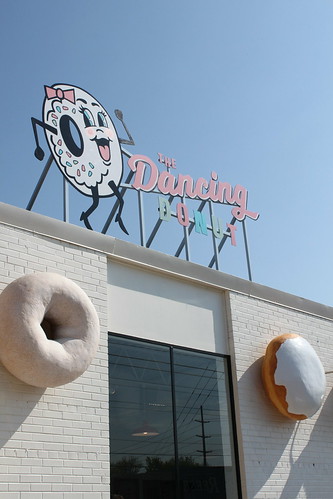 The Dancing Donut’s website, thedancingdonut.com, now features a rotating menu, and customers can scout out special flavors like “I’ve Got the Bluesberry Cheesecake.”

Planning new flavors begins in the kitchen with Kate and her staff. “Everyone comes together to see what works,” says Kate, who values her staff’s love and commitment to the process. They have even adapted cupcake recipes to fit her donuts, dubbing one flavor “The Mariah Berry.”

The menu offers more than the traditional glazed and frosted donuts. It also features baked, gluten free and vegan options. Soon, Kate is adding cappuccino and espresso drinks to her menu.

On some days, the shop makes 1,500 donuts, including plenty of bestsellers like the Brown Butter Crumble or the Éclair Huxtable, only to sell out before the 3 p.m. closing.

The Dancing Donut is not just another trendy shop. People have traveled from beyond the Indy metro area just for the experience. From off the Monon, runners, walkers and bikers gather for a cup of Intelligentsia coffee and a James Brown or Lemony Snicket. Moms push strollers and grab kid-friendly items like a Peanut Butter Jelly Time, Slim Shady or The E.T. donut.

“They’re not revolutionary flavors,” Kate says, but she notes that her made-from-scratch chocolate ganache is still underneath the M&Ms and Reese’s Pieces.

The naming of the donuts is typically a challenge for Kate and her husband, who often works behind the scenes. Java the Hut, filled with a coffee cream, was his idea. She also gives him all the credit for the late-night naming of the shop’s bestseller, a plain yeast glazed donut called…the John Dough.

Honey Bees, Our Most Efficient Pollinators