The Fight for Life 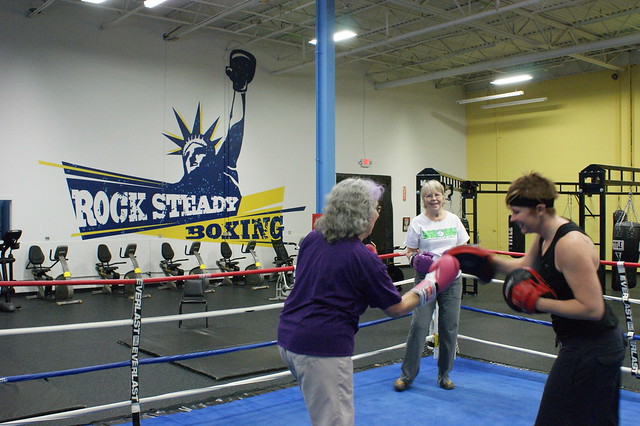 “I like punching things,” said Rock Steady Boxing member and retired teacher Judy Rempala. This is evident by the way Rempala threw her punches into the focus mitts worn by coach Kristy Rose Follmar, a former professional boxer turned head coach and program director at Rock Steady Boxing. Also in the ring is Mary Thiel, former bacteriologist, who took some mean jabs at the focus mitts with Follmar as well.

Mark Caldwell, a retired RN, is punching a double-end bag, which is tethered to the floor and from above. Bill Kuhn, a retired Indiana state policeman and sharpshooter, takes rhythmic punches to the speed bag. Steve Gilbert is doing his cardio rotation on a recumbent bike.

While all of these participants from varied backgrounds are swinging at focus mitts, jumping rope, punching bags, doing core work, cardio and stretching, what they are actually training for is the fight of their lives. All of these boxers have Parkinson’s disease.

“This is an inspirational place to work,” Rock Steady Executive Director Joyce Johnson said. “All of our members share the common bond of Parkinson’s, and we see various levels of the presentation of the disease, but all improve when they walk through our door.”

Founded in 2006 by former Marion County Prosecutor Scott Newman after an early onset diagnosis of Parkinson’s, Rock Steady Boxing now has 33 total affiliates in 11 states and three locations internationally. Indianapolis boasts five of these locations around the city.

As Follmar neared the end of her professional boxing career, she was looking for a way of helping others when Scott Newman asked her to join Rock Steady Boxing.

“A career fell in my lap when Scott approached me about being the boxing coach for Parkinson’s patients,” said Follmar. “Thanks to his positive results with boxing, others may now experience those same benefits.”

Not only is Coach Follmar an ideal Rock Steady trainer based on her fitness education and boxing career, but she can relate with the members’ struggle with their depressive tendencies. Follmar started boxing to help release her anger and depression after the death of her father. When Follmar started boxing, she thought anger is what drove her. She realized over time that it is love that motivates her. Her mantra is “love always wins,” which is tattooed on her forearm. 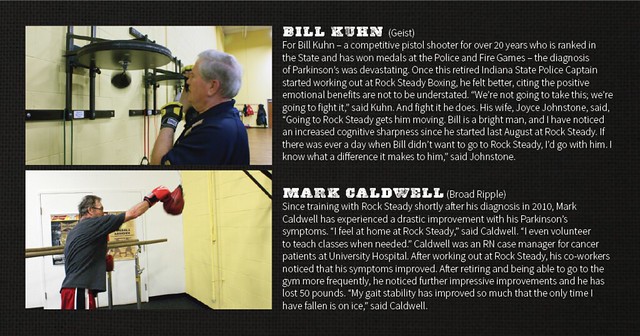 The program at Rock Steady Boxing is a non-contact, intense boxing-inspired fitness program. The members train just like professional boxers.

“The only difference between us and the professional boxers is that they get to take a day off,” said Steve Gilbert, who shares the Rock Steady story every chance he gets. Gilbert’s 102-year-old father who also has Parkinson’s said, “It’s the only time in my life I have ever taken a swing at a lady.”

“Balance, gait work, vocal training, we do all of it,” said Follmar. “Parkinson’s patients have a list of symptoms, such as tremors, depression, imbalances while walking and their voices get softer. So we combat these and many other expressions of Parkinson’s with our training techniques.”

“Everything we do is done with intention. For instance, to help with voices, we do a lot of yelling to help the vocal cords,” added Follmar.

“Boxing is a groundbreaking means of helping others with Parkinson’s. It is a way to fight back,” said Follmar. “Every member is inspiring, everyone is unique. Who wouldn’t want to tell their grandkids that they are going to boxing? The members take pride in being hard-core.”

Co-coach Christine Timberlake’s athletic husband, Tom, was diagnosed at the age of 36 with Parkinson’s. “When you are told you have 10 years before you are in a wheelchair, it is devastating. We went home and basically had a bunker mentality,” shared Timberlake. Tom’s posture and attitude declined as he slid into mid-to-late stage Parkinson’s rapidly over the next six years until he attended a conference with Scott Newman.

This encounter with Newman encouraged Tom to take up boxing as one of the original members of Rock Steady Boxing.

“In six to eight weeks, I saw my husband stand up straighter, he was smiling again, and he wanted to go out and do things,” said Christine. Inspired by her husband’s progress and those of other members, Christine started volunteering with Rock Steady, now working there full-time.

There are four levels of classes held at Rock Steady. Level one is the least restrictive with the minimal amount of modifications, and level four has participants who are experiencing the most severe expression of Parkinson’s.

“With our level four classes, it is amazing what these participants can do, even from a wheelchair,” shared Johnson, whose mom had Parkinson’s. “Our participants are experiencing real results in staving off their symptoms and improving by fighting it. Literally.”

Follmar and Timberlake are in a unique situation. “We do the initial assessments of new members, then we watch the magic happen as they get into our training,” shared Timberlake.

Follmar added, “We see people on their first visit here. It is a powerful moment because it is the first time they decide that they are going to fight back. We are uniquely positioned as coaches to tell them that they are accepted here, that we have a place for them. The most exciting part is that we know the potential of where they will be.”

Researcher and Associate Professor at University of Indianapolis Stephanie Combs-Miller, PhD, just completed a two-year longitudinal study including 88 people with Parkinson’s that shows that the boxers in the Rock Steady program maintain a higher level of function than those who do other types of exercise.

The promising results from that study showed significant differences in all measured categories including spinal rotation, gait balance and quality of life.

“The results from the group of boxers were higher, in many cases significantly higher, than those who were exercising but not boxing,” said Combs-Miller.

Dr. S. Elizabeth Zauber, a neurologist specializing in movement disorders, knows programs like Rock Steady can help patients. “Every patient I see, I recommend exercise to them. Those that are active have better control over their symptoms.”

“In the last 10 years, the Michael J. Fox Foundation has invested $300 million looking for a cure and it is still elusive,” said Johnson. “Rock Steady is about maintaining the highest level of quality of life while we wait for that cure.”

But even without a cure, Rock Steady boxers are going to keep fighting. “We don’t know what the future holds,” said Gilbert. “We’re not waiting.” 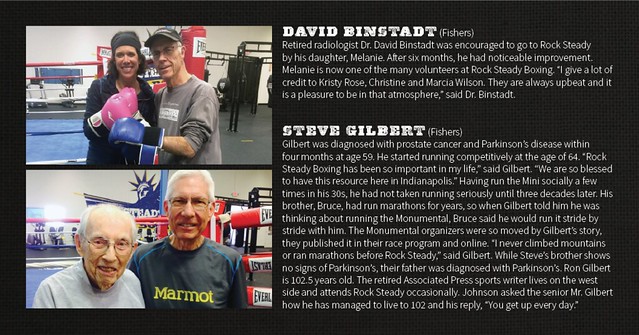 Geist Mom of the Year Finalists