Four days. 40+ bands. Four stages. Back for another year, the White River Arts, Recreation and Music Festival, or WARMfest, promises to be even better than last year’s inaugural run.

Attendees flock to Broad Ripple Park by bus, car, on foot, or bicycle, and a few local residents arrive via the river. Raising the collective consciousness on environmental awareness with regard to the White River is a major objective of WARMfest, which could have been named RIVERfest… 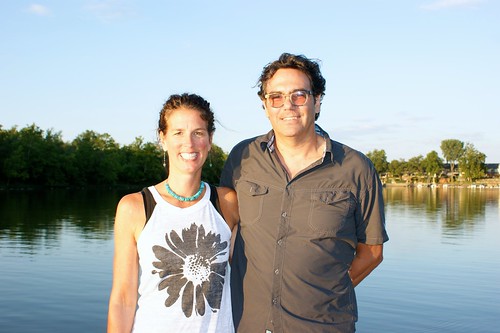 WARMfest is the realized dream of Dan Ripley, who has created a vehicle for awareness of the river. Where many take the White River for granted—if they even notice it at all—Ripley sees potential. Looking at other waterways in major cities around the world, Ripley would love to see innovation, investment, and ingenuity combine to create amazing possibilities for the multi-use potential of the White River.

“This river has quite a history, yet it has been relatively ignored and mistreated in the latter half of the past century. It is time to embrace a vision for its usage and utilization in Indianapolis,” states Ripley. The river inspired him to begin WARMfest as a celebration leading to a greater plan for Broad Ripple Village to reconnect to the waterway.

Not only is this “ripple of change” focused on the river, WARMfest is bringing amazing bands together for a festival that lifts a city on to a progressive wave toward this positive change. As a result, the community lifts as a whole, which is appropriately timed. Broad Ripple residents have always had a collective, significant voice. WARMfest perhaps adds a younger, more progressive voice.

This year’s festival draws back several of the bands from last year. The response and reviews from last year’s inaugural event were positive and encouraging. “Band members said they wanted to be involved next year and in years to come as this grows and develops a strong foothold,” states Ripley. This year there will be three stages set up in the park, with a 4th stage on the Wapahani boat cruise.

Finding others who share the same vision was the easy part. Jack Shepler, who blended the Broad Ripple Music Festival into WARMfest, is one of many generous and idealistic souls who have come together to create this successful weekend. It became a foregone conclusion to merge their efforts. Jeb Banner, whose friendship and mentoring to Ripley and the festival has been another key element for its success. Indy Parks, White River Yacht Club and Josh Baker of MOKB Presents, all have provided amazing foundational support for WARMfest.

It takes an army to pull off such a large-scale event. The people and organizations that have helped with WARMfest are too many to name, and Ripley is grateful to all. “Our foundation of support is a true grassroots effort,” states Ripley. “We have had support from the top down, but the tremendous help from the local level has been our key to success.”

The inception of support started with family. Gratitude extends beyond words to Dan’s mom, Judy Ripley, and to his wife, Lisa, who was instrumental with drawing in the health and fitness community.

Proceeds from WARMfest are donated to the Carl G. Fisher Society, a not-for-profit focused on restoration of the White River waterfront in Broad Ripple. Music brings people together, and an event like WARMfest is celebrating Broad Ripple and its origins. Getting back to basics may be just what the community needs. After all, Broad Ripple gleaned its name from the river. Isn’t it time to reconnect?

WARMup, August 10, 1 p.m. – 6 p.m., featuring demos of Qigong/Tai Chi, CrossFit, paddleboarding, and Zumba. Bands that will grace the stage: Ruditoonz, Chad Mills, and Hyryder. The IndyCity Futbol league all-star game will be held as well as the 40th reunion party for t9he WNAP raft race. Indy’s Holistic Hub will be on hand and there will be plenty of food trucks, as well. This event is free to the public, with tickets available for purchase for WARMfest, avoiding online purchasing fees.

The four-day event will kick off with local programming for Friday, with a strong Broad Ripple vibe. Saturday follows with an indie rock theme, while Sunday will hear blues and heritage rock resonate through the park. Monday finishes strong with “jam band” day and reggae as the mojo. Families may enjoy all of the festivities, with an emphasis on Monday as a Community Day featuring the Indie Arts & Vintage Marketplace.

Check out warmfest.org for additional information, updates, TICKETS and line-ups.

A Canal Runs Through It