In total, 560 students walked across the stage and received diplomas that day. Of that total, 233 graduates (almost half) received a Core 40 diploma with Academic Honors — an honor only earned by students who met certain requirements beyond just the Core 40 required by the state. Some of those requirements include extra math, world language and fine arts classes as well as achieving an overall grade point average (GPA) of 3.0 or better.

“This is an outstanding senior class,” said Doug Bird, principal of Center Grove High School. “We are very pleased that many of our students plan to continue their educations at colleges, universities and technical schools next year.”

Beyond that, 58 students received recognition for their involvement in the National Honor Society (NHS). Students apply to become a part of the NHS their senior year, and then certain members of the faculty consider each student’s character, scholarship, leadership and service before deciding which students would ultimately join. In total, the senior class of 2015 earned a combined $4.5 million in scholarships toward college. 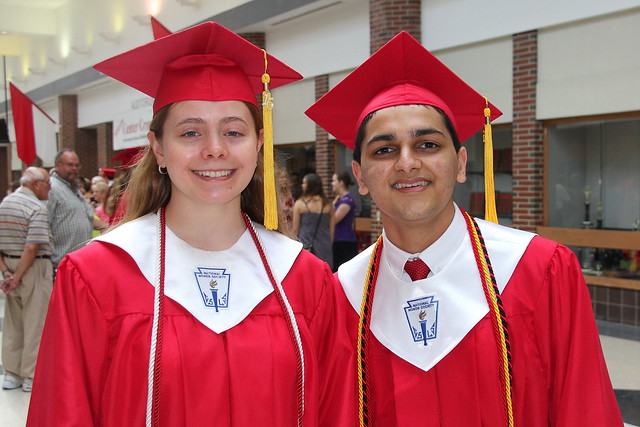 “Walking across that stage felt amazing,” says Simon. “All the hard work finally paid off.” However, even after graduation, Pandya and Simon’s streaks of excellence can’t stop there. With all the knowledge of the past four years under their belts, they are charging head on into the next phase of their lives: college.

Pandya received a Wells scholarship from Indiana University and is setting his sights on medical school. It’s not just his obvious intelligence — as evidenced by a GPA of 4.839 — that makes his career aspiration unsurprising. Working in a field that aims first at helping to care for other people is completely in line with Pandya’s character.

He helped organize and lead a branch of Timmy Global Health at the high school. Timmy Global Health is a humanitarian organization originally started by an Indiana resident in 1997 and is dedicated to bringing quality healthcare and medical support to those in need in five developing countries. Pandya also volunteered with his Spanish IV class in helping to clean up some of the landscaping of a school in Indianapolis.

Simon, the salutatorian of the 2015 class, is no stranger to working hard and giving her all. Simon not only earned a perfect score on the reading portion of her SAT, but she was also a National Merit Scholar semifinalist.

Outside the classroom, she was active in sports as she threw shot put and discus for the CG track team for all four years. Not to mention she was also a dedicated member Center Grove marching band — even marching with her fellow band members in the Macy’s Day Parade in the fall of last year. Simon accomplished all of this on top of her advanced placement courses while still earning a final GPA of 4.726.

Indiana University Gains Two Top Students
Both Pandya and Simon plan to continue their education at Indiana University — Pandya as a cognitive science and pre-med major and Simon as a chemistry major. Neither are strangers to the IU campus as both of them have older brothers attending the university as well.

Pandya’s older brother, Janit, was the valedictorian of Center Grove High School’s class of 2012. Pandya plans to go into medicine and use his intellect and heart to help others, and Simon plans to become a researcher and possibly even own her own lab one day.

Both students make their communities proud, and they will no doubt change the world for the better.