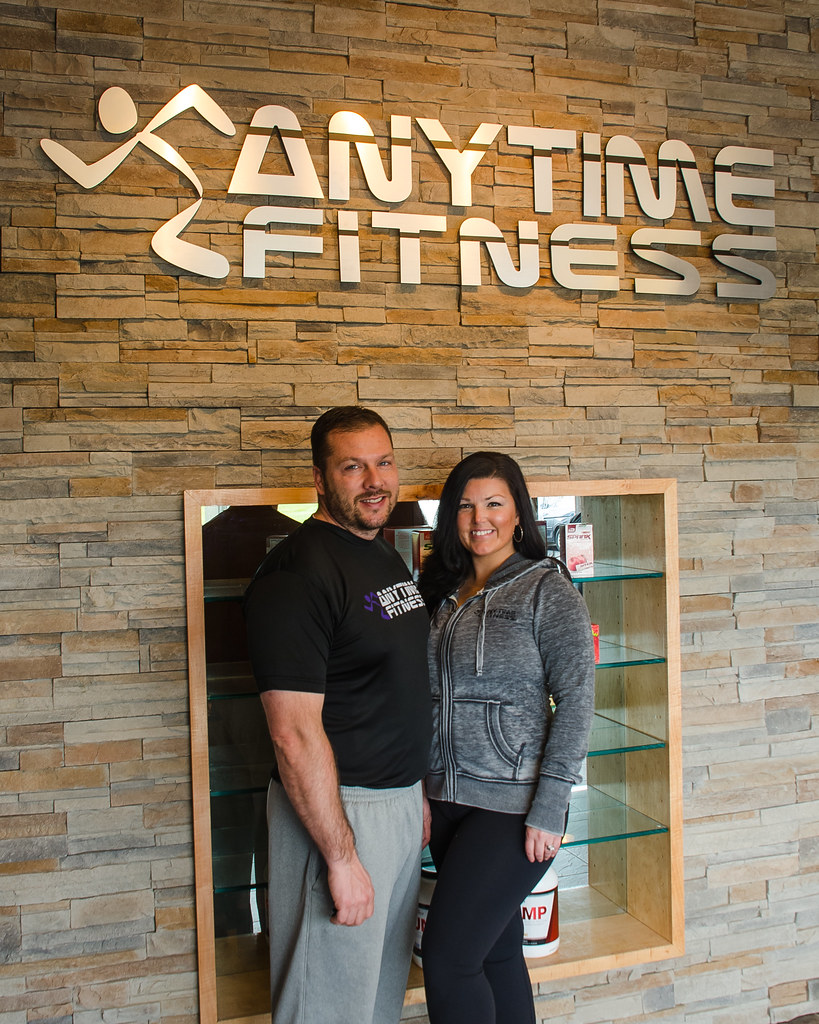 Most married couples begin their relationship as friends, but for Center Grove residents and Anytime Fitness co-owners Craig and Steffanie Brown, circumstances led to them being friends by default.

It starts with Craig Brown and Chris Hartsock. They were best friends from their early elementary school years until the day they graduated from Decatur Central High School. Though Craig joined the Army and moved several states away, the two men picked up right where they’d left off when Craig moved back to Indiana seven years later, in April 1999. By that time, Craig was married with an infant son, Koby, and Chris had met Steffanie, originally from Ohio. On a whim a month earlier, Steffanie had flown out from Cleveland to meet Chris. She never left. Steffanie and Chris joined Craig and his wife, Kathy, for dinner. The two couples were soon spending weekends together with a large circle of close-knit friends. Chris and Steffanie were married two years later.

For the next four years the two couples celebrated birthdays and holidays as family. Then Craig’s wife suddenly died in 2005, leaving him stunned and alone with Koby. Chris and Steffanie helped Craig cope with single parenthood and made sure he was involved and surrounded by their extended group of friends as much as possible. In 2007, another tragedy: Chris, a 14-year Indianapolis Power and Light employee, was replacing a 1,200-pound electrical transformer when the crane lifting it fell. Craig was rushed to Methodist Hospital, where Steffanie and their friends and Chris’ family were told that if Chris survived, he would suffer severe brain damage and be quadriplegic. Steffanie spent hours talking to family members and Craig, whose wife had also died of a brain injury. “I had gone through the same thing,” he recalls. Steffanie knew Chris wouldn’t want to live with such drastic injuries, if he recovered at all. Two days later, they took Chris off life support.

“I don’t know that the funeral would have been planned, if it hadn’t been for Craig and our friends,” Steffanie now says. “I wasn’t in the state of mind to be able to make decisions.” She couldn’t sleep, and she stayed with friends, not wanting to ever go back to the house she and Chris had shared. Their home had already been on the market and sold about a month after the accident. “We had no children; I had no immediate family here. Our friends had to plan my life for a while,” she said.

Craig, who had been through the same turmoil of tragically losing a spouse just two years before, tried to help Steffanie as much as possible. He had lost his best friend and Steffanie had lost her husband. However, after a few months of helping one another cope, Steffanie and Craig started to feel they might be more than friends who had both lost someone they loved. “I was in a really bad place,” Steffanie said. “But when I was with Craig, I felt better. He made me feel alive and think things would get better.”

For Craig’s part, admitting that he might like Steffanie as more than a friend wasn’t easy. “It really bothered me,” he says. “I was thinking, ‘You aren’t supposed to be thinking like this … your best friend’s widow … no, I can’t feel like this, it’s not right.’” Still, Craig invited Steffanie to a concert on Memorial Day, and that night he confessed how he felt. “I was acting weird,” he says, “I think I said, ‘I know you probably don’t want to hear this, but I have feelings for you and I know that Chris has only been gone a few months, but I will wait for you until you’re ready, if you have feelings for me.’” It was a risky move — but Steffanie felt the same.

“My parents, her mom, they thought it was great,” Craig says. Their friends felt differently.

“We tried to meet one-on-one [with our friends] to explain,” Steffanie says. “How could we lose both our spouses and know the one thing giving us hope — our relationship — we were being asked to give up to save our friendships?” Together, they decided they were prepared to lose their friends and pursue a relationship. “But to this day, we’re saddened that we had to make a new life together that didn’t include our friends,” she says. 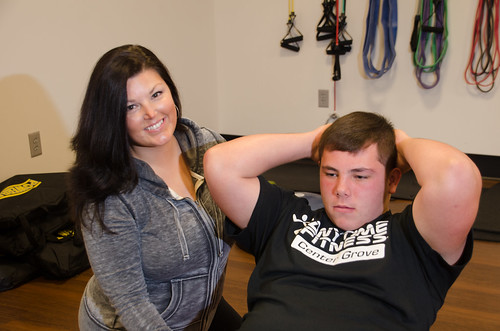 Even though Steffanie and Craig were rebuilding their lives together and happy in their relationship, the turmoil of the year after Chris’ death took a toll on their health and their diets in particular. “We ate our way through the pain,” Steffanie says. “We were at the heaviest weights in our lives. I couldn’t believe I weighed as much as I did.” Steffanie, who had been fit, topped out at around 200 pounds; Craig reached 250.

In late 2009, the two decided it was time to turn things around. Steffanie started going to the gym twice a day and hired a personal trainer. She was introduced to circuit training and became hooked. “Fitness was therapy, and it gave me control,” she says. “I couldn’t control the death of my husband; I couldn’t control that my friends had disowned me. But in the gym, I was in charge and I could see that my actions were producing a positive result.” Steffanie became a personal trainer at the end of the year, and then made a goal to lose enough weight to participate in figure and bikini competitions. “I got down to 110 pounds and competed in three figure and five bikini shows.” Steffanie stresses that she lost weight the responsible way, over a good period of time: “It took about one-and-a-half years, but I did it right.” Craig also lost about 50 pounds.

On their two-year anniversary, Craig proposed to Steffanie during a vacation to Cabo San Lucas. They married in 2011, but the day after their honeymoon, Craig had a massive seizure due to an undiagnosed AVM mass in his brain. Steffanie’s immediate reaction was disbelief. “I thought, ‘God, are you really serious?!’” she says. “It shook me.” Fortunately, Craig recovered (he had to have radiation treatments and undergoes periodical check-ups) and Steffanie felt a sense of peace that everything was going to be OK. She also decided they needed to be more active in a church. They joined New Hope on Fairview Road with a determination not to be “seat fillers” and to make a new family of friends.

From the beginning of their relationship, Craig and Steffanie agreed they’d like to own their own business someday, and with their newfound commitment to fitness, it seemed they’d found their niche. Steffanie left her job at a large corporate-run gym, and in 2012, she and Craig decided to open their own gym in Center Grove. Choosing to join the Anytime Fitness franchise was easy. “We wanted to be more customer-service-driven than the big-box gyms,” Steffanie says. “I was working with a friend who owned two Anytime Fitness locations, so I saw how it worked. I want people who come to my gym to know me. When you’re at a big-box place, no one knows your goals. There’s no acknowledgement of what you’re doing.” 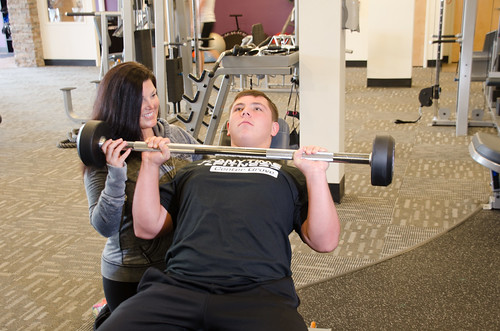 Not that there weren’t a few setbacks. It took almost two years to secure a lease, but they finally landed in a 5,000-square-foot space near the corner of Olive Branch Road and State Road 135. More than 400 members have joined since opening at the end of May. Craig has another full-time job at a communications company, but Steffanie is at the gym full-time as a personal trainer, and to ensure that Anytime Fitness feels just that — personal. “We picked out every piece of equipment in here,” she says.

The Center Grove gym also offers an unusual Anytime Fitness benefit: classes. Most locations don’t offer them, and membership isn’t required to join in, say, a Monday night Zumba class. In addition, whether members sign her on as a personal trainer or not, Steffanie is on hand to offer tips and encouragement. “It’s as hands-on as you want it to be,” she says. “Members know me not because I’m the owner, but because I go out there and I care. I know what it’s like to struggle and be overweight and unhappy. There’s virtually no situation where you don’t benefit from exercise,” she says — adding that includes her own, despite the heartache she and Craig went through. “I’d set up a really good life here, and then the rug was ripped out,” Steffanie says. “In turn, God gave me Craig.”