It was a typically hot, humid summer day when an ominous emergency call crackled across the Fishers Fire Department radio. “We are on the scene of a two-story residence with heavy smoke showing.“ Kyle Thomas’ ears perked up, and for good reason. “I’ve heard thousands of fire calls go out and addresses come across the scanner,” the WTHR assignment manager remembers. “And this particular address caught my attention—because it was my own. That’s something you don’t want to hear, and something I’ll never forget.” The TV news guru was about to step into his own newscast.

This is a story about television. Specifically, an examination of how TV newscasts get made. It’s a peek behind the curtain at the Ball State graduate who—along with a veteran news team—decides what you see on the local news, and a recounting of the time when he became the news story.

For 15 years Thomas has enjoyed a birds-eye view of the WTHR newsroom, perched at the assignment desk on an elevated platform that is the epicenter of every news story, weather forecast and sports report you’ve watched on Channel 13, scanned on WTHR.com or scrolled on your mobile device. “He’s one of those key utility players that you trust, that you depend on,” says Kathy Hostetter, WTHR news director. “He’s going to make good decisions. He knows our purpose.”

As assignment manager Thomas oversees the 24-hours-a-day, seven-days-a-week operation of what he calls the traffic control center of Eyewitness News. “Our five-person assignment team is responsible for maintaining and keeping track of reporters, photographers, giving them stories, helping with research and assisting producers,” Kyle explains. In short, virtually nothing makes the air or the web without Thomas knowing about it. (Full disclosure: this writer is a WTHR employee.) 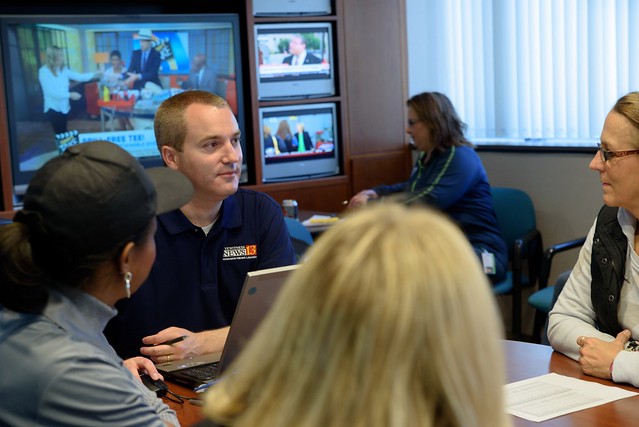 A consistent curiosity among viewers is how TV stations like WTHR decide what to cover on local newscasts. It’s a fair question considering the enormous amount of information that is collated daily from hundreds of sources. “It’s a team effort—not just me or the desk. It’s producers, managers, photographers, and web editors,” Kyle is quick to note. During morning and afternoon meetings, story ideas are weighed for their news value and community impact. “We’re trying to find stories that affect people. We’re constantly filtering things,” says Thomas.

Information pours into the newsroom: public relations releases, telephone calls, emails, tweets, website posts and public safety emergencies that unfold in real-time over the 20 or so police and fire scanners that are monitored continuously. All of it goes into a kind of vetting funnel from which the best mix of news and information trickles out. And that trickle becomes the tsunami of Channel 13 content that never stops flowing.
Hostetter says that among Kyle’s greatest assets is the ability to multitask—often manifesting as ‘Hey Kyle’ moments. Hey Kyle, can you find this? Hey Kyle, is there a mug shot? “Hey Kyle is uttered a lot in this newsroom—for the right reasons because they know that he will get the information,” says his news director. “Kyle is the one person who, when he takes a day off, it has the greatest impact on the functioning of the newsroom,” says anchor Anne Marie Tiernon matter-of-factly. “Calm under pressure, juggling many balls, many stories—many elements of everything that we do, and he stays calm, positive and professional. A true rock star.”

There are a couple of TV news myths that Thomas wants to bust. “One I get is, ‘It seems like you just focus on bad news stories.’ We love good stories about people, and try to find that balance,” the Fishers resident explains. “But bad things do happen, and to live in an informed society, that’s our job to keep you informed about what’s going on.” Then there are the supposed political and editorial newsroom agendas. Thomas firmly denies they exist. “Journalists are trained to find both sides of the story. You need to stay in the middle, tell both sides and let your viewers decide. You’re there to tell the story, not be a part of it,” Thomas declares. 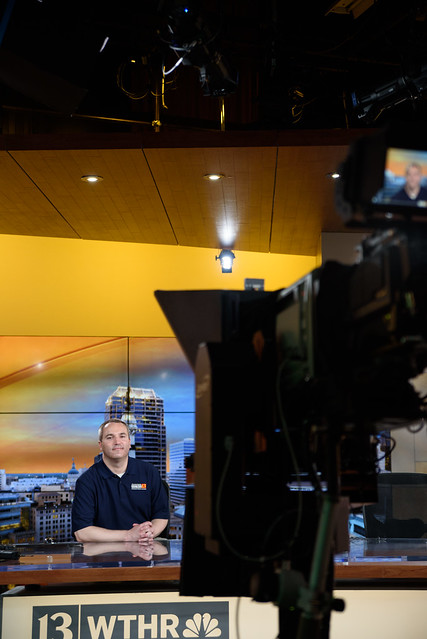 But in 2006, that’s exactly what Thomas was—the news story. Remember the scanner traffic on that stormy June afternoon? It was lightning and it had set Kyle’s house on fire. “I immediately left the station,” Thomas recounts. A self-avowed news geek, he had a scanner in his car. “I was able to listen to that play out over the scanner. It seemed like it took two hours to get home. I think it hit me the most when I got to 116th and Olio Road and I could see the smoke. At that point I knew this was a good-sized fire.”

Fortunately, Kyle’s wife and then three-year-old son were unharmed, but the fire did about $150,000 in damage. “TV crews [from Channel 6 and 13] came up there. I was interviewed. It was different being on the other side of it. But I also understood they had a job to do.”

Thomas notes how different today’s newsroom is thanks to social media and mobile technology. What hasn’t changed is the role of viewers, who Thomas says are valued, and yes, are listened to. “Some of the biggest stories we’ve covered have come from viewer emails, from tweets, from phone calls,” he notes. “I think people pretty much know what’s newsworthy and what’s not. Our viewers are smart people. When you see something happening, take a picture of it, call us and we’ll check it out.”

Who knows? It might just make it on the news—same time, same station.