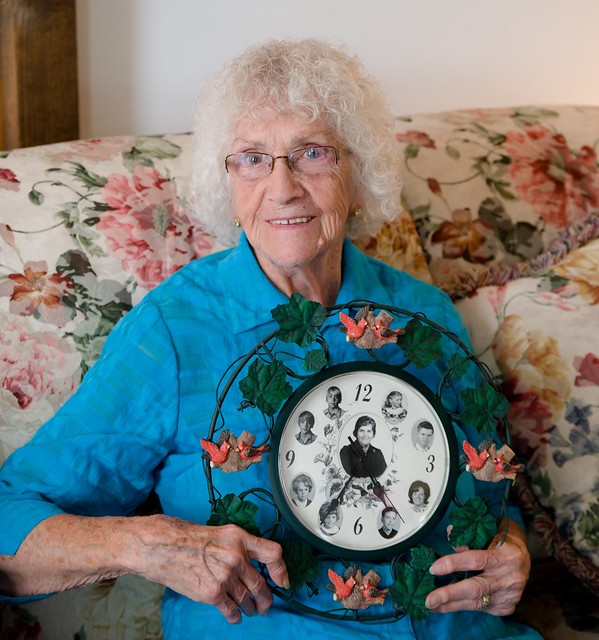 The Fishers Mom of the Year contest is a way to highlight all the wonderful moms in our community. It’s not about a competition between candidates so much as it is a great reason to focus on those who make a difference in the lives of our children. All the applicants this year were exceptional mothers, but your votes determined one worthy winner.

The 2015 Fishers Mom of the Year is Frieda Dunkerson who, by the way, had no idea she was nominated by her daughter, Nancy Courtney. Nancy and her sister, Cyndi Jones, both planned this surprise for their 91-year-old loving mother.

“When Tom Britt called my mom and told her she was one of the top three finalists, my mom was so stunned,” says Nancy. “As soon as she hung up the phone, she said, ‘You girls did what?’”

Here is the nomination that Nancy wrote about her mother, Frieda:

“Our mom is the BEST! She’s 91 years young and still full of energy! She raised eight of us, and that was a full-time job back when there were no microwaves, she used a wringer washer, hung clothes outside on a line to dry and walked in the snow to a full-time job after our father was injured in a foundry accident. Mom is the first person our family and friends call for any kind of guidance, advice and most of all prayer. She has lived in the same home since 1969 in Fortville/Fishers. No one deserves Mom of the Year more than ours!”

Frieda is a proud mother of eight blessed children. Many outside of the family call her “Mom” or “Grandma D” (short for Dunkerson) because of her ability to inspire and nurture everyone she meets. Frieda wears a comfortable smile and beams with joy, especially when she talks about her kids.

“My children are all loving, marvelous, considerate and kind,” says Frieda. One of her favorite lines has always been, “I love you, but Jesus loves you more,” as she obviously instilled this doctrine within her children’s minds as they were growing up. She continues, “He died for us. Who else would ever do that?” 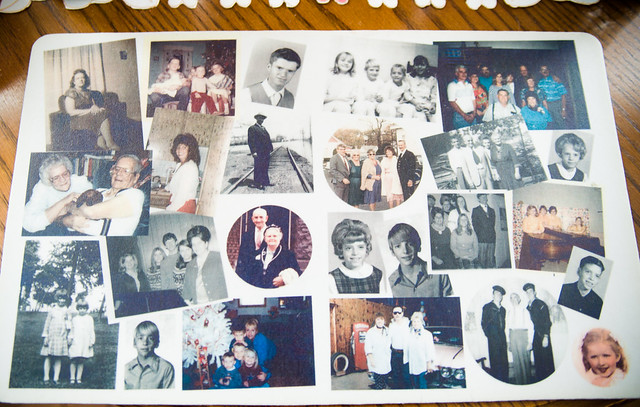 During my interview with Frieda (who was accompanied by her two daughters, Nancy and Cyndi,) I felt like I was taken back in time as they reminisced about their childhood memories.

“Mom has always said, ‘Be happy, happy, happy,’ which is one of her favorite expressions,” says Nancy. “It’s funny because years later, mom said, ‘Duck Dynasty must have stolen my line.’”

Born in Evansville, Indiana, Frieda came from a very religious family. Her father was a pastor. She grew up in Elwood since age six and had three brothers and two sisters. She recollects her childhood as being raised in a very strict home with the pilgrim holiness denomination.

“I was over-churched,” says Frieda who claims she wasn’t allowed to show very much skin as a child. She couldn’t expose her elbows or below the knees according to her parents’ rules. Sometimes she would sneak away from her mom and dad to roll up her sleeves and roll down her socks, so she could blend in with all the other kids in school. Further, she remembers searching for pennies that people had dropped on the ground, so that she could go with her friends to the 10 cent movie that was also forbidden by her parents.

As a Mother Back Then 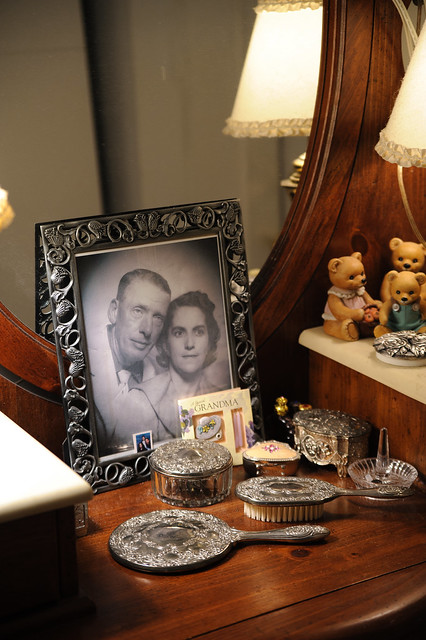 For most of her life, Frieda was a stay-at-home mom until her mid-50s when her husband, Marcus Dunkerson, was injured in a foundry. One year later, he had a stroke and was placed in a nursing home. Frieda had to find work to help support her family.

“Mom worked at the school cafeteria making peanut butter and jelly sandwiches. She made homemade peanut butter,” recalls Cyndi, the youngest of the daughters. Frieda later worked for a Hallmark store until she retired.

Frieda raised her kids at a time when there were no modern conveniences such as microwaves, crockpots, dishwashers, garbage disposals, disposable diapers and modern-day washers and dryers.

“It’s probably a lot harder to raise a child in the world we live in today,” says Cyndi as she justifies her idea of motherhood obstacles comparing the past to the present. “With the social media, technology, violence and drugs, parents have to worry more. Yet, physically being a mother back when mom was raising us, it was more challenging with cloth diapers and doing laundry without a washer and dryer.”

Ironing the family’s clothes was a big part of Frieda’s days. She remembers her methodology for creating steam for the iron and applying starch to clothes.

“I had a cork sprinkler in the top of a soda bottle to help add water for steam in ironing. I made my own starch and used a vegetable brush to apply it to the clothes.”

Reminiscing back on old times, the ladies mentioned the time that the oldest brother/son named Russell thought he was Superman at age 6 and tried to fly down the basement steps with a towel around his neck.

“I put some cold water on his head,” says Frieda. “I helped him back up the steps and gave him a hug to show him some love.” He never tried this stunt again.

Cyndi chimes in, “Mom has a fetish with shoes. She’s had close to 60 pairs at one time.” They explained how this evolved. When Frieda was a young girl, her dad would put cardboard inserts into her shoes where there were holes. She would walk eight blocks to and from school and even came home for lunch every day. Her shoes didn’t last long, especially when she would run home from school because she couldn’t wait to listen to Stella Dallas, one of the first soap operas on the radio.

Some of Frieda’s greatest memories while growing up were with her two best friends, Addie and Mary Francis. All three would ride on one bike together. One would peddle the bike, while one would sit on the trailer and the other would sit on the handle bars facing forward. Fortunately, 60 years later, these three gals were reunited in Kokomo, thanks to Frieda’s son, Russell, who found her schoolmates. In a way, he proved to his mom after all that he was in fact her Superman! Nancy brags about her mother’s health when she says, “She isn’t on any medications and has only visited the doctor twice in the last 20 years….She had a hip replacement, and less than a year later, she was dancing on top of a picnic table at our family reunion….She danced for the entire song!”

“Our mom taught us that we can choose our attitude each day to be happy or grovel in our mess,” says Cyndi who begins to tear up as she speaks. “My friends would always say how blessed I was to have a kind and loving mother who knows how to guide others….One time, a co-worker was facing a hardship in her life, and mom prayed for her and offered her advice. The co-worker couldn’t believe that someone would choose to comfort her without even knowing her. She was so moved that she wrote a thank you note to my mom.”

Frieda, Nancy and Cyndi currently live together in the same home in Fortville that they moved into back in 1969. Frieda has lived there ever since. This residence is now considered Fishers after the annexation. These three family members have an especially close bond that exudes a most heartwarming presence.

Frieda shares her strategy for living life when she says, “Love conquers everything. I realize this more and more each day; that’s why I stay happy all the time. I live one day at a time. When the scroll stops on my name, I’m outta here. But I’m alive today. Today has never been here, and it won’t be here again. So be happy, happy, happy!”

As a Fishers Mom of the Year winner, Frieda is entitled to three gifts geared toward the spa and one with flowers. She would like to donate the spa gifts to the other two finalists. She says, “I believe as younger mothers, they deserve this more than me. But I really would love those flowers!”

Nancy adds, “Mom always has said, ‘Give me flowers every day when I’m alive; don’t wait until I die. I want to enjoy them now.’”