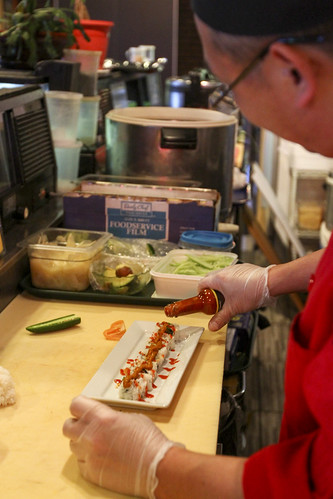 With spicy tuna, habanero peppers, Sriracha and ghost pepper sauce, Red Sake’s Godzilla roll is the hottest food challenge in Geist. To earn your spot on the Red Sake Wall of Fame as well as your own Godzilla T-shirt, you will have to finish an entire sushi roll coated with some of the world’s spiciest peppers. The roll must be eaten in five minutes or less without any food or drink. After you consume the last piece, you have to wait another five minutes before you can take a drink!

We had our own challenge night at Red Sake last month with three participants: mom-of-four Sheri Nichols, Albion College student Camila Manrique and Red Sake’s own chef Charles Bragg. Each challenger was faced with an entire roll and a five minute deadline. While Camila and Charles persevered and were able to beat the challenge, Sheri fell short and gave up after completing almost half of the roll.

“Why did I do it? Good question. Mostly because I love a good competition. Why did I quit? I am hanging my head in shame thinking about that moment, but my organs were pretty much calling me an idiot,” said Sheri. “I must have momentarily forgotten I was Irish. I think I am going to stick with mashed potatoes with a little bit of pepper to spice things up a bit. I am hoping the lining in my stomach somehow grows back … if that is even a thing. It was a competition between me and a silly pepper, and I’m now waving the white flag. Just don’t dare me to eat a worm anytime soon because I will probably say ‘bring it on.’”

Winning the competition, Camila completed the entire roll in less than two minutes. Although she said that she normally does not eat spicy food, Camila took home a T-shirt and bragging rights as the Godzilla Challenge Champion.

“The hardest part was the afterburn section, but at that point, I thought that since I had already eaten the roll, I might as well finish the challenge,” said Camila. “My throat definitely hurt for a while, but it was cool knowing I finished the challenge.” 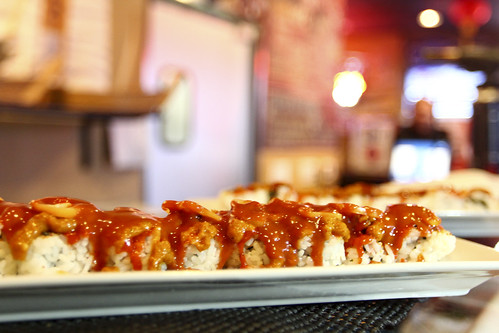 Also finishing, chef Charles Bragg made his way onto Red Sake’s Wall of Fame. Although he has worked at the restaurant for a while, he had never tried the infamous roll.

“I decided to do the challenge to prove my self-worth. I have been working here for almost a year and a half, so I thought it was time,” said Charles. “When I took the initial bite, I thought that it wasn’t bad. At the second bite, I thought it was a bad idea. But I overcame, and I am a champion now. I do not have a losing spirit, so that kept me going.”

If you want to take on the challenge for yourself, stop by Red Sake in Geist, located just off Fall Creek and Brooks School Road near Mama Bear’s.