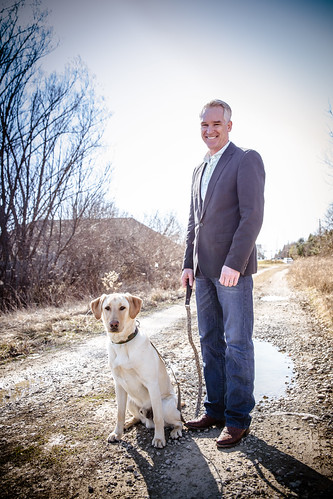 Lawrence City Council President Tom Shevlot and his dog Reagan stand near 79th and Sunnyside Road where a proposed nature trail is likely to be built.

With all the focus lately on the 82nd Street widening project, few would guess that just a few miles away another change to the Geist landscape will be taking place.

A new nature trail is being planned between Sunnyside and Oaklandon at 79th Street. The project will be self-contained, not create additional traffic snarls and will complement the expansion of 82nd Street and 79th Street. For Geist commuters that is going to be a bit of good news given the massive construction project taking place on the expansion of 82nd Street to the west.

Over 10 years ago, the City of Lawrence was awarded $3.9 million to expand 79th Street through to Oaklandon, but the money lay dormant no longer, being earmarked for that project. Council President for the City of Lawrence Tom Shevlot, discovered the funds and decided to appeal to Indiana Department of Transportation (INDOT) for approval to use the funds for a trail project as well as an expansion project on 56th Street. Neither project will cause strain on traffic, which is good news to residents ears given the scope of the 82nd Street expansion.

Last year, Shevlot met with engineer Dave Keeser to ask him to create a master plan and convince INDOT to approve the funds being used for the trail and road expansion project. The project was granted approval, and the project is already in motion because the city owns the land. To begin the trail project, the city will need to come up with 20 percent of the funds, about $700,000 to $800,000 for the project to begin in early 2016. The council will meet in October of this year to approve the final budget for 2016. Once the budget is approved, the council will establish public forums to discuss the project, take community input and begin the bidding process.

“We’re excited and very happy that we’ve uncovered those untouched funds,” said Shevlot. “And not only that we have the funds to start the project but to complete it. This project will add tremendous value to Geist residents.”

With a background in finance, Shevlot, has chaired the finance committee for years, and now as the president he has greater oversight of all the committees and ensuring that the city is fiscally responsible. Uncovering these funds will have great impact on the community.

This project and others signal growth and increased amenities for Geist residents, which ultimately increases property value and the quality of life. Ultimately, the goals are for the connection of existing and new trails in the Geist area which will offer residents with 13.2 miles of trails. One such project in discussion involves extending the Geist Dam Trail down to 79th to connect under the 79th Street bridge offering connection to the Upper Fall Creek loop located south of Kroger.

While Indianapolis has been leading the way for use of green space and trails, discussions have been ongoing to connect these trail systems to the Monon and White River trails. But closer to home, residents of Geist and Lawrence can feel confident that the City of Lawrence is leading the way to create another piece of the puzzle for the trail system. Shevlot has recently submitted a grant for $30,000 to have planners evaluate and design a plan to connect the trails to Fort Benjamin Harrison, another treasure for the area.

Shevlot is proud of the work of the council and said, “There are many reasons to live in the Geist area, but anytime you can improve the quality of life and raise property values at the same time it is pretty powerful.”

Racing Back Home in Indiana – Bryan ...