When a beloved realtor at the F.C. Tucker Geist office recently came down with an illness, his fellow agents jumped in to do what they could to help. Bobby Cox has been with Tucker since 2007. He has a heart of gold, and his friends wanted to help a man who has always helped others.

The office planned a rummage sale in their front yard. Messages on Facebook and emails went out asking for donations. The results were overwhelming! Within two weeks, the office’s hallways became full of toys, furniture, clothes and home goods.

“It was getting tough to walk through the office,” joked co-manager, Joe Dowd. “Nobody complained because we all knew who it was for.”

The day of the sale was cold and rainy, but the people still came. Some customers even gave extra donations when they heard Cox’s story. Agents from other offices also came by to drop off checks and donations for the sale. Tents were set up in the office’s front yard and parking lot. The Tucker office was transformed into a Geist Flea Market that day!

At the end of the sale, over $6,000 was raised for Cox. When he was presented with a check, there were some tears. For a man who is so used to being the provider, he was now the giver was now a recipient.

“This hasn’t all been easy,” said Cox. “But it’s shown me how blessed I am to have such good friends and family.” 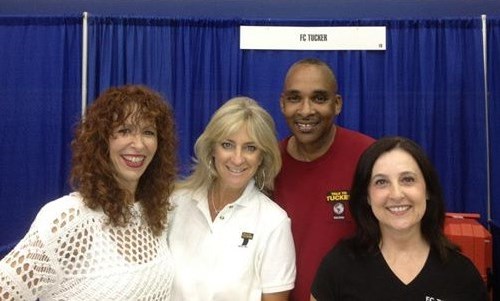 When realtors don’t work, they don’t get paid. Cox’s fellow agents were thrilled that they could come together to help ease some of their friend’s concerns. His friends and family visit him often. In this month of giving, consider visiting a friend or relative in a hospital, a nursing home or in their house if they are home bound. Nothing can make a person feel better than giving!

On the Move with the New Sunrise ...