Girls About Town: Bass Fishing on Geist – You’ll Get Hooked

Considering we’ve lived on Geist for years, you’d think this would have been one of the first stories we covered! Every Tuesday evening from April through October, you can’t help but notice the swarm of bass boats that descend upon Geist Reservoir. All those boats are here for the weekly Bass Club Tournament!

The tournament is in its 34th season. Gary Brewer, the man who started it all, still holds court and keeps people entertained as they come in at the end of the night to weigh their catch.

Anywhere from 25 to 40 boats participate every week. “It’s kind of like a club,” laughed Bob Drake, one of the tournament regulars. He and his friend, Fred Combs, head out to the docks by the Olio boat ramp and wait in their boat for their number to be announced by the call boat. They then speed off to their favorite honey spot to start catching the biggest bass they can land. 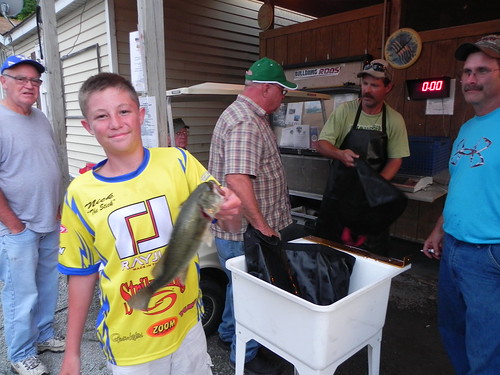 The Tuesday tournaments are open to the public, so anyone with a boat can participate. Just show up at the Olio boat ramp before 5 p.m. and pay your $40 boat entry fee. If you have to launch your boat, that’s an additional $15.

You can also buy a $50 punch card which gives you the opportunity to qualify for the October tournaments. Every time you fish throughout the season, your card gets a hole punched. If you have 12 hole punches, you qualify for the Bass Classic tournament held the second weekend of October.

The top 12 teams automatically qualify to fish in the tournament held the third weekend. The winners of that tournament will get the card money. That Saturday is a wild card event where those who didn’t make the top 12 the week before can still fish. They are competing to make the top three spots. Those top three join the 12 top spots from the week before. These 15 boats head out the next day on Sunday to compete. Saturday and Sunday’s totals are added together.

The top three winners get prize money. Last year’s top finisher won around $2,000. The amount of money won depends upon how many $50 cards are sold throughout the season. Not bad money for a few days of fishing!!

Also by purchasing the season Bass Card, you can win the progressive pot that builds every week. To win the pot, you have to catch a six pound bass. Once a six pounder is caught, the pot starts over.

The camaraderie among the fisherman is infectious. It’s a really nice group of people, and they really seemed to enjoy being out there together. There is a wide age range of participants. We spoke to 15-year-old Griffin Fernandes, who told us, “Fishing is what I love. It’s what I do.”

The amount of the purse for the night depends upon how many boats are entered that day. There are three to five winning spots and a prize for the biggest individual bass. Weigh in is at 9 p.m. The fishermen carry their five largest bass to the weigh station. A fish has to be a minimum of 14 inches to qualify. 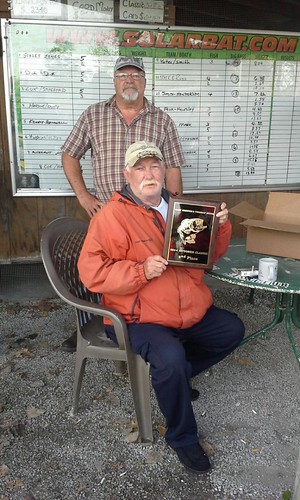 The evening we were there, the winning team was Josh McDermott and Rob Chitwood. Their total weight came in at 14.05 pounds. They went home $340 richer. Four other teams also won money that night. The winner of the biggest bass was Fernandes who landed a 4.73 pound bass! Kenny Phillips, one of the tournament organizers, tells us the largest bass he’s seen brought in on a Tuesday night was 8.2 pounds. That would take some strength to pull in that one!

Because Geist has developed a reputation of being the best bass lake in the state, more and more tournaments are being held here. On Sunday, August 2, the Trophy Technologies Summer Bass Tournament sponsored by Bulldawg Rods, Castaic and Reaction Strike will be held on Geist from 7 a.m. to 3 p.m. The event will be recorded and air on the World Fishing Network, Fox Sports North and Fox Sports South.

Cash and prizes will go to the top 20 percent of the field. The registration fee is $100 per team, and each team receives a $45 bait package. Registration begins at 5 a.m. with meeting and starting positions at 6:40. There will be a 140 percent payout in cash and prizes, and a $1,000 donation will be made to the Wish for Our Heroes Organization. If you would like more information, you can contact Gary Straber at 317-431-7745.

While many of us think of Geist as a great place to water ski, sail, tube or just hang out with friends in a cove, Geist is developing a solid reputation as a top notch bass lake. So grab a fishing rod and bait, and don’t miss the opportunity to take in some great fishing! Our guess is… you’ll get hooked!