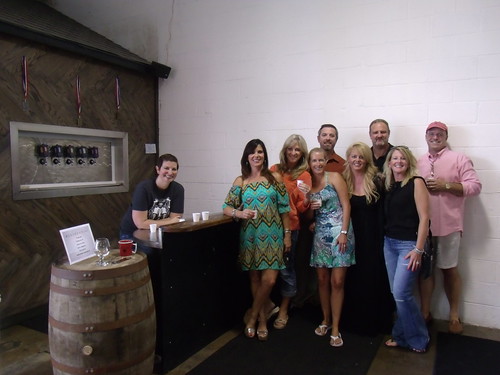 When you think of breweries in Indy, you probably think of Broad Ripple or downtown. Well, guess what ~ you have one right here in your own backyard. Located just north of the railroad tracks off Olio Road in McCordsville is a new brewery called Scarlet Lane Brewing Company.
This hidden treasure opened in May and is off to a great start! You can already find its offerings in more than 65 locations around town. It produces between six to eight ales at any given time. It is constantly adding to its collection of Hoosier crafted ales. So, if you fall in love with one of their selections this week ~ stock up!!! It might not be there next time.

The night we went with our friends, we sampled all of its selections. The girls really liked the Humbled Peach! This started off as a seasonal beer, but it was kept on due to its popularity. The owners never thought a peach beer would take off here. They were happy to be wrong. All natural organic peaches are used for this beer.

Dorian, Vivian and Silas are Scarlet Lane’s three most popular beers. The Dorian is a coconut coffee stout and was a favorite with the guys. That night the Scarlet Lane Brewing Company also had the Paeonia Farmhouse ale made from the Indiana state flower. Did you know that was the state flower? We didn’t!

What a great way to experience Hoosier roots! We could really taste the different flavors in all of the samples we tried.

This whole enterprise started seven years ago with a brew making kit given to the company’s CEO, Eilise Lane. She fell in love with tinkering around with different ingredients and trying to brew the perfect beer. After years of perfecting her craft and completing her education at the American Brewer’s Guild, while shadowing at some of her favorite Oregon breweries, Eilise made the jump and opened her own brewery. She wasn’t alone though. She got the help of six of her friends. These college-educated friends came back to their Hoosier roots to start the launch process for Scarlet Lane Brewing Company (SLBC). They then began the process of creating a unique brand of ales. Their mission is to be your humble brewers promoting knowledge and continued betterment in the art of beer making.

Located at 7724 Depot Road in McCordsville, SLBC is a warehouse marked by its scarlet red door propped open by a 10-gallon bucket filled with fresh Indiana corn. When you walk in, you’ll see the large stainless steel kettles that brew the beer. You’ll also be greeted by one of the six owners serving samples behind the bar. This isn’t a restaurant; this is a working brewery that also happens to have all of its beers on tap for you to taste before you purchase. Bring in your growler (see Fun Facts) to have it filled with one of their beers. Filling a growler costs $10-$15, depending on your choice of beer. If you go empty handed like we did, you can buy a growler there. FYI…your growler must be clean in order for them to be able to fill it. SLBC is also in the process of obtaining permission to be able to serve customers in a more traditional pub way. Watch its website for information.

Oh, wait! It’s Sunday, and you forgot to buy beer before heading to the lake?!? Scarlet…frankly my dear, I don’t give a dang! Grab your growler and get a refill here from 11 a.m. to 3 p.m.! For poor planners like us, this place is a dream on Sundays! This place can make your SuNdAy FuNdAy!!! 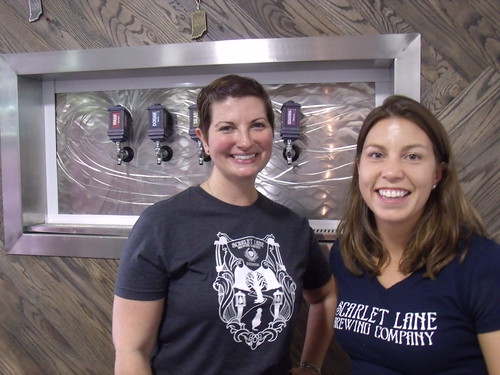 There are a lot of fun events coming in the month of September that SLBC wants you to know about! They will be at the Taste of Hancock County on Sept. 13. Also, join in the Literary Pub Crawl on Mass Ave on September 20. (I suppose we can skip book club for September because we will be doing this!) How about dressing in white and heading downtown to the Circle on Sept. 21 to enjoy “Le Diner en Blanc”? SLBC will also be part of the fun at the Colts Tap Takeover Tavern on Sept. 28. Most importantly, don’t forget to stop in and say “Happy Beerday” to Eilise on her birthday on Sept. 7! With so many beers to enjoy and so many places to enjoy them, what’s not to love about Scarlet Lane Brewery? Frankly my dear, we DO give a dang!!! Cheers!

Dirt is Turned on a High-Profile Development ...