You might have heard of Jeff Knurek from the classic Jumble puzzle which happens to appear in over 600 newspapers around the world. Each Jumble requires the unscrambling of words to solve the clue presented in the cartoon. Knurek creates the drawings while his partner, Mike Argirion, is responsible for the words for this classic brainteaser that has been around for about fifty-five years.

Living in the Geist area, Knurek represents a very busy and interesting man with quite a creative imagination branching out into many different areas. During our interview, I was surprised to learn something even more amazing about him with every new answer to my questions.

A couple years ago, Knurek replaced Henri Arnold as the Jumble cartoonist. Up until this time, Knurek had worked on the drawings for many of the Jumble brands in the “minor leagues” before landing this reputable spot.

Knurek also is co-creator along with creative partner, David L. Hoyt, of the puzzle, Word Roundup found in USA Today, as well as syndicated puzzle based on the classic word game, Boggle, called Boggle Brainbusters. Jeff’s puzzle inventions include several variations of Jumble found online at Jumble.com. If that’s not enough, he is even moving into the realm of creating games for iPhone.

In addition, Knurek partners with a magician in Las Vegas, Mac King. Jeff serves as the “Licensing Director” for Mac’s “Magic in a Minute” children’s magic line of tricks, books, kits and promotions. Knurek is excited about releasing Mac’s new book titled Scout Magic coinciding with the 100th anniversary of Boy Scouts of America. Knurek is working to have Mac perform at the Boy Scout National Jamboree in July. This new book, due out in February, can now be pre-purchased on Amazon.com. 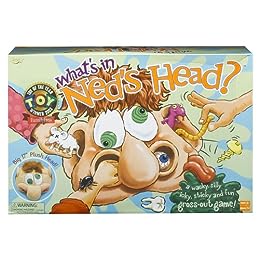 "What's In Ned's Head" is a game invented by Knurek available through Target stores.

Knurek fulfills another interesting role—toy and game inventor. His most popular game is titled, “What’s in Ned’s Head?” which is geared toward ages four and up.

“It’s icky and gross. That’s what it’s all about,” says Knurek who came up with this idea when asking his inventing question, “What if?” He was wondering, “What if you could reach inside your head? What would you find?” This game comes with a large seventeen inch plush head (Ned) with an assortment of gross things put inside the head such as a worm, fried egg, dirty ear wax q-tip, tongue and moldy cheese. Players are dealt a card with a picture of the item to grab from one of four holes. The first player to successfully find his/her item is the winner.

Soon, the Target stores will be promoting “What’s in Ned’s Head?” This popular game has received several parenting awards. Also, many schools are using this game as a secondary bonus to their classrooms and as an adjunct to speech therapy.

Besides being known as a lighthearted, creative cartoonist, licensing director and game inventor, perhaps Knurek wishes to be remembered as one who fulfilled a brotherly duty for his cousin who suffers from polycystic kidney disease. When he first found out about his cousin’s prognosis seven years ago, Knurek foresaw the inevitable need for a future kidney transplant in his cousin’s future. Knurek knew deep within his heart that he wanted to be the one to step up and serve this man, Bobby Keedy, whom he had grown up with as neighbors and playmates. Keedy has always been like a big brother to Knurek as he is seven years older. Throughout their childhood they would play games and bring out the most competitive spirit in one another.

It’s not surprising then that Knurek attended the University of Michigan while Keedy attended a major rival, Michigan State. When Knurek initially announced to his wife, Kathy Kent-Knurek, about wanting to donate his kidney, she warned him that his chances were slim, especially since he didn’t even know his own blood type yet. Kathy, a pediatric nurse practitioner, once worked in an organ bank, and knew of the complications involved with this major undertaking. Self-portrait of Knurek in his home office.

Eventually, Knurek’s ambition would merge with fate, as he did indeed donate his kidney to Keedy, successfully. The irony behind this transplant was that the hospital setting was on Knurek’s turf at the University of Michigan. Knurek laughs as he proudly sums up the operation with his cousin, Keedy, “He’s now got a little Wolverine in him.”

Knurek admits that it was Keedy who truly inspired him to become a game inventor because Keedy would often come over to Knurek’s home as a kid and play games with his family for hours. Their childhood reflects an enthusiastic intensity within all their games.

“Playing Euchre was a full contact sport,” recalls Knurek who claims that Keedy brought an unforgettable passion to every game. This competitive ardor has deeply inspired Knurek’s desire to create games that help him resonate back to his most positive childhood memories.

Knurek and his wife, Kathy, have two children: a daughter named Sydney, who is 10 years old and a son named Cameron who is 8 years old. Knurek brags about how both of his kids show early signs of remarkable creativity. He leaves us with what he hopes to instill in his children:

“I want to let them know that they can do anything they want. My donating a kidney was all about doing the right thing, even though it wasn’t necessarily the easiest, and that anything is possible.”