A Lighthearted Look at the Art of Gabriel Lehman

Artists have fascinated viewers with subjects seemingly sculpted from light, in oils on canvas, for centuries. A few of the earliest and best known, Caravaggio, Lanfranco or Rembrandt, may come to mind, or a later artist, perhaps a Renoir, Rousseau, or Parrish. And of course, there’s the artist who is your own personal favorite.

But now, a new face in the arts community is captivating viewers with his use of light: Gabriel Lehman. Using acrylic paint to stunningly illuminate playful subject matter, light is a hallmark quality of this Noblesville artist. New on the local art scene—arriving two short years ago—Lehman is already building a buzz and a distinct following in a remarkably short time. 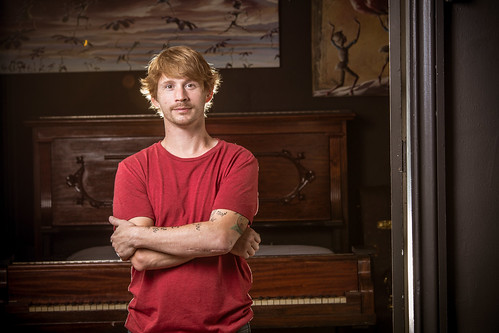 The reason? Viewing Lehman’s work is absolutely riveting. Those casually passing by do double-takes as exuberant subjects whimsically float, dance, bike and dream across surreal landscapes amid puffy clouds. Those who pause to take a deeper look at his paintings invariably go away with cheerier expressions and lighter hearts. That’s when this new-to-Hamilton County artist feels he’s met his goal.

“I celebrate the light within, the light that illuminates the human spirit.” Lehman goes on to explain that the personal challenge in each of his paintings is finding the essence of the subject and illuminating it using indirect light.

“Truth is projected by the light within. Light evidences who we are as individuals and how we live. I celebrate the light that comes from within the human spirit. God gave me this gift. I’m just trying to use it the best I can!”

Born in North Dakota and raised in Indiana, Lehman is a relative newcomer to Hamilton County, finding much to celebrate around his new studio-home near the courthouse square. “Individual celebration of life’s little moments—this is what I work to capture. I constantly watch for people caught up in the joy. For example, this morning I saw a woman riding a bike. She stopped by a planter filled with flowers. She was taken in by their beauty—and she really, really looked at the flowers. She lit up with happiness. Then she rode on. She had taken time to celebrate the beauty.”

In his next breath, Lehman continues, “Because of this, I often tell people: life’s not all about work…but, ha! I should listen to myself. I work constantly. It just seems that when I paint, time flies…12-16 hours pass so quickly. I live and work at my studio, so I paint every day. Sometimes I catch myself thinking, hey, you should eat: you should sleep, but oftentimes painting is such fun work! As well it should be. It’s work, but it’s not like curing cancer. No one dies if paint isn’t applied right!” 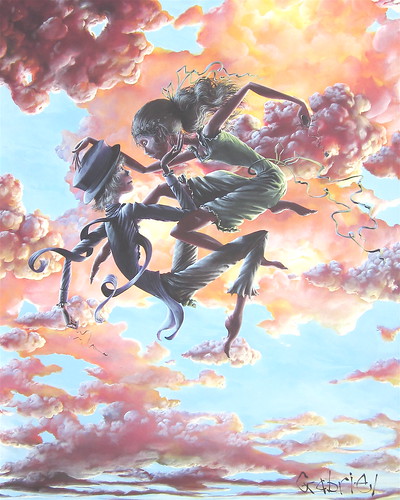 A self-taught artist who largely learns by watching films…
Lehman credits filmmakers as an influential group who share his love of light. “Teams of people devoted to capturing light are assembled….I pay close attention to what they do and how they work with it.”

Lehman also cites a number of painters who have influenced and inspired him. He lauds classical German painters for their mastery of shape, shade and hidden light sources and several more contemporary artists, including Rene Magritte, Salvador Dali, and Dr. Seuss(!). “The artists whose work I enjoy most excel at making things look and feel real when they paint from imagination.”

Music fuels Lehman’s creative fires and brings balance to his work
In addition to a ‘day job,’ Lehman has played music as side work for years. His natural affinity for music causes him to depend on music while he paints, to heighten his creativity and maintain his momentum. “Music inspires me to push boundaries—especially music by independent musicians who incorporate unusual sound effects into their mix. I love surprise elements, for instance, a creaking door…anything unexpected.”

As he encounters these new musical elements, they flow into his work and provide mental exercise. At the same time, bulky brushes and quick strokes provide physical exercise. To maximize his workout, he switches his brush, hand to hand.

“The combination of mental and physical exercise keeps me alert. The idea of using both hands came to me one day while I was playing my guitar. I suddenly realized how efficiently my hands worked in harmony to balance one another. I’ve used the technique ever since. It works both hemispheres of my brain. Creatively, this is very important.”

From Indiana to Tennessee and North Carolina…then back home again! 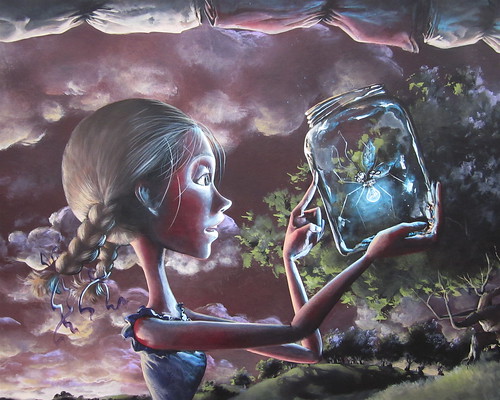 Creativity has never been in short supply in Lehman’s life. He grew up in Elkhart, Indiana, and lived there until his late twenties when he left for Nashville, TN. From there he moved to Wilmington, NC, and there discovered his interest in painting. His interest strengthened to the point it finally took precedence over his music.

“I just realized one day, that I felt happier painting than I did playing music. I grew obsessed with paint. I fell in love with it! Paint became my world. I started living paint…hour after hour…day after day.”

From then on, painting was his full-time job. A single father of two sons, he worked hard at his craft to make a living, while gaining an ever-increasing number of collectors, especially with the entry-level collector ($300-$1,000).

“I love painting for the entry-level collector. It’s surprising how many will purchase their first piece, saying they’ve never bought ‘art’ before. They start out asking if I can hold a certain one or if I take payments. Of course! It warms my heart knowing my work has such meaning for them. Consequently, these new collectors mean a lot to me—and often become good friends.”
Continuing to speak of the importance of relationships with his clients, Lehman says, “I’m very grateful that I wasn’t picked up by an agent. In selling my own work, I’ve made so many wonderful friends among the people who collect my paintings.”

While some of Lehman’s collectors live as far away as New York and he briefly considered moving there, it was encouragement from family in Indiana who caused him make his decision to return to his home state.

“I moved home to Indiana knowing I had a good following around Indianapolis. The Noblesville arts community was welcoming. When I spoke to Ailithir McGill of the Nickel Plate Gallery and showed her my work, she agreed to hang it, telling me it could attract a whole new generation of collectors. That was one of the greatest compliments I’ve ever received.”

Lehman’s work can be seen for sale at the new Ville Restaurant, the Logan Street Sanctuary, Nickel Plate Gallery and Deer Creek Community Church where he is painting a mural.