Avon resident Tony Gude didn’t like what he was seeing.

He was witnessing, before his eyes, a social divide throughout the United States and even in his hometown of Avon. So over this past summer he decided to do something about it. What manifested from that idea is something many Avon residents are already familiar with – a lip dub video. Much like the viral videos Avon High School has produced in recent years, Gude’s plan was to spread a message.

“A national, social issue came to the forefront that affected millions,” Gude said. “Over the course of several months, we had police officers needlessly killing minority men at a surprising rate. We had people killing innocent officers across the U.S. in what they called retaliation … I could see a racial divide happening in front of my eyes. I knew if something was going to happen with this project, it had to happen soon. I started to see even in our town some small signs of this divide.”

The idea of a town-wide lip dub had been on Gude’s mind for a while. As the owner of GudePro, a photography and video services business in Avon, Gude was toying with the idea of a lip dub video to support family-friend, Ben Harmon, who had been diagnosed with a rare form of cancer. However, once he started planning, he realized the town was already providing a lot of support to Harmon, so he switched gears. He set out to highlight to social issues many in the nation were experiencing. Most of all, he wanted people to see it didn’t have to be that way.

“When doing this project, my vision was to portray how I’d like to see the Town of Avon and how I’d like others to see the Town of Avon : as a diverse and inclusive workforce and engaged community actively pursuing unity,” Gude said. “I wanted the diversity of the video to include the representation of not just white men, but also women and minorities at all ages, lifestyles, and cultures, while also integrating people with disabilities, veterans and service members. Just a simple message to show the world that Avon is one.”

So with that idea in mind, he went to work. Gude said he began trying to recruit people he thought might be interested. He also enlisted the help of his son Brody, who was involved in the most recent Avon High School lip dub.

“I thought they did an amazing job with their resources, marketing, and more importantly it was for an outstanding cause,” Gude said. “I always felt that our youth had put Avon on the map, whether it was academics, athletics, or the education system. I thought it would be great one day to show people that the adult community members were just as fun. Not in a competitive way with our youth, but in a synergetic way.”

So in early May, Gude put out a call-to-action in an Avon Facebook group to gauge interest in a community-wide project.

“The response was so overwhelming that I had to suspend the post in about a half days’ time,” Gude said.

Before closing the post, Gude gathered the contact information of those wanting to be involved and began assembling his team.

“I contacted Michelle Madding, Erin Schwein, and Ronn Mesarosh to see if they could help sort out all the madness on paper,” he said.

From there, they came up with the rough estimate of needing enough people to fill 78 lines and started brainstorming participants.

“Piece of cake,” Gude now says, with a hint of sarcasm.

But by mid-June, Gude was beginning to wonder if the project would ever come to fruition. He even thought about shutting down the project entirely. What happened next was a bit of good fortune.

“One day Robin Pickett calls me out of the blue and wanted to meet to discuss photography services,” Gude said. “During our meeting I noticed that she shared some of my same passions about people and the community.  I openly discussed with her my vision for a town lip dub and without hesitation she asked how she could help.”

From then on, Pickett served as an assistant on the project, helping Gude the rest of the way.

“She took what I had done and began working non-stop to schedule, contact and coordinate everyone involved,” Gude said. “Everything started to fall into place. One of the things that we quickly realized when trying to schedule and film this many people by a deadline, which was quickly approaching, was that we could not ask people if they were available to shoot the parts that we had given them.  That was a nightmare.”

Their solution was to plan five or six shoot dates and allow people to sign up for what days fit their schedules best.

“Each session only took minutes for individuals or about a half hour for groups,” Gude said. “The ‘train’ group took a little longer because we were actually – for once in our lives – waiting for a train to appear.”

Helping to add a little bit of flair to the project, was the idea to incorporate well-known residents and some local celebrities like WTHR’s Chuck Lofton and Bruce Kopp and WISH-TV’s Nina Criscuolo. 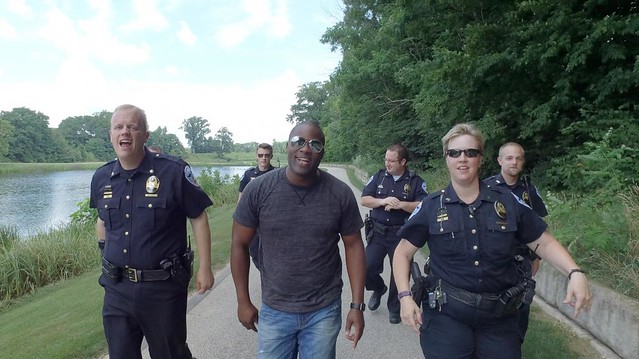 “Prior to this, I had not met a good majority of the participants,” Gude said. “But leveraging the power of social media which is designed to connect, network, and share, we were able to meet and contact some of our local celebs like Nina, Bruce and Chuck. They did not hesitate in wanting to be a part of this either.”

Gude also enlisted the help of several town officials and business owners in the video. But anyone who wanted to be involved was allowed, Gude said.

For the most part, Gude did all the filming and editing, except for the opening scene, which he was in with officers from the Avon Police Department. For that scene, he relied on an experienced stand-in to take over filming.

“I leaned on Suketu Patel — one of the masterminds behind the Avon High School lip dub — to shoot for me on that day,” Gude said.

Following each day of shooting, Gude said he would go home and place the clips where they belonged so they would match up with the song they chose:  Justin Timberlake’s “Can’t Stop the Feeling.”

“I did this until our finale on Aug. 27 so that when I was finished with the last portion, I could drop it in at the end and upload the final product,” he said.

By the end of the project, Gude said the hours had added up.

“It took me about six hours to shoot everything and about 20 hours of hearing ‘Can’t Stop the Feeling’ over and over,” he said. “(Plus) countless hours of planning and executing.”

Despite the long hours, Gude said it was worth it as the video was well-received. Currently, the video has been viewed more than 17,000 times since the Aug. 27 upload.

“We’ve received so many messages, thanking us for our efforts and time and also showing Avon in the same way they see Avon,” Gude said. “I’ve even received messages from people outside of Avon saying they really wish they lived in a community like this. I loved how it turned out and I believe it accurately displayed the vision of the project.”

Gude’s only regret was not being able to include everyone.

“We just could not fit everyone in unfortunately and I felt terrible about it,” he said.

As for the next project, Gude said he hasn’t had much time to think about it.

“Hopefully, in a couple of years, we can do something different, but just as engaging,” he said.

For now, Gude is staying busy with his business GudePro, which he started with his wife Jill in 2010. He also volunteers his services for the Avon High School football team’s highlight films, social media activities and as a webmaster for the QB Club.

For more information, visit his website gudeprophotography.com. To watch the video, go to Youtube and search for “Avon Town Lip Dub 2016.”