The phone was ringing at Kristi Meinert’s house. The caller was from the adoption committee in southern Indiana where Kristi had recently traveled to interview. She had wanted to adopt a young girl, but the agency wanted her for someone else: they had a boy with special needs who needed a home. Kristi wasn’t sure what she would do until she saw his picture.

Kristi, guidance counselor at North Central High School and mother of 10, has always wanted to adopt.
As a graduate of NCHS, Kristi stayed at home with her oldest children, Gabi and Zander, before becoming a guidance counselor. She has worked at NCHS for 13 years, and her agenda includes working directly with over 350 kids: helping students plan their schedules, guiding students through the college admission process, helping eighth graders navigate the high school and coordinating Advanced Placement and ISTEP. 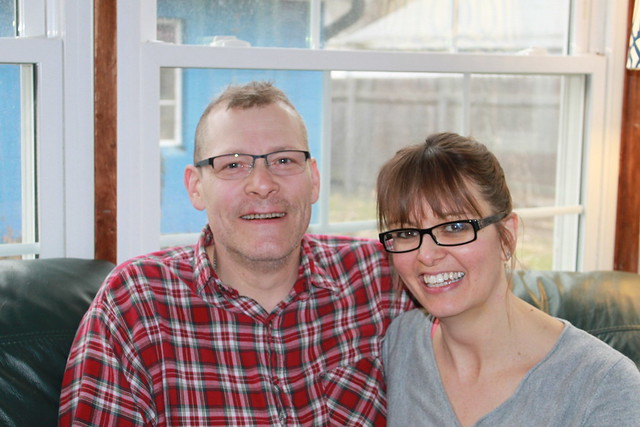 The biggest part of Kristi’s job is managing students’ challenges: relationship issues, anxiety, abuse and even homelessness. “There are a lot of tears,” she says. “There’s so much that you can’t fix. There’s a lot of sad, so I use a lot of humor,” says Kristi.

But when Kristi returns home for the day, her house is anything but sad.

Her oldest daughter, Gabi, a NCHS graduate, enters the living room of their small but cozy Broad Ripple bungalow. Gabi recently earned her degree in anthropology and is an avid rock climber. Gabi loves the big family. “I always say it’s kind of normal. I love having everyone around,” she says.

But everyone is not always around at the same time. Kristi’s oldest son, Zander, is off teaching Saturday Science at NCHS. Later, Kristi will pick him up and buy groceries on the way home.

After her first two children, Kristi began the adoption process. Kristi soon found herself answering that call from the adoption agency in southern Indiana. It was about Philip, and judging by his case file, she was certain he had autism. Kristi thought she would travel south just to interview but not commit.

“And then I saw his picture, and it was over,” says Kristi, remembering the moment she decided she wanted him. Phillip runs from the basement to wave hello, taking a quick break from video games.

Now a teenager, Phillip was only 2 ½ years old when he joined Kristi’s family, and she immediately began intervening to help him progress academically and socially. He is now performing on grade level and is on track to attend college. Switching to a gluten-free diet made an amazing difference for Phillip.

“It’s like a light switch came on,” says Kristi who was astonished to see her once quiet son begin communicating.

But Kristi was not done yet. Ten years ago, Kristi decided to adopt again, and the family journeyed to Kansas City to meet a sibling group of three. In just a short time, Ebony and brothers Jamal and Quinn moved to Indy and turned Kristi’s family into a family of six kids.

Daughter Ebony was 8 when Kristi adopted her. Now she sits at the dining room table, enjoying a cup of coffee. She will graduate from NCHS with an honors diploma and attend IU.

As time went by, Kristi divorced and remarried Graham, whose young kids Guerrin and Chloe made them a family of 10.

Kristi and Graham soon had another daughter, Piper, who was born with Down syndrome. “As soon as I saw her eyes, I knew,” says Kristi. “Down syndrome wasn’t foreign to me.” Her best friend’s son had grown up with the condition.

They started aggressively treating Piper’s conditions, doing continual and comprehensive therapies and doctor’s visits. Piper, who is 5 and loves hugs, reads at the top of her preschool class.

Finally, two years ago, Phoebe was born. For now, Phoebe is enjoying puzzles and having tea parties. And the family is now a family of 12.

As the kids grow up, the house grows less crowded. Zander and Ebony are both graduating, and Gabi is out substitute teaching and working at REI. Gabi plans on returning to school and earning her nursing degree. Throughout her undergrad, she “lived” on campus.

“Except she was home four days a week,” laughs Graham.

“This is still home,” replies Gabi, taking a sip of her coffee. “I love having everyone around. The quiet [at school] is terrible.”

Kristi and Graham don’t have a problem staying busy, even with a few kids off to college. Between hockey, basketball, book club, Science Olympiad, internships and therapy – not to mention laundry – the schedule remains hectic as they ferry the kids back and forth in their 14-passenger van.

Now that the kids are getting older, Kristi is hoping family outings to the zoo or the pool won’t take 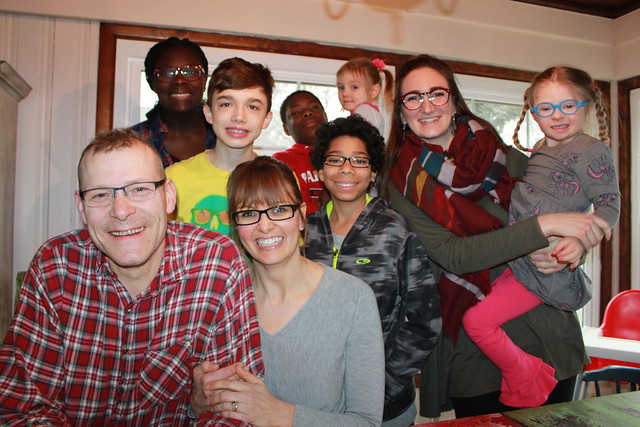 hours to prepare. “I’m exhausted by the time we get into the van,” she says.

“We don’t screw up too often,” laughs Graham, reviewing their busy schedules. Graham had just returned from picking up Quinn from a pancake breakfast. Soon, he will be off to the high school to retrieve Zander and then off to hockey for son Guerrin.

While the family stays busy, they still find time to be together. Everyone attends the annual DADs Hayride for children with Down syndrome. The family also gathers most nights for a homemade organic meal, sometimes around two dining tables. “We have all these kids with all these different moms and dads and backgrounds. Pretty much anyone will eat anything you put in front of them,” says Kristi.

Work is never really over for Kristi and Graham. If she has a five minute break, she’s researching something for daughter Piper or simply sitting on the couch and catching her breath. But even as the family begins to spread out, Kristi is looking forward to everyone’s company during the summer. The noise, the chaos, the fights over bikes and toys and the busy lifestyle is just what everyone loves.

“It’s a fantastic mess,” says Graham, who grew up with four siblings and is used to fights and messy floors. ”Sometimes you just step over the mess and ignore it,” he says, peering over at a bookshelf full of toys and a puzzle on the coffee table.

Kristi, who grew up an only child, quickly adds, “This is never boring, right?”

“For me, it’s what it’s supposed to be,” says Graham, who occasionally breaks up fights among the boys. “I did buy boxing gloves and headgear,” he laughs.

Daughter Ebony quickly chimes in. “I would be so bored if I didn’t have all these people to be around. I worry when I go to campus and I’m not going to have Phillip or Quinn or Jamal bugging me,” she says.

Soon, everyone is gathering around the dining room table, smiling and hugging for a family picture. In no time, they’ll be on their separate ways, to practices, dates, work, sports and school.