A Love Letter to WWII 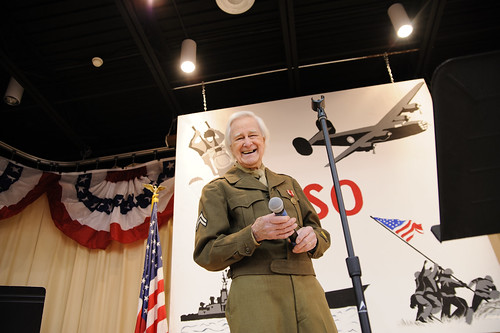 While stationed at Camp Atterbury, preparing to be shipped overseas, Cpl. James McDowell was placed into the U.S. Army Medical Corps. Thanks to his typing skills (he took six semesters of typing at Lincoln High School, in Neb.), McDowell became the triage typist admitting injured soldiers into the hospital. He was part of the 231st Medical Corps, which was placed in the middle of the busiest U.S. Army Air Corps unit of WW II: the 8th.

Recalling his time spent at Camp Atterbury, McDowell shared his first encounter with Col. Lynwood Gable, a decorated surgeon from the Great War (WW I). Gable climbed out of a car and, upon seeing the unit he was to command, declared, “What did I get myself into?! Bring me a Coke! In fact, bring me two!” McDowell wasn’t sure of the significance of the cola request, but the colonel told his unit that they would be turned into “the best damned medical unit in the Army.” And based on the history books, it sounds like it was a mission accomplished. 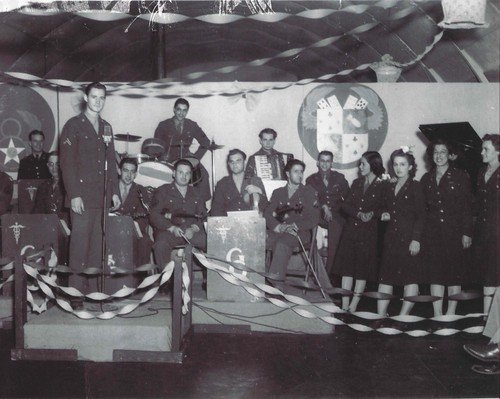 Jimmy Mack and the Gable Gators

Gable was a music lover, and he held auditions for a band. McDowell was chosen as the lead singer in what became known as the Gable Gators. He is a natural performer and had gained much of his experience as a schoolkid. He loved choir and sang whenever he had the chance.

On a trip to Indianapolis to buy sheet music, McDowell met the love of his life. Peggy Million worked at the Pearson record shop in downtown Indianapolis. It was love at first sight. The couple developed a relationship over the next several months before McDowell shipped off to England, proposing marriage to her before he departed. Every day he wrote love letters to his “one in a million.” Peggy wrote to him as well.

After spending their first six months at Red Grave Park, the 231st Medical Unit was placed in Norwich. The hospital served the notorious 8th, who were the flyboys bombing German positions across the English Channel. Each day a squadron of bombers would leave and all prayed they would return. McDowell said the casualties were high and they would see the bombers returning with holes in the planes, hoping they would land safely.

German “buzz” bombs were the main threat to the base. McDowell recalls hearing them. If the buzzing stopped, it was time to head for shelter. The fog presented another challenge. Many days they could not see their hands in front of their faces. McDowell and his unit strung stakes with string to help guide them from their barracks to the hospital ward.

On Friday and Saturday evenings, when the men weren’t working in the hospital, the Gable Gators entertained the 8th U.S. Army Air Corps at their base in England. The band gained popularity, even having some hits of their own over the airwaves. The band performed at numerous bases around England, entertaining not only the Americans but the English troops as well.

A highlight of McDowell’s 2.5 years stationed overseas occurred on August 18, 1944, the evening he met Glenn Miller. McDowell was actually a patient in his own hospital that day with a toothache on the left side of his mouth. A band member informed McDowell that not only were they requested to perform at the officers’ club that night in Attlebridge, but prior to their performance, Maj. Glenn Miller would be giving a concert in a bomber hangar on the same base. Determined to attend the performance, as well as sing with the Gable Gators, McDowell iced his swollen jaw all afternoon to prepare. McDowell succeeded not only in seeing Miller but also in being introduced to Miller and having a photograph taken with him in the men’s latrine.

McDowell became best friends with one of his fellow Gators, accordion player Lenny Kratoska. The two of them had the idea to start a radio station on base. Gable thought it was a splendid idea and pledged funding. The men went to London to buy the equipment, which included a huge transmitter. The guys figured out how to wire the hospital wards (barracks) with speakers on either end replete with volume controls. The guys took turns on their off-hours to play records for the healing soldiers in their hospital. A true morale booster, the radio station was extremely well received, and the patients made requests and dedications for the disc jockeys.

Returning from England aboard the U.S.S. Enterprise, McDowell says that one of the most amazing moments of his life was standing on deck with the other soldiers in their dress uniforms saluting Lady Liberty as they cruised into port.

McDowell was discharged through Camp Atterbury, which allowed a convenient reunion with his fiancé, Peggy. Peggy, who graduated from Butler University’s Arthur Jordan Conservatory of Music, accompanied McDowell to Chicago. McDowell attended the Columbia School of Broadcasting, along with his buddy Kratoska. Kratoska became the music director for WBBM in Chicago, holding the post for 40 years. After graduating, McDowell and Peggy eventually moved to Indianapolis to settle down.

McDowell became known as Jimmy Mack (the nickname came from Kratoska, and Jimmy returned the favor, giving him his nickname of Lenny Kaye) and enjoyed a long career in broadcasting in Indianapolis. Jimmy and Peggy bought a home across the street from where Peggy grew up in Broad Ripple near the White River Yacht Club.

The McDowells’ extensive list of credentials and accomplishments defies comprehension. Their careers revolved around entertainment. Both developed radio shows, performed and raised three children. Among other things, Jimmy had a television show called “Teen Twirl” on WISH-TV and was a local radio personality. Peggy was a talent agent, and both performed with Footlite Musicals. Peggy and Jim were quite the pair. 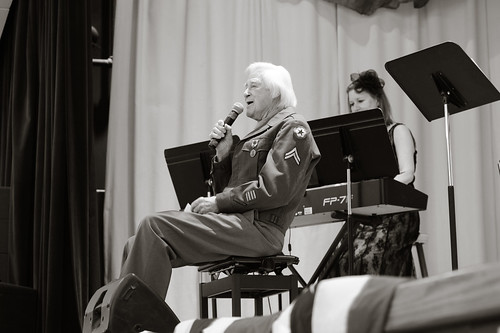 Now 91, Jimmy Mack still performs occasionally. I’ve had the pleasure of seeing him perform a few times, and he does it flawlessly. Seeing him onstage, still able to wear his uniform from WW II, it is easy to picture the boy of 20, singing for the airmen, “I’ll be seeing you, in all the old, familiar places…”

Jimmy “Mack” McDowell’s story is one of 84 Hoosier recollections from WW II featured in a book, “WW II Duty, Honor, Country,” by Steve Hardwick and Duane Hodgin, found on barnesandnoble.com.