Back On the Water & Better Than Ever 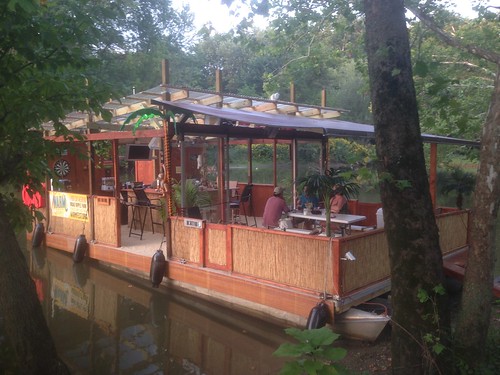 John Hughes says he is on vacation for a living. “I haven’t been on vacation since I built my first tiki bar,” he said. “I don’t feel the need anymore.”

Hughes, an Indianapolis native, is well known among the White River residents for his “tiki barge”—a mobile tiki bar built on pontoon boats that takes regular trips down the river.

Hughes got the idea to build his first tiki bar after a trip to Jamaica, where he saw these novelties everywhere. He inherited a pontoon boat from a landlord of the house he was renting, and an idea was born.

He put a thatch roof over the captain’s helm of the boat, and soon people started flocking. Knick-knacks slowly accumulated—bras and panties hanging from the ceiling, dollar bills everywhere. “It was just full of all kinds of stuff,” he said. “People loved that boat.”

He would take friends on rides for gas money—he can’t offer rides to the public and doesn’t take reservations—and could make the 4.3-mile trek down the river in a couple of hours. “It wasn’t about the speed,” he said. “It was about how much fun you had.”

Then, around 4 a.m. on Wednesday, April 30, an electrical fire destroyed the boat. Hughes arrived to watch the last of the smoke rise and ashes fall. “I didn’t know what I was going to do,” he said. “That was my toy, everybody loved it….That first day, I just sat with my head in my hands.” 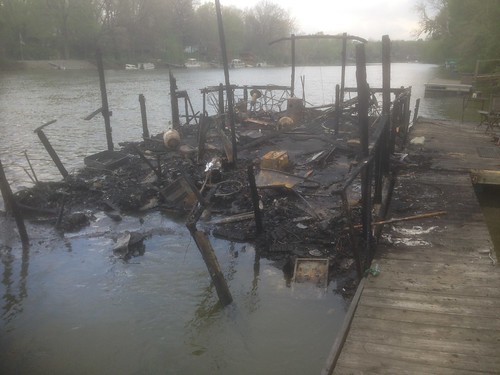 A day later, he got a call from a friend at the yacht club in Broad Ripple who said they were going to raise money to rebuild the boat.

When it was over, Hughes had $20,000 to rebuild his dream. “The turnout blew me away,” Hughes said. “I had no idea people loved that boat that much.” He began building three months ago, with the help of a few friends—“a carpenter and a guy who would do anything.”

He put the boat in the water July 1, just in time for the fireworks on the river. But he isn’t done building what he calls “the greatest thing I’ve ever worked on.” He still has doors and windows to add, as well as adding some hi-tech features such as projector screens.

“I can’t believe how generous and kind people are,” he said. “I’ll never find this anywhere else in the world. Hell, I can be an 80-year-old crotchety man giving people boat rides. This thing is going to last forever the way it’s built.”

And, this time, he has insurance.