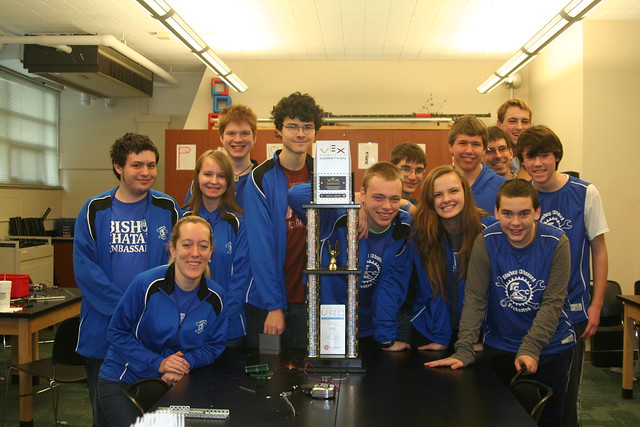 “We’ve been working on the robot since September 3 for about three hours a week,” says senior Joe Bormann. “The really rewarding part about being on this team is the success we’ve had so far. Last year did not go well and it feels really great to have created a robot that is working properly.”

This city tournament allows only one robot per school. By the time schools compete at the state level, schools will be allowed to bring multiple robots representing each team.

“Mayor Ballard has really pushed to get schools involved in this city tournament,” says Amanda Horan, coach and chemistry/physics teacher at Bishop Chatard High School. “This represents an important educational initiative as the size of the city tournament has grown bigger each year.”

In fact, more than 130 school teams participated in this city tournament made up of not only high school but also middle-school and elementary levels.

“At the high school level, the robots are made of metal unlike the plastic used in younger grades,” says Gary Pritts, coach and chemistry/physics teacher at Bishop Chatard High School. “The high school kids create bigger and more complicated robots using power tools and customizing parts. Each year the competition has gotten more difficult with taller competition objectives.”

The Trobotics Team made up 27 teammates including eight girls, all whom have different interests outside of robotics ranging from athletics and music to theatre. Though they may bring varying talents to the table, one thing is for sure, they all share a special camaraderie and team spirit. This bond, more powerful than any robot, attributes to their success.

The competition involves eight rounds of qualifications with two alliances made up of two teams each that are randomly selected. Following that are three rounds of elimination, which is made up of an alliance of three teams where two perform at a time. The championship finalists get to choose their own teams based on performance in qualification rounds.

“Each year the VEX tournament presents a new game,” says Horan. “This year, teams had to collect points by stacking yellow ‘Skyrise’ pieces and picking up cubes with their robots and placing them on gray poles or the yellow ‘Skyrise’ pieces. Part of our success was choosing the right teams in our alliance. Matthew Hawkins was instrumental in researching the contenders that would serve as potential allies.”

“I decided to start scouting the other teams because I knew that our robot was going to be in the top eight (based on qualification rankings),” said senior Hawkins. “We talked about doing this last year but we never really had a chance to be in the top eight. I recruited some other people to help write notes and take pictures. Everyone said that it really helped and we plan on expanding our notes at upcoming competitions.” Pritts adds, “These kids from all these schools have nothing in common other than these robots. It’s neat to watch how they work together and strategize to form an alliance.”

The Trobotics team is scheduled for three upcoming competitions and hopefully will go to state. Follow this team on Twitter.

Horan brags on the students when she says, “We’ve been blessed with these kids. They are so dedicated. They ask us [coaches] to have practices for them on Saturdays and school breaks so they can work more on their projects.”

Here is what some of the Trobotics team members are saying about their experience:

“The thing I find rewarding is that it gets my brain working and allows me to meet other people. Also it helps with engineering and communication skills.” (John Pruitt, junior)

“Being on Trobotics is so cool! You’re basically given a bunch of parts and told ‘Build an effective robot.’ From there you can do anything – the possibilities are endless.” (Rachel Cavender, freshman)

“It’s fun and it takes thought at the same time. The fact that you can build anything that you want and it works makes it different from anything else.” (Clem Horlander, freshman)

“Building the robot would not have been possible without the power of teamwork.” (John Callahan, junior)

“Robotics is really great. Just like when I was kid and I built Legos, I have no limit to what I want to do except my imagination.” (Patrick Haimbaugh, freshman)

“I learn something new every day. We’re like a family. Practice is something I look forward to after school because it’s just a blast being here.” (Thomas Horlander, senior)

“At first, I felt so out of my element. Now I’m not just building robots…it’s much more than that. I’m building character.” (Donna Riner, junior)

“This is fun because it’s actual experience that you can take to a job in the real world.” (Jacob Pletcher, senior)