Broad Ripple Asset to Be Part of National Trail Use Study

[Editor’s note: Indianapolis has been selected as one of 12 urban locations across the U.S. to pilot trail traffic monitoring stations for an investigation of biking and walking patterns. The study will gather data to help determine how trails and greenways are prioritized in American cities. Indianapolis will have T-MAP counters placed at two trail locations: one at 54th Street and the Monon Trail and another at approximately 7098 Fall Creek Road across the street from the Boy Scout Headquarters. The accompanying article examines current trail use in Broad Ripple.]

Snuggled between the streets and shops that Broad Ripple is known for rests the popular Monon Trail. Once home to a railroad, the Trail now unites Indianapolis and Carmel.

Rippleites, often generalized as offbeat compared to the rest of Indianapolis’ residents, join on the Trail from dawn until dusk. An afternoon walk showcases a community that has more to offer and more in common than many of the surrounding areas give it credit for.

Latoya Hart, a smiley afternoon walker, has been using the Monon for more than ten years. She loves the care trailside homeowners and renters put into their yards, noting the artwork on display south of the bridge crossing Kessler Blvd. Despite the recent violence in the area, she says the only thing that really frightens her are the bugs prowling the Trail for their next meal. 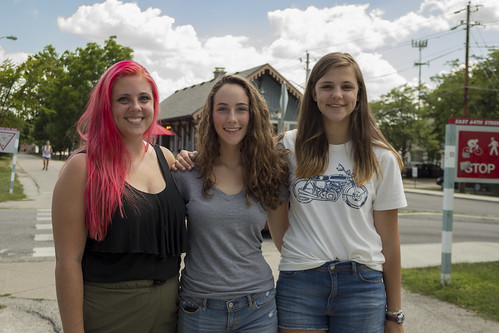 Teens Emily McMath, Molly McMath, and Allie McKenzie have spent many of their summer afternoons strolling and biking up and down Broad Ripple’s stretch of the Monon. All born in Indianapolis, the young ladies have been using the trail their entire lives, from strollers to bikes (and now crossing it in their cars). When school is in session, McKenzie uses the Trail while training with the North Central Cross Country Team. All have a taste for the frosty treats that Brics supplies Trail users on steamy summer days. When asked to recount any crazy Trail stories, all three laughed about nearly being hit by cyclists: “On your left! On your right!” they mimed holding handlebars.

Friends Sadie Bennet and Darren Johnson, first-time users of the Monon, both vouch for its beauty. Bennet, of New Palestine, “has always heard good things about it, like the little ice cream shop.” She added that the Cultural Trail Bikeshare program would be a fantastic addition to the Monon. 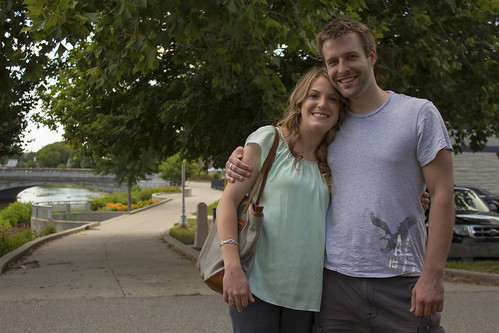 Edi Powell and her husband have lived in Broad Ripple for 30 years and walk the Trail daily. They used to ride their bikes but have parked them because other cyclists were pedaling at too wild a pace. A cyclist once hit Mr. Powell while he was walking. Despite the speeding bikes, the active Powells still enjoy the Trail two, even three, times a day. Mr. and Mrs. Powell consider themselves part of the Monon “morning regulars,” and are delighted to start their day with familiar Village faces.

The Monon not only brings people to Broad Ripple to walk and shop, but it also hosts Rippleites in getting their move-on in an environment that invites interaction, art, and ice cream.

A “Whole” Lot of Controversy