Charlotte Smith Lights Up the Skies 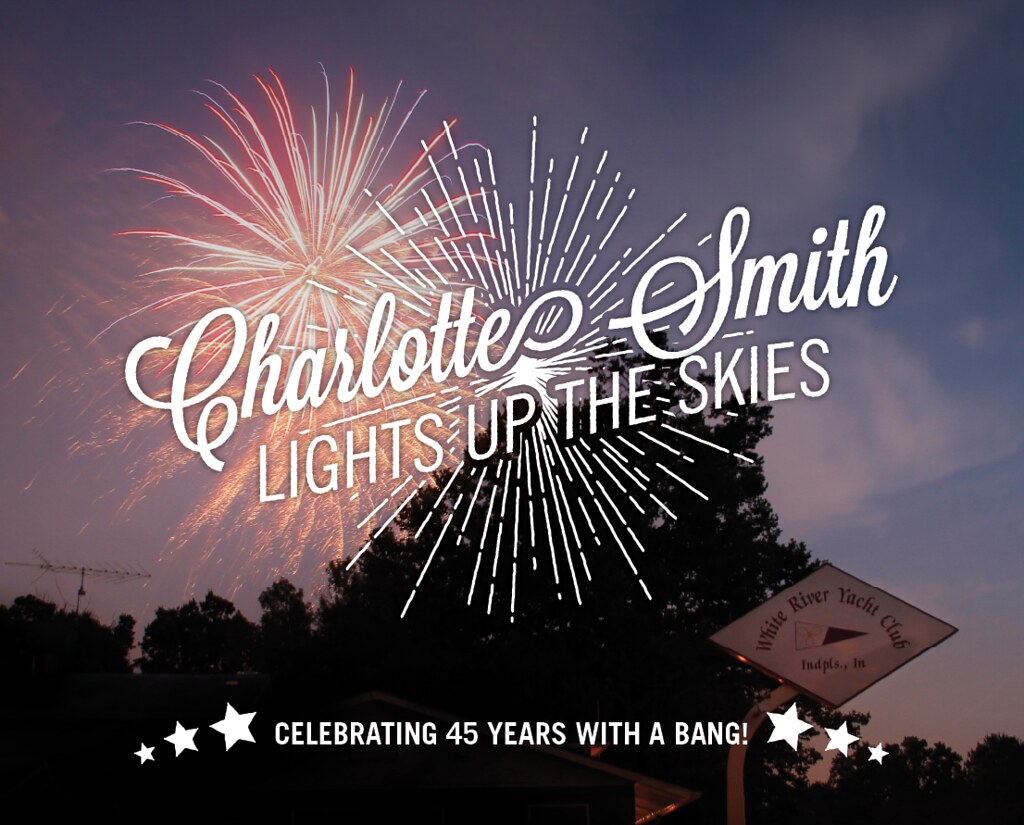 This year marks the 45th anniversary that Charlotte Smith and her family have celebrated Independence Day by putting on a fireworks show along the banks of the White River in Broad Ripple.

Meredith Smith started a fireworks show to give back to the neighborhood where he grew up. “Living in the Ravenswood area, Meredith knew there were some kids who couldn’t afford fireworks nor had the means to go watch a good display, so Meredith wanted to give back,” shares Charlotte, who maintains her husband’s tradition since his passing in 2008.

After Meredith’s passing, his life was celebrated during that year’s fireworks display with the special honor of his ashes being added to the last shot. The last shot is the most anticipated one of the night for the pyrotechnic team. 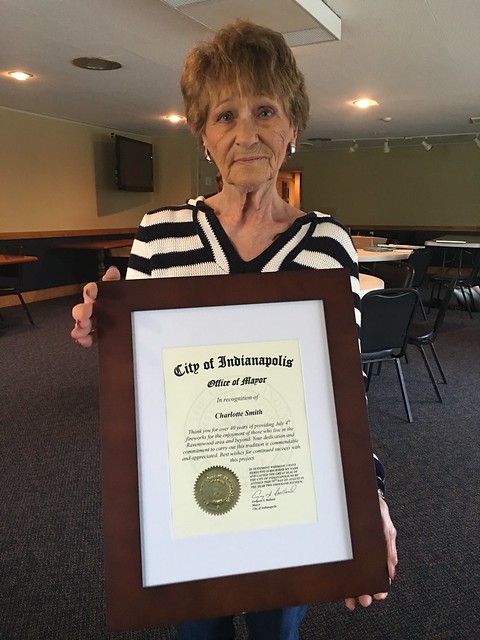 “He passed in February, and we blew him up in July,” says Pam Schmidt, Meredith and Charlotte’s daughter, with a smile. Pam added her father’s ashes to the shell of the last shot that year.

The Meredith Smith Memorial Fireworks is a charitable event, based strictly on donations, and is not a business. Charlotte and her family are very clear that all the money that they receive for the show goes towards the event with none of them making a dime off it.

“This is our philanthropy. It’s an honor to do this for the community and to continue this tradition in my husband’s name,” says Charlotte. “What comes in goes up.”

The organizing of this event is handled by Charlotte and her family including her son and daughter, their spouses and grandchildren along with a team of volunteers. While the event takes place along the White River on Indy Parks property, there is no connection to the White River Yacht Club for the event.

“Our fireworks show is commonly associated with the Yacht Club due to proximity, but we run an independent event not directly involved with the Club. We shoot off City property and handle all of the permits ourselves,” clarifies Charlotte.

Charlotte is required to pay for the permits, park rangers and the code enforcement bills in addition to all of the additional logistical expenses. Each year, the event is directly correlated to the amount of private donations received. In its first year, eight people donated a total of $500. The event has grown larger every year and has since taken on a life of its own.

Meredith was head of maintenance for Washington Township Schools. He stayed on as a consultant during the construction of the new building at Woodfield at the Crossing before formally retiring. Before starting the fireworks display along the river, he began shooting fireworks at the Shadeland drive-in. He embraced this challenge and became quite proficient at large displays.

The spirit of the show is all about Meredith’s original mission to give back to his community. Since his passing, the show along the river is still a family affair honoring Meredith and the neighborhood he loved. Committed to keeping Meredith’s memory alive, it’s Charlotte’s wish that the tradition continues even after she is gone.

At the end of the show the year Meredith passed, an IPD officer asked Charlotte, “Will you do it again next year?”

Charlotte reflected as she looked across the river to the Westfield bridge and saw the faces of the crowd and replied with conviction, “Yes.”

“We earned our right to be free, and we celebrate this,” says Charlotte. “Myself and my kids know that the community appreciates our efforts.” 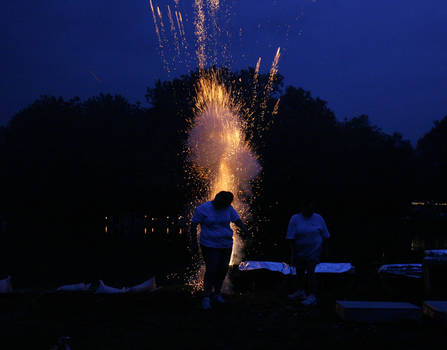 Charlotte’s family are all experienced pyrotechnicians with the necessary certifications. The display is professionally executed and has trended towards more electronic shooting instead of by hand firing. Safety is a priority, and the fire department is always present. The only year Meredith was hurt was during the 1975 show in which he refused to leave for the hospital until the last shot was fired.

The production is professional across the board. Box shots, ground displays, aerial shells, v-shots, racks and special displays are all part of the exhibition. The v-shot was created for Charlotte based on her request for a large visual concept. The designs may be Charlotte’s, but it’s her team that implements them. For instance, Pam creates the cross and flag displays.

“Our goal is not to keep the sky quiet. We have a lot going on both near the ground as well as in the air,” shares Bud of their strategy. “We don’t want everyone’s neck cranked back looking up into the sky, so we vary their gaze.”

“We all work together to formulate the show year after year with new displays and ideas,” shares Bud. “My sister Pam, mom, myself and Phil Ramsey work together to bring to life what mom’s visualizes.” 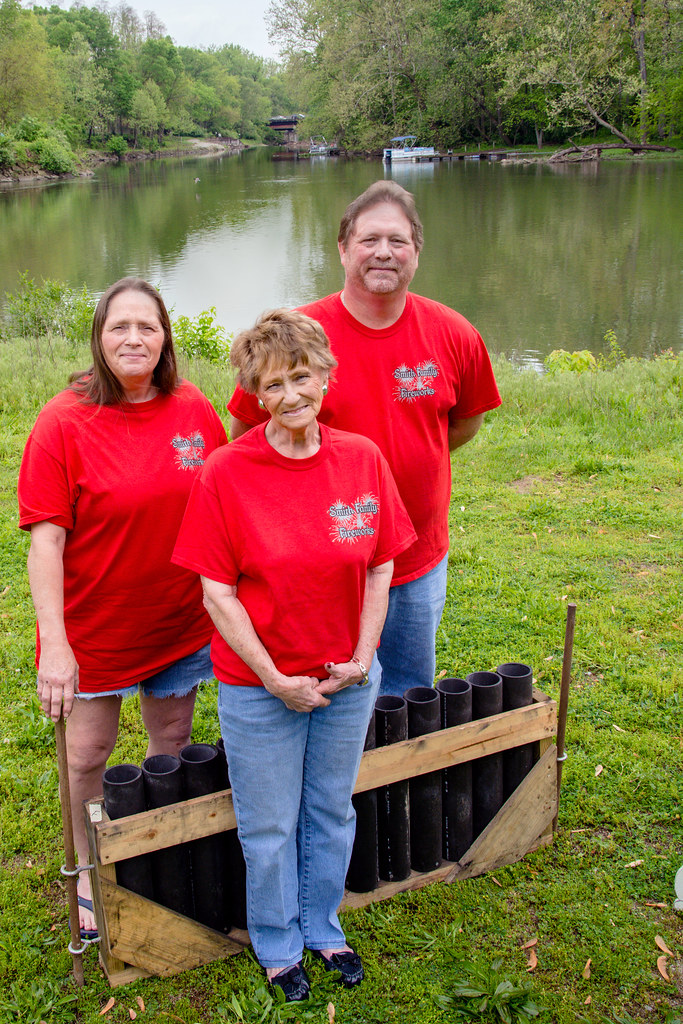 “The Meredith Smith Memorial Fireworks has a lot of notoriety,” says Phil Ramsey, owner of Ramsey Pyrotechnics located outside of Lebanon. “We love working with Charlotte, Bud and Pam. They are experienced pyrotechnicians, and we’ve attended some of the same workshops for operators. My company works with a lot of organizations, and to see a community come together like theirs with that level of support is inspiring.”

“We love Phil’s product and his company,” says Charlotte. “We used to be the best kept secret in Indianapolis,” adds Pam. “I think everyone knows about us now.”

“We take pride in this show. We do the best job we can with the money that is donated and are very grateful for all of the support we receive,” says Charlotte who is also thankful for the volunteer efforts of flier distribution, soliciting donations and helping the day of and the day after the show with prep and clean up.

In 45 years, the show has only been canceled twice due to weather. The year of the drought, thanks to Charlotte’s efforts and approval from the IFD Fire Chief, the show went up. A couple days later, the Glendale Body Shop hung up a banner that read, “Thank you, Charlotte.”

When Meredith passed away, neighbor Jimmy “Mack” McDowell, who lives across the river, created a memorial video to celebrate Meredith’s contribution titled, “Thanks, Meredith, for the Big Bangs.”

The night of the shoot, as soon as the last shot is up, Charlotte starts thinking of how to improve it for the following year. “I find myself constantly critiquing throughout the show and know what I want to do differently next year,” says Charlotte. This year’s celebration promises to be extra special to mark their 45th anniversary.

“It’s an honor for me to continue what my husband started 45 years ago,” says Charlotte, getting choked up. “I was married to that man for 55 years, and it’s such a privilege for me to be able to keep up this tradition to celebrate Meredith.”