Broad Ripple
Home›Indiana›Broad Ripple›Cheers! To a New Year and a New Brewer

Cheers! To a New Year and a New Brewer

Just after celebrating its 24th year in Broad Ripple, the Brew Pub is breaking in a new brewer, Jonathon Mullens. He is replacing John Treeter, a south sider, who has opted for a location closer to home. Both of the men are fun-loving, easy going guys, and even resemble one another with the matching beards. Although, the beard was not a requirement for the gig.

In fact, being a brewer for the Broad Ripple Brew Pub is like joining an exclusive fraternity of beer makers. The prestigious position has been coveted by many brewers who feel that owner John Hill cultivated the brewing culture in Indiana.

Sitting in a pub in Vancouver, where he immigrated after leaving England, John Hill found himself tired of his job as a miner and ready for life’s next adventure. He impulsively hitched a ride with some friends moving to Indianapolis.

“We were seated at the bar when my friends said they were moving to Indianapolis and this was ‘goodbye’ and I asked them if they had room for one more,” recalls Hill. 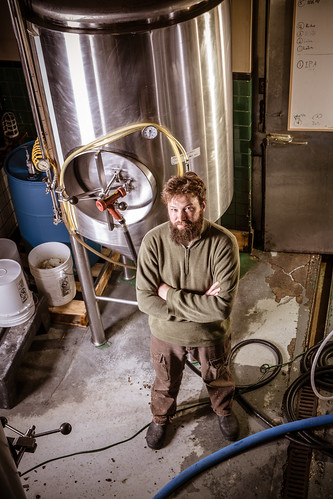 An electrician by trade, Hill soon became a restaurateur. His first venture was opening the Corner Wine Bar. “We were the first sidewalk cafe in Indianapolis,” said Hill. The grand-opening event included a ribbon-cutting ceremony by former Mayor Hudnut.

This would be the first in a long series of “firsts” for Hill. The Broad Ripple Brew Pub was the first brew pub in Indiana, earning Indiana’s first gold medal at the Great American Beer Festival in Denver. The Broad Ripple farmer’s market started in the parking lot of the Brew Pub, and the Brew Pub co-founded the Indiana Microbrew Festival. (Next year’s festival is being moved from Broad Ripple to Military Park, due to its growth.)

After the Corner Wine Bar, Hill longed for a real English pub. Aside from his family, a good, strong bitter beer is what he missed the most after moving across the pond. After figuring out the logistics and necessary supplies, he then converted the Broad Ripple Auto Parts building into his now-famous Brew Pub.

From inception, the English-style Pub was a hit. Seven barrels of beer are brewed fresh each week. The grains are purchased directly from England, which is what gives beer its body and color. An English beer is “low carb” compared to American beers. Initially excited by this statement, only later discovering that “low carb” in regard to beer means “low carbonation”.

All of the beer is made and served on site, there is little to no distribution. “I feel like I am working in a home brewer’s playground,” says Mullens of the back room, called the “brew house”.

The passing of the baton, or the tap, provides a grace period of training for Mullens to learn the inner workings of the brew house and for outgoing Treeter to bid farewell to the Brew Pub. “The emotional attachment that I have to the essence of the Brew Pub is the challenging part,” confides Treeter, who is relocating to the south side to be closer to his family. He adds, “I will miss John Hill.”

Many prior brewers have gone on to do great things, many of the brewing houses around the state got their start at the Brew Pub. It is almost has if Hill has fostered independence as a incubator for small businesses, such as the Speakeasy does with tech startups. Names such as: Brugge, Twenty Tap, Lafayette Brewing Company, People’s Brewing Company, and Flat 12 all got their start in one way or another from the Broad Ripple Brew Pub. There is even a former brewer who now works as a brewer for Miller in Milwaukee.

This puts into perspective the influence of John Hill establishing the roots for craft beer in the state of Indiana. In addition, John Hill founded the Brewers of Indiana Guild, which officially achieved non-for-profit status in 2000. 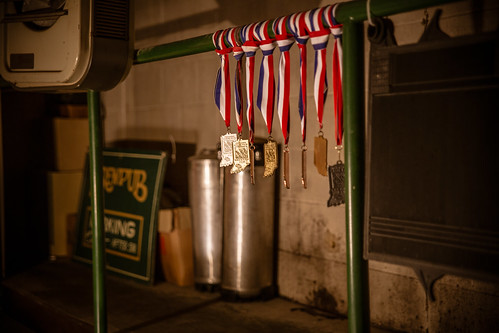 Given the history and evolution of brewing beer in Indiana, Mullens says, “This makes it even more of an honor to have been given the opportunity to brew here at the Broad Ripple Brew Pub.”

Mullens and his family are the ideal types of people that Indianapolis hopes to attract. Mullens is originally from central Illinois, having lived in Colorado and California before Indiana. “My wife and I were looking for a great place to raise our children, and Indianapolis seemed like the best place.” They have lived here for ten years.

With a background in web design, Mullens is a graphic artist who now focuses his creative and artistic talents on the creation of beer.

There are four standard brews made every week, and Mullens says that the ESB (Extra Special Bitter) is the most important, since that is the owner’s favorite. There are typically three other seasonal beers made, varying by month, week or holiday.

Mullens is working on a signature recipe to add to the list, but patrons may have to wait a few months for the introduction. He did offer some hints that it may be a type of American rye, super pale with a hot bite to it. “This may be more of a summer release, and I need to make the recipe solid first,” shares Mullens.

For a full menu and beer descriptions, visit broadripplebrewpub.com.

Brew 101
The brewing process starts inside a mash tin where water is heated to 170 degrees. Grains are then added that will drop the temperature down to around 152 or so. These temperatures will vary from beer to beer but usually hover around those temps. This concoction steeps for 45 minutes to one hour. Then they transfer this mix to the boil kettle where it will boil for an hour while adding hops at various times during the boil. This is where a sugar water, called “wort,” is created and then cooled. The cooling temperature varies for ales or lagers. The fermentation process is next, which is where the yeast is added, creating the alcohol. The process takes about a week to complete. The alcohol content varies by beer, but averages between five to seven percent.