Taylor Ramey remembers the day she scrimmaged the JV. She had the ball, and as she pivoted around a defensive player, she launched a shot from half court. It sailed through the net, and her teammates quickly gathered to cheer her success. Taylor turned toward her coach who motioned for the game to continue. 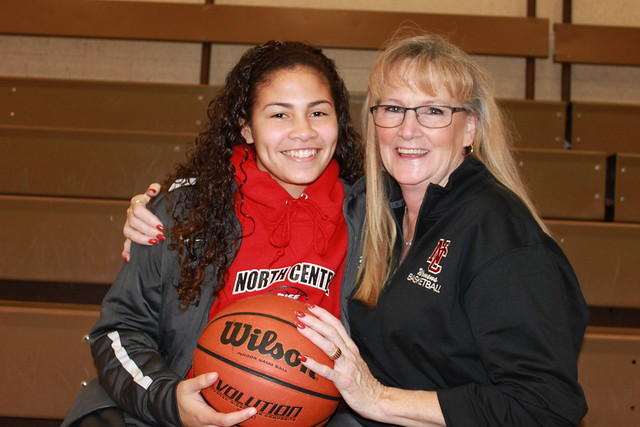 “I think my weakness with her being my daughter is that I don’t compliment her enough,” says head varsity coach of the North Central Lady Panthers DeeAnn Ramey. “But when she’s gotten a hard foul or when I think she’s been hurt, I think the mother in me comes out.”

“She’s protective of us,” says Taylor. “You know when she’s mad when her heal gets to pounding, and you see everybody’s head turn!”

DeeAnn’s coaching career began as a “gym rat.” Her father was a gym teacher and basketball coach, so she spent plenty of time in the school gym. “It’s a great environment to bring kids up in,” says DeeAnn, who competed in the Final Four her sophomore year at Mooresville.

DeeAnn soon followed in her father’s footsteps. After graduating from Marian University, DeeAnn began teaching and coaching, eventually leading the girls’ varsity team in Richmond. In fact, DeeAnn’s father served as assistant coach. “It was a really neat experience for him to do that,” says DeeAnn, whose player—Miss Basketball 1997—is now her assistant coach at North Central. 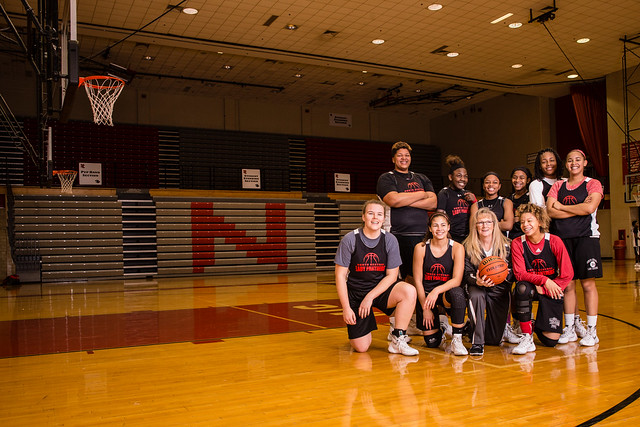 Daughter Taylor soon brought a short respite from coaching but not for long. Like her mother, Taylor grew up in a school gym. “I grew up at North Central, so I feel like I have a whole bunch of brothers and sisters,” she says. Taylor started playing basketball at the age of 3, eventually embracing soccer and playing all the way into high school.

As a freshman, Taylor played on the varsity soccer team and even started several basketball games. This year, Taylor has started every game for the Varsity Lady Panthers. “She is such a talented athlete,” says mom, DeeAnn. “I’m really looking forward to the next two years.”

Taylor eventually hopes to become an athletic trainer or sports journalist. “I just want to be around sports for the rest of my life,” she says.

Although DeeAnn had coached Taylor’s AAU travel team, she hadn’t planned on returning to varsity basketball. For years, DeeAnn has taught physical education at North Central, and when the head girls’ coach retired, DeeAnn thought about Taylor. “I knew my daughter’s group was coming up, and I didn’t want it to go to just anybody,” she says. 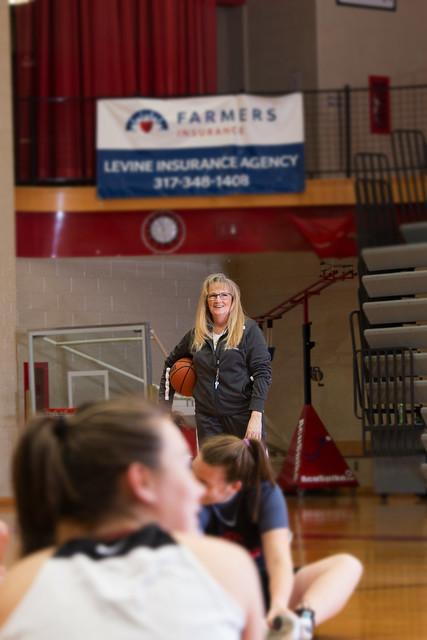 DeeAnn’s first year was a smashing success. The Lady Panthers won the 4A State Championships in 2011, and DeeAnn’s father and daughter celebrated alongside her. This year’s exceptional team may just hold the key for another state win.

“This is a very special team. There’s so much talent, yet they’re so unselfish. They get along on and off the court,” says DeeAnn, who is proud that many of her players maintain a 3.5 GPA.

But mother and daughter dynamics are just as cohesive. “She’s just another player,” says DeeAnn who has the stats to prove why Taylor starts the games as a shooting guard.

“She doesn’t seem like my mother on the court. I’m not given any advantages,” says Taylor who still has her disagreements with the coach. “I may not think she’s always right, but she’s the coach, and I have to listen,” says Taylor.

DeeAnn believes that facing challenges and disappointments, working together and remaining loyal are more important than winning. “I expect [the players] to be good people. Ultimately, you just want them to be successful in life.”

Taylor agrees that winning isn’t what’s important. “If we do what we’re supposed to, I feel like that’s fine because we got better,” she says.

“If they’ve given 100 percent, they’re winning,” says DeeAnn. For her, the greatest part of coaching is watching her ladies working hard, achieving their goals and celebrating together. 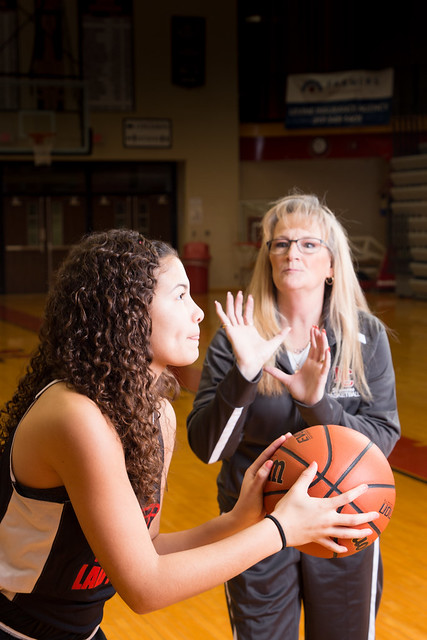 And when practice is over and they’re off the court, DeeAnn isn’t the coach anymore. “She treats me like her daughter when we get home,” says Taylor. On the way out from practice, the conversation is less about missed points and failed plays; DeeAnn is asking Taylor about who she’s texting while Taylor is asking DeeAnn what they’re having for dinner.

For Taylor, the greatest perk of having her mother as coach is gym access. Even on days off, Taylor convinces DeeAnn to take her to the gym for extra shooting drills. With youth leagues, games and practices, mother and daughter are often at the gym until after 9 p.m. “We’re supporting the kids, so we’re here all the time. We probably just need to build a room here,” says DeeAnn.

The greatest part of having her daughter on the team is sharing the memories. “We’ll have those memories for the rest of our lives,” says DeeAnn, recalling the State Championship in 2011 and how her daughter was by her side. “We’re hoping that we get one together,” she says.

“Right,” agrees Taylor. And if anyone has a problem with her coach — her mom — Taylor says, “I’ve got her back no matter what.”

A Noble Order Comes to Zionsville