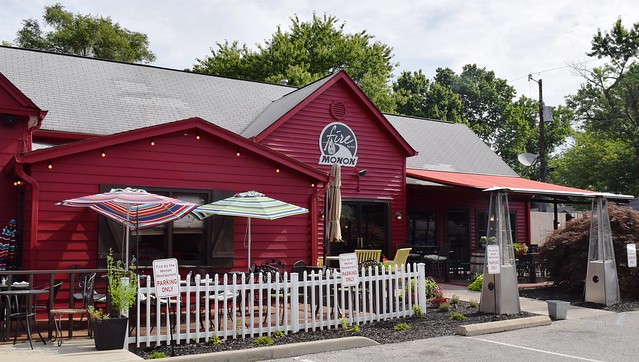 Located in a bright red converted house in Broad Ripple, Fire by the Monon has a casual vibe and offers a menu full of outstanding attention-getting food.

I’m glad my friends convinced me to give the place another chance. It was several years since I dined there. That was before current owner Joe Cominsky introduced some new menu items and tweaked some of the other recipes. My prior opinion of mediocre has changed to being wowed.

Smoky nuggets of the house-smoked pulled pork are combined with pasta and cheeses in the Dirty Mac and Cheese. Rotini pasta is used, and it’s perfect for catching the rich, velvety, cheesy sauce, a combination of white and yellow cheddar, smoked Gouda and Monterey Jack. It’s filling enough to be an entrée. 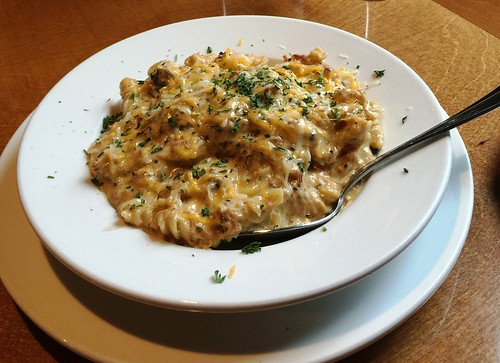 My husband told his friend Greg that I was working on a review for Fire by the Monon. Greg just dined there and asked if I tried the Dirty Mac. He said it was some of the best mac and cheese he’s ever had – I agree.

A half-pound Angus beef steak is the base for the Inferno Burger. The perfectly grilled burger is topped with house-smoked shreds of pulled pork (the same pork that’s in the Dirty Mac), two big fat beer-battered onion rings and then chipotle-citrus BBQ sauce drizzled on top.

Thinking the Inferno Burger would be way too hot for me, I was apprehensive about trying it, but there was just the right amount of kick from the combination of the ingredients used in the rub on the pork. The cayenne in the rub gives some back heat while the brown sugar sweetens. The burger is served with French fries and a fire sauce made from sour cream, honey and chipotle – yum.

I love Reubens, and I love grouper, so I had high expectations for the Greuben. I was not disappointed. Upland Brewing Company’s Champaign Velvet Pilsner is used in the batter and made for a delicately crisp texture after the grouper was flash-fried. Just like the familiar Reuben, it’s served on grilled marble rye bread with melted Swiss cheese. In place of sauerkraut which would be too overpowering for the grouper, there is a crunchy red cabbage slaw prepared with Russian dressing.

One of the recipes Joe introduced is the Chipotle Agave Salmon. The smokiness of the chipotle and sweetness of the agave in the chipotle-agave glaze beautifully highlighted the tender, sweet and fresh tasting mesquite-smoked Atlantic salmon. After the salmon is grilled, a roasted poblano crema is drizzled on top. The salmon is served on top of basmati rice which is laced with a medley of roasted corn, poblano peppers and black beans along with several spears of tender grilled asparagus. 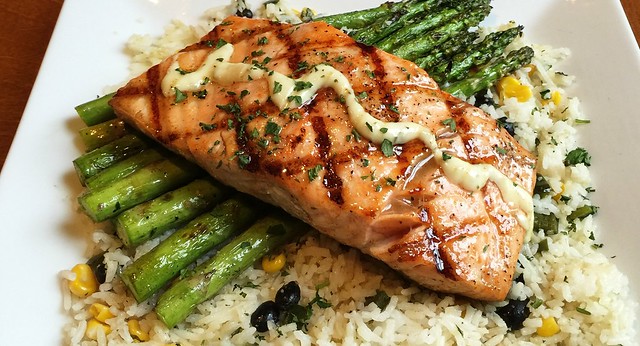 Sometimes simpler is better, and in the case of the Warm Georgia Peach Bread Pudding, simpler is over the top crazy good. There aren’t any nuts or raisins to detract from the soft texture of the chunks of brioche bread which are slightly crusty on the outside. Slices of fresh Georgia peaches from Johnny’s Market are swimming in the caramel whiskey sauce made with Maker’s Mark 46.

It’s then topped with a big scoop of vanilla bean ice cream which creates a luscious cream as it slowly melts over the warm bread pudding. The owner Joe and his wife Patricia are big fans of bread pudding and try it whenever they see it on a menu. Once after having a particularly good bread pudding, Patricia said, “I’ll bet this would be even better if they made it with fresh peaches.”

The rest is delicious history!

John Mellencamp is Rocking His Best Yet

Angie Trusty is the creator of the food blog whiteriverkitchen.com, a realtor, mother of three girls and enjoys living on the White River with her husband.