Going All The Way Back

After many years of exile, I was lured back to Indianapolis in 1987 by Ophelia Roop, the colorful events planner back then for the Central Library. She assured me it was “safe” to return now that 17 years had soothed angry reactions to my novel “Going All The Way” – and the once-controversial work was read and discussed in book clubs at the library. (Kurt Vonnegut had predicted in his review of the novel in Life magazine that “Having written this book, Dan Wakefield will never be able to go back to Indianapolis – he will have to watch the 500-mile race on television.”)

Having a great time on that return and meeting old friends, I came back a year later when a New York publisher issued a new edition of the novel. [I still had no idea back then that I would ever come back to actually live here, as I did in 2011.] I was interviewed by Will Higgins, the young editor then of an alternative publication called “The New Times,” a kind of pre-cursor to “Nuvo.” In the course of the interview, Will proposed that we plan a “Going All The Way” Bus Tour, stopping at some of the sites I wrote about in the book, like The Red Key Tavern, The John Herron Art Institute and Crown Hill Cemetery (where the young anti-heroes of the book go to muse on their future.)

Now a star reporter of The Indianapolis Star, Will recalled, “You and I met over breakfast at the old Stouffers Hotel on the top floor of their dining room. The idea of the tour hit me then and there, and I blurted it out and you liked the idea. The rest is history.”

Thanks to Will Higgins, history repeated itself last November when he revived the idea of the Bus Tour, organized the whole thing, announced it in The Star and had enough responses the next day to fill the 48 seats on the bus (plus a waiting list).

When the first tour was held in 1988, my lifelong friend Ted Steeg, the former Shortridge and Wabash football star who served as the “model” for the character Gunner Casselman in “Going All The Way,” came down from New York to join me on the tour. The two of us passed the mic back and forth as we joked, reminisced and shared memories of high school days and “Indy in the ’50s” when the action of the novel took place.

The irreplaceable “Gunner” died last year, and I wondered if I could bring off a running commentary by myself. I knew it wouldn’t be the same, but I had the support of Will Higgins as co-host, and I enlisted the aid of friends who read appropriate passages from the book as we stopped or slowed. Travis diNicola, founder and director of IndyReadsBooks; Karen Kovacik, IUPUI professor and former Poet Laureate of Indiana; and Judy O’Bannon, widow of the former governor, were eloquent in their readings when we stopped at some of the featured sights.

As we had before, we began and ended the tour at the legendary Red Key Tavern, where Sonny and Gunner meet up in the novel. This time, we added a stop in front of the house I grew up in at 6129 Winthrop where I sat on the roof of the porch and looked for enemy airplanes as a “Junior Air Raid Warden” on The Home Front in WWII, just like the character Artie in my novel “Under The Apple Tree.” 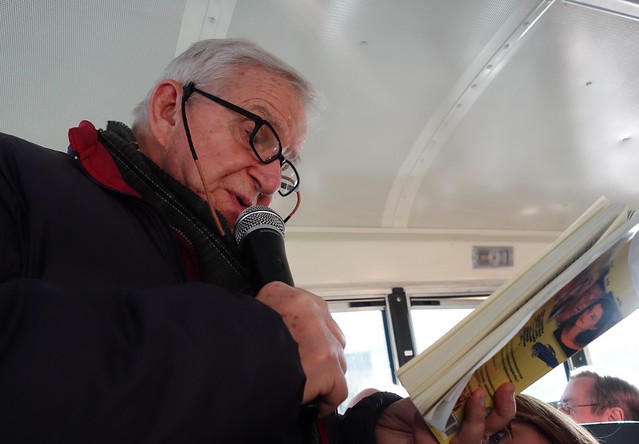 From there, we went down Meridian Street and stopped at Shortridge High School. We went inside to the first floor hallway where Judy O’Bannon, another Bus Tour traveler, the Pulitzer Prize photographer Bill Foley, and I have our plaques on the wall of The Shortridge Hall of Fame (along with Kurt Vonnegut and my classmates from the Class of 1950, Indianapolis Indians President Max Schumacher and Senator Richard Lugar (he and I wrote sports columns for the “Shortridge Daily Echo.”) )

We stopped outside the former Herron Art Institute which is now one of the leading high schools in the state, and Karen Kovacik read the passage in “Going All The Way” when Sonny and Gunner go there in hopes of expanding their minds by “looking at art” and trying to figure out the appropriate comments, stances and length of time spent at each painting to appear to be aficionados. Instead, they spot an attractive young woman who they find is far easier to appreciate.

Will directed our bus to The Riviera Club which was one of the havens of summer for neighborhood kids in Broad Ripple when I was growing up, and we got out to stand by the November-empty pool with a gracious host from The Club. I read a passage of the novel when Gunner recalls a dark memory from high school of him and his friends being turned away because one of the boys with them was Jewish (based on an incident with me and some of my Shortridge friends back in the ’40s).

Such an incident couldn’t happen now in the Club that identifies itself as “a place for everyone, a truly inclusive and unique club representative of the many diverse neighborhoods and individuals around us. Today the Riviera Club is a welcoming family-friendly environment for people of any background.” Some things do change for the better.

Our intrepid driver took us next to the top of Crown Hill Cemetery which still affords the best view of the city. It was there that Sonny and Gunner went to contemplate their future by the statue of James Whitcomb Riley, “The Hoosier Poet.” 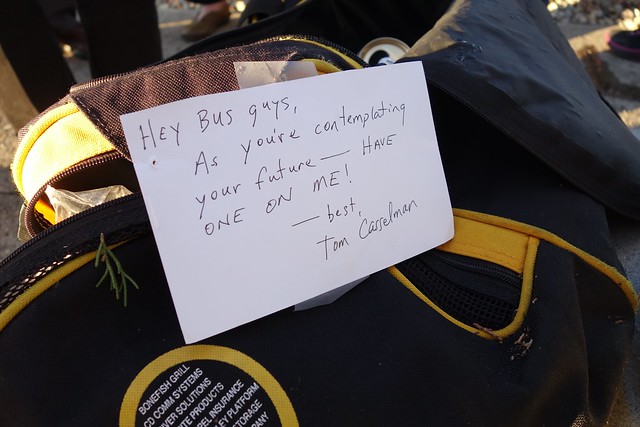 Everyone got off the bus to stretch and enjoy the view when a cache of beer, soda and mineral water was found with a note attached that said , “Hey, Bus Guys – As you’re contemplating your future, have one on me! – best, Tom Cassleman.”

“Tom Casselman” was the name of the fictional character known as Gunner in the novel. Now it can be revealed that the drinks and the note had been cleverly stashed there beforehand by tour organizer Higgins.

For the sake of historical accuracy, I explained when we got back on the bus that Crown Hill was not only visited by high school kids who went to the top to exchange deep thoughts, but also by those who found its darkened, winding pathways good places to “park” at night with a date and not be interrupted by the intrusive beams of prowling police.

Back at The Red Key, we told more stories, renewed acquaintance with old friends and made new ones, played old favorites on the legendary jukebox (surely no other jukebox in town or maybe in the whole country has Benny Berrigan’s classic 1939 recording of “I Can’t Get Started”) and ordered the famous Red Key burgers with Dolly’s homemade potato salad.

I thought of the words of poet William Herschell (often erroneously attributed to James Whitcomb Riley), “Ain’t God good to Indiana? Ain’t he, fellers? Ain’t he though?” That epic verse hung on the wall of the old Broad Ripple Branch Public Library, attached to School #80 (now a condo), where I learned to read.