Ask people to describe Broad Ripple and you’ll probably hear some variation of “It has everything!” Until now, however, the village was missing a key component—a hotel. You can now check off that box. In May, the doors opened at Hotel Broad Ripple, 6520 Westfield Boulevard. 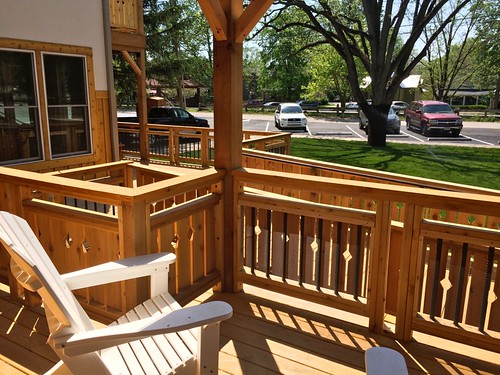 Nestled against the Monon Trail, the boutique hotel offers nine guest rooms, each uniquely decorated with the discerning eye of hotel owner and operator Debbie Hasbrook. “I’m very happy with the way it’s turned out. We’ve had tremendous response…very positive,” Hasbrook said, noting that the rehab project has been two years in the making.

Broad Ripple old-timers will recognize the two former private residences along Westfield that Hasbrook and project builder Josh Frost connected using a combination of new design and construction with some original features of each structure. “I’ve renovated older residences for 15 years, so it becomes easier to walk in and see what it can become,” explained Hasbrook. “I’ve taken some nasty, old houses and made them look better and turned them around [for resale].”

In the ’60s, the two houses became business locations: Merrill Stage, which built stages for schools and theaters, including Clowes Hall; and Paymaster, a payroll check vendor. At one point a candy shop was located there. During construction, workers found a Hershey’s chocolate powder can, a couple of century-old mustard jars, and a few liquor bottles. 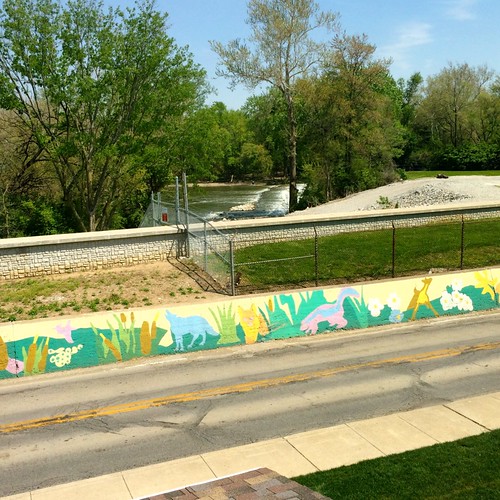 The site also boasts a notable bit of history. Perhaps apocryphal, the story is that famed Hoosier poet James Whitcomb Riley penned a poem in one of the upstairs rooms while looking out a window at nearby White River. To Hasbrook’s knowledge, the poet’s spirit is not present. The great river view, however, remains.

When asked how smoothly the project progressed, Frost and Hasbrook laughed knowingly, recalling the job of blending the old with the new. “The challenges were enormous. Just think about getting the floors at the same level—how do you make that work?” Hasbrook asked. “You just go in and do it,” added Frost. “I love it. Take something that’s falling down and make it useful. It will be here a long time after I’m gone.”

Hasbrook said she looked at several other sites, including near Butler University, but settled on the Monon location—something she said is clearly the hotel’s greatest asset. “I was running one day on the trail and looked at the houses and wondered if we could connect them.” She added that the two property owners were wonderfully patient during the purchase transactions, given the needed zoning changes. “I think they are happy we didn’t tear their buildings down, and that we fixed them up,” said Hasbrook. “It’s nice—it all feels pretty good at this point.”

Also on the list of hotel assets is easy access to great restaurants and shopping, and ample, free parking for hotel patrons. “You can leave your car all weekend and never have to use it,” said Hasbrook. 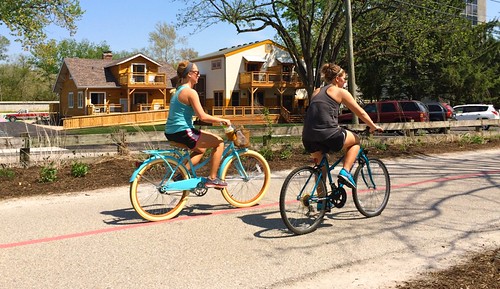 Room rates range from $160 to $275 a night, with a continental breakfast included. Afternoons and evenings, a lounge and bar area will be open to the public, allowing Monon Trail users and others to stop in for refreshments. A kitchen is located in the lower level, but Hasbrook says she’ll limit food offerings to hors d’oeuvres. “I have no interest in being in the food business.”

The word is out about Hotel Broad Ripple thanks to word-of-mouth exposure, and folks who occasionally stop in to take a look around. Others have called to thank Hasbrook for doing the hotel. “I’m often asked, ‘What’s the hotel’s theme?’ It’s comfort. I want people to walk in here and feel totally comfortable,” said the owner.

Most guest rooms have splendid views of the Monon Trail, and Hasbrook is planning a nearby outdoor seating area offering beer, wine and hors d’oeuvres. “On weekends the Monon is just alive—it’s full of energy.” Hasbrook confesses to a weakness for older parts of the city, seeing possibilities, not problems. “I think Broad Ripple is the best because it hasn’t been created; it has evolved. It’s a mix of all kinds of people, all ages, and it’s real, and it’s just full of life.”