Dorothy Evans Kandrac is living proof that you are never too old to figure out what you want to do with your life. At the age of 80, Kandrac took a painting class and has become a popular Hoosier painter over the last nearly two decades.

Kandrac grew up on a family farm in Montgomery County. She was born on her family’s homestead. The Evans family settled in Indiana in 1823. Dorothy belongs to the Indiana Pioneers and is a proud member of DAR: Daughters of the American Revolution. Growing up, Dorothy participated in 4H, showing calves alongside her brothers at the county and State Fair. She grew up with all boys as the only girl in her generation of cousins.

“It has been my experience with people who grew up on a farm that they have a different work ethic. It’s part of their life,” she said.

Graduating from Indiana State University in 1940, Dorothy earned her teacher’s license and insurance license. While she was teaching, she would create art with her students. “We always had artwork and hand crafts hanging from the ceiling in my classroom when I taught,” recalls Dorothy. “I recall always being interested in creative projects as a child.”

One weekend, a former college roommate came to visit. This was during WWII. The roommate was Margaret O’Neal whose father was the Chief of Police for Indianapolis at that time. The two ladies went to the Claypool bar downtown for a drink. Some GIs were flirting with them from the bar. Dorothy and Margaret were talking among themselves as to which man they found particularly attractive. Dorothy says, “I said, ‘I like that one,’ and he was Michael Kandrac, the man I would marry.”

Michael and Dorothy would marry in 1944, then Michael was deployed to a POW Camp in Linz, Austria. Michael was first generation American and spoke fluent Slavic. After his service, the couple stayed in Indianapolis where they raised their three children.

After teaching for 26 years, she joined her husband in their insurance agency. “I just received a commission check last week for a policy I wrote almost 30 years ago,” shares Dorothy.

It wasn’t until Dorothy retired that she began to paint. She took a class at the Indianapolis Art Center and loved it. 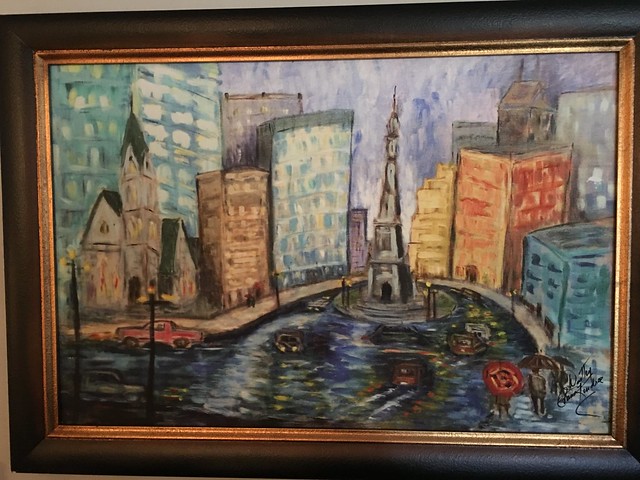 “You don’t have to travel to paint. We have beautiful opportunities right here,” says Dorothy, speaking of her specialty of featuring Indianapolis and Indiana landscapes in her art.

While most of her work is painted from a photo she has taken, she did paint one En-plein-air of the West Baden resort in French Lick.

One of the art projects Dorothy taught her students early on in her teaching career were 3D stars. These stars were structural in nature with the detailed folding involved in their form. A thread of creativity and interest in architecture is clearly present in her art today.

“I love teaching kids art,” says Dorothy. “When I was younger, I wanted to be an interior designer, but at the time, it was hard to make a living doing that. My parents advised me to get a teaching license, so I would always have a way to make a living.”

Dorothy’s paintings, prints, giclees and greeting cards are for sale around the city, including the Indiana Historical Society gift shop, the Indiana State Museum gift shop, The Blue Door in Broad Ripple, Sullivan’s Hardware on Keystone and The Empty Vase to name a few. One of her most popular was her first painting she titled, “Indy in Red.”

“If I were to live to be in my 90s, I would want to have Dorothy’s mind which is still quick and witty, yet has the wisdom of her age in knowing what the important things are. I would want to have her talent and vision to see the world around her as an artist does. But mostly, I would want to have her heart that loves and sees God in all life. Dorothy simply brings out the best in everyone and everything she touches. I am so proud to call her friend,” says fellow DAR member and friend Brigitt Caito.

“You’re never too old to be creative,” says Dorothy Kandrac. “I challenge my contemporaries to use their time and talent.”