More Than Just Any Bulldog 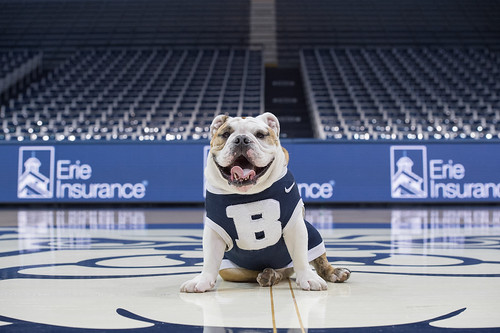 It’s a random Monday morning, and Butler Blue III—known as Trip to Butler students and his 12,800 Twitter followers—is sitting in the basement of Jordan Hall at Butler University with nothing to do.

So he’s doing what dogs usually do: sleep.

After all, Trip is frequently the face of the university, and he knows it.

“Trip gets that he’s a pretty special dog,” Michael Kaltenmark, Trip’s caretaker, said. “He’s a show-off. He hams it up for people.”

Trip is short for “triple;” he’s the third member of Butler University’s live mascot program. Blue I, the original bulldog, served from 2000-2004.

Kaltenmark, a 2002 Butler graduate, took over as director of the live mascot program when he became the caretaker of Blue II, who officially took over as Butler’s mascot on May 20, 2004.

“It’s a dream job for me,” he said. “It’s a lot of fun. No day is like another, it really makes work seem not like work at all.”

One of the busiest parts of Kaltenmark’s job is handling social media. Blue II has 13,500 Twitter followers, while Trip is quickly catching up.

Trip, of course, is limited in his tweeting capabilities due to a lack of thumbs. Thus, Kaltenmark had to learn to think like a canine.

“Who knew I would be good at speaking like a dog and speaking on his behalf?” Kaltenmark said.

Trip comes to the “office” every day with Kaltenmark. That is, when he isn’t busy with a television gig or other social event. If there is a prominent event on Butler’s campus, Trip is likely there.

Football games? For sure.

Basketball games? Always. Trip leads the team out onto the court, racing for that bone awaiting him on the other side of the court.

He even went to visit former Butler basketball head coach Brad Stevens in Boston this summer.

For the man on the end of the leash, maintaining a social media presence and a mascot’s social calendar is a never-ending job.

“You get opportunities at all hours,” Kaltenmark said. “You really want to seize those moments. I think it’s something other institutions wish they had and it’s unique to Butler, I guess it’s a feather in our cap.”

Trip was a protégé under Blue II, but has always been a performer.

“He had Blue II around,” Kaltenmark said. “He learned from him, but he also knew Blue II was in charge, so that meant Trip could play the role of class clown.”

“Blue II liked to be seen. Blue III likes to interact. He likes to be the life of the party,” Kaltenmark said.

When Blue II retired in May 2013 and passed away four months later, Trip was forced into the lead role. Despite his youth—he is only 2½ and has what Kaltenmark calls a lot of “puppy energy”—he stepped up.

“It was interesting when you took Blue II out of the picture, Trip would rise to the occasion. He wouldn’t play the role of class clown,” Kaltenmark said.

While Trip steals the show at Butler, he has a different demeanor at the Kaltenmark’s home in Brownsburg.

“As soon as we get home, he’s looking for the couch and he’s done,” Kaltenmark said. “He’s really docile at home. We have a 3-year old son, and he and Trip are like littermates. My son crawls on him and he’s fine with it. They really coexist well.”

As for whether Kaltenmark will continue to be owner of Butler’s next bulldog, whenever that time may come, he is taking it “one dog at a time.”

“I’ll have to weigh all the options and consider it,” he said. “I really do love it, but the mascot program, while I could spend 40 hours per week on it, is just one part of my job. I’m a university spokesperson, I do community relations, social media, public relations. I have other responsibilities. So that’s challenging.”

In the meantime, Kaltenmark will have his hands full with Trip. And he will love every minute of it.

“You get an awesome dog for a pet,” he said. “Blue II was a part of our family, as is Blue III. You get the sense with Blue III of a special bond and mutual love. They call it man’s best friend, and that’s so true. I get to bring my buddy to work every day.”

Pink Fashion for a Passion