Since King was a child, he had an acute aesthetic for style. In high school, King’s nickname was “pinky” because he frequently wore pink turtlenecks. An avid sketch artist, King was constantly drawing designs on paper during class. After high school, King attended Herron School of Art and Indiana University.

“Around that time, my father used to get mailers from a Hong Kong company that traveled around the country selling clothing,” shares King. “I took my sketch of a suit for myself, and these people made it.”

A relationship developed with the fabric importer of this company, and King carried samples of the suit fabrics with him to sell. He sold a few suits, and as the momentum gained, King was soon making clothing for people. At the time, King was a buyer for the William H. Block Company for men’s sportswear and accessories. 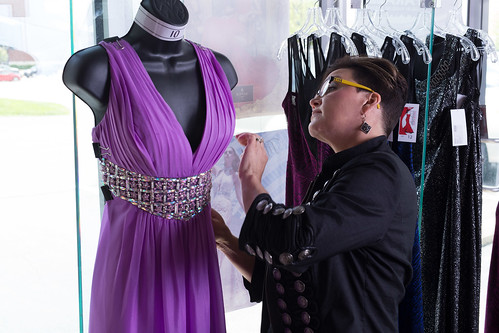 King met Harry Oliver, a renowned local tailor. After working with Oliver for 10 years, King went out on his own. This was 30 years ago. King’s Image opened in the basement of the Glendale Mall, alongside new jeweler Gary Hofmeister.
“Steve eventually followed my lead by building his own building,” shares Hofmeister.

King’s Image has been in its current location in Castleton for the last 15 years, and the business has evolved but still remains true to its roots. In addition to custom-tailored suits, King’s Image has an event area and has expanded to include Stephen’s Prom and Beyond.

King’s wife, Melonee, runs the ladies’ side of the business.

Stephen’s Prom and Beyond is busy from January through May, outfitting much of the northeast side of Indianapolis for special events. “This is a hugely busy time for us,” shares Mel. Starting in 2007, the prom business has grown exponentially since inception. They started with 80 dresses from one designer, and now they carry 48 lines, stocking over 1,500 dresses this season. Their price points are reasonable and below what people may think.

“We understand that this is a really important time in their lives and are so excited for them,” shares Mel, who trains all of their workers to provide the utmost in personal customer service. “It’s so exciting for a mom and a daughter to come in to select a dress, and we make sure that experience exceeds expectations.”

Melonee is a graphic designer and commercial interior decorator, although she does some residential. A Herron Art School graduate, Melonee has called Indianapolis home since studying here.

“I’m a tool time girl,” says Mel, who physically does a lot of the remodeling on her jobs during the months when she’s not busy with prom season. Mel is particularly known for her restaurant design, including Capri, Matteo’s and Sangiovese.

Just over 20 years ago, Stephen brought on partner Jordan Steigman who will take over ownership in a few years. “Jordan is a consummate professional and a marvelous tailor,” states King. “He and his wife, Sue, are tremendous assets to the business.”

King’s clientele over the years encompass a Who’s Who of personalities around the city. Creating suits is still what King is best known for and what keeps his customers coming back.

The Forum at the Crossing