Life on The River: Reflections by Linda Williams

Little did I know as a 19-year-old that I would fall in love with the White River. In 1980, I was fortunate enough to be chosen as the “WNAP Raft Race Queen.” The annual event brought thousands of people to Broad Ripple for a day of crazy homebuilt rafts, floating, fun and music on the river. 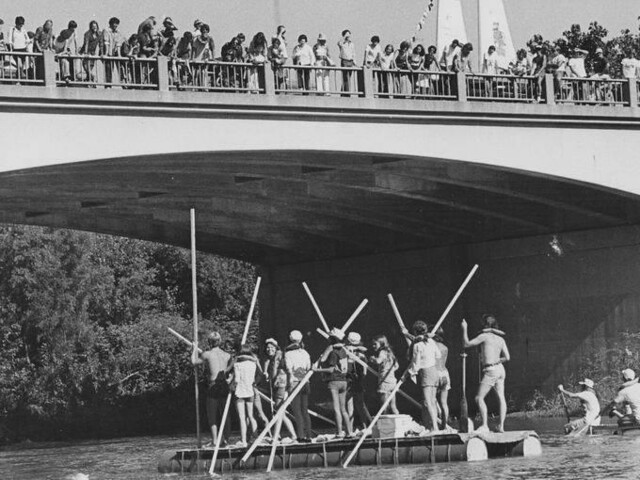 In its heyday, the Raft Race drew 100,000 people to the banks of the White River. It was love at first sight for me. Riding on the back of a speedboat with Tom Cochran and Cris Connor, I couldn’t believe how many houses were along the banks. I thought, “What a cool place to live. It’s just like being on vacation.”

Ironically, six years later when engaged to my now husband Kevin, I would have another encounter with the White River. My husband is a car enthusiast and had purchased a Porsche that happened to be located off of Westfield Boulevard.

The seller invited us in for a beer on his deck, and there it was, the White River again! Speed boats zoomed by pulling skiers, pontoons were filled with both families and partiers, fishing boats trolled by, and I was struck again by that feeling of being on vacation, right here in the middle of Indianapolis.

It just so happened that a house three doors north of the Porsche owner was for sale. It wasn’t any house; it was the home of the late “Moose Munger,” a legendary outdoorsman. His aged widow was about to move into her daughter’s home, and the family had put the cottage up for sale.

After a quick showing, we made a full price offer. Unfortunately, the home was in terrible condition, and the inspector said in front of the owner and her realtor, “This is a candidate for a wrecking ball!” We amended the offer based on the report and closed within a few days.

After our wedding in September, we went through a major structural remodel just to make the house livable and safe. Improvements were made to the riverfront, an old seawall was repaired, decks were improved and landscaping was added. The dilapidated house became our newlywed home.

We immersed ourselves in the river culture with a speed boat, canoe and a membership in the White River Yacht Club. It was there that we gained some lifelong friends and found a fun community of people who enjoy river life 365 days a year.

Our biggest surprise was the massive fireworks display put on by the Charlotte and Meredith Smith family every July 3. It was reminiscent of the WNAP Raft Race with the large number of boats and people who came down to the river to watch. What a PARTY! In 1990, the housing market was booming, and our little River Cottage was appraised for a much larger amount than we ever dreamed. By that time, I had opened our family business, Studio 2000 Salon & Day Spa on Monument Circle, and Kevin was working in marketing at Browning Day Mullins Deardorf Architects. We enlisted the help of partner Greg Jacoby who also lives in the area to draw up a major remodel and expansion to make it our dream home.

Permits were pulled and variances granted, and the project took off. After the major flood of New Year’s Eve 1991, we demolished 75 percent of the home in the spring, and with the help of friends and a very capable contractor, our dream home rose out of the footprint of our little cottage.

We enjoyed the home as our family expanded to add twin boys in 1997 and another remodel in 2008. It was at that time, the new kitchen was featured in Indianapolis Home Magazine as a Design Gold Award Winner, and it also received an International Interior Design Association residential award. We’ve also been twice featured on the “Taste of White River” home tour.

Our home’s location on the White River, the close proximity to the Monon Trail and Broad Ripple Village and the easy access to our downtown business has made this the ideal location in Indianapolis to put down roots, have fun and raise a family. We love living on the river!

Book Launch for “From Rifles to Roses: ...