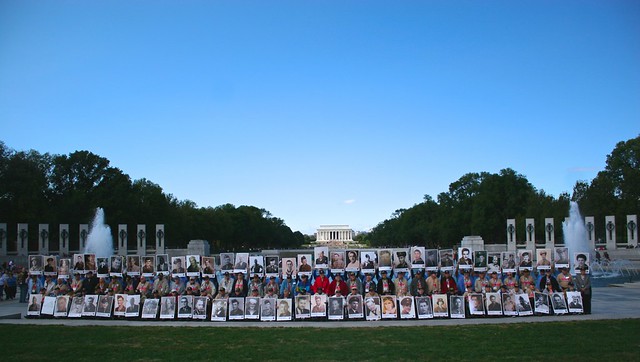 Every Honor Flight is amazing, and the October 18 flight was unique in that of the 70 guardians, 58 were Indianapolis Fire Department personnel. The idea was pitched by IFD firefighter David Harman who went on an Honor Flight last April as a Guardian. He loved the experience and discovered when he volunteered at a Burn Camp for Kids that other major city fire departments provide guardians regularly for Honor Flights. The response from IFD was overwhelmingly positive.

An Honor Flight is a special day trip for World War II, Korean War and Vietnam veterans to visit their monuments in our nation’s capital. The veterans are also driven by the Pentagon, Air Force Monument, the Marines statue from Iwo Jima and taken to Arlington Cemetery to watch the changing of the guard at the Tomb of the Unknown Soldier. Not only were the Guardians from IFD, many of the WWII veterans on the flight are retired from IFD.

The evening before the trip, the veterans and their guardians have a meet and greet where they are treated to dinner while being entertained by a band playing music from the 1940s. The coordinator for the Honor Flight addresses the crowd with the basics for the traveling, and some special guests were on hand to offer their gratitude for their service. IFD Chief Ernest Malone shook hands with the veterans and announced that with all the strong hand shakes around the room that “the department was hiring.”

“I am thankful for events like this that in some small way show you our gratitude,” said Malone.

State Sen. Mike Delph of Carmel echoed Malone’s sentiment, thanking the veterans for their amazing service to our country. 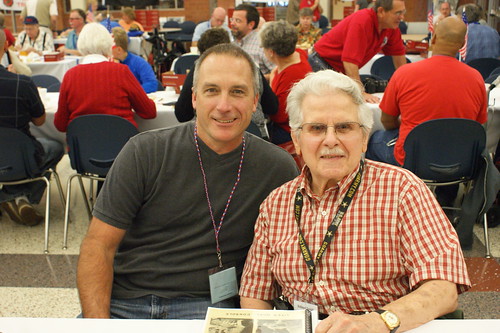 Retired IFD Deputy Chief and WWII veteran Don Bollinger dropped out of Arsenal Tech High School to join the Army at age 17. He passed the stringent physical; however, during boot camp at Fort Grant in Illinois, he collapsed mid-way through a 10 mile hike.

“I woke up in the infirmary and was told I had a hole in my heart,” said Bollinger. “So I received an honorable discharge.”

Bollinger went home and got a second medical opinion. He had a heart murmur, not an actual “hole” in his heart. Assured that he wasn’t dying, Bollinger forged a plan to head out west to California. He saw an ad in the Indianapolis News that a ‘42 Pontiac Club Coupe needed to be driven to Huntington Park, Calif. Bollinger forged a document to show that he was older than he really was and drove out to California. Once he arrived, he got a job as a fry cook at an open-all-night greasy spoon called Frank’s Restaurant.

One night, Bollinger served a group of Merchant Marines who told him they needed men desperately. There were ships waiting in the harbor loaded with supplies for the war effort and no crew since the draft was taking every able-bodied man.

Bollinger may have omitted certain details from his medical form, and the physical was far less detailed than the Army experience. In April of 1943, Bollinger became a Merchant Marine.

Bollinger took a total of five deployments with the Merchant Marines. Four of those were to the Pacific Ocean theater, and one was to Liverpool, England, delivering fuel and supplies.

When the end of the war was announced, Bollinger was serving on a tanker. They were anchored in the harbor at Ulithi in the Caroline Islands on Aug. 14, 1945. He arrived back to the U.S. on Sept. 28, docking in New York City.

“It’s a day I will never forget,” said Bollinger. “The piers were lined with people holding ‘Welcome Home Soldier’ signs, and whistles and horns were blowing. I was mighty proud to be an American.”

Upon returning home to Indianapolis, Don reunited with his girlfriend, Shirley. The two were married in November of 1945. It was two years later that Bollinger joined the fire department.

“I spent 33 years and eight months with IFD,” says Bollinger.

The highest rank he held was that of Deputy Chief. His guardian for the Honor Flight was IFD Engineer Mike Finnigan. Finnigan was born at Fort Benjamin Harrison. Finnigan’s father, Army Major Donald C. Finnigan, along with his mom and his sister are buried at Arlington National Cemetery.

“Their gravesite is a bit far from where we had our tour, but I pointed it out to Don as we drove by to wave at them,” said Finnigan. 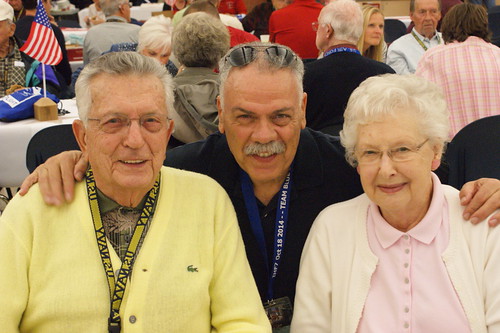 WWII Navy veteran and retired IFD Lt. Harold Plumber enlisted when he was 17. A Tech High School student, he was about to embark on a world tour of a lifetime. Having trained as a gunner on a 20mm anti-aircraft gun, Plumber set sail July 4, 1944, from Pier 92 in New York City and cruised through the Panama Canal for Australia. His ship, the USS LST-910, unloaded supplies in New Guinea and sailed north for Asia.

The crew of the USS LST-910 saw action in Leyte at the Battle of Surigao, as well as Luzon and at Manila Bay. Plumber’s ship was part of the consolidation and capture of the Southern Philippines from March to May 1945 and served during the Borneo operation.

“I served two years, two months and 22 days in the Navy,” recalls Plumber. “It was quite an experience for a 17-year-old boy who had never been further than Fort Wayne.”

Plumber shared with me that he has spoken more about his WWII experience in the days surrounding the Honor Flight than he has cumulatively since 1945.

“I didn’t like what I saw, but I had a job to do and didn’t want to talk about it,” said Plumber.

After the war, Plumber worked for a Naval Avionics subcontractor before joining the Indianapolis Fire Department. For 38 and a half years, Plumber “couldn’t wait to go to work” with IFD. He loved his job and the people he worked with.

On the Honor Flight, his guardian was Timothy Smith, Deputy Fire Marshal with IFD.

“I saw Tim get out of his car in our driveway, and I just smiled, thinking ‘I know that boy,’” shared Plumber.

The Honor Flight turned out to be beyond imagination for Plumber.

“It was fabulous. I couldn’t have dreamed the reception we got everywhere we went,” said Plumber. “My faith in humanity is restored.”

Adoring, grateful crowds greeted the veterans at all the stops.

Smith, who’s dad was a WWII veteran, wanted to be a guardian on an Honor Flight to honor the memory of his dad, Jack W. Smith, who was the recipient of the Purple Heart 49 years after serving.

“My dad never spoke of his WWII experience. Then in 1993, he called me to tell me he was awarded the Purple Heart,” said Smith.

Smith’s dad, Jack, served in the Marines during WWII and was an Army Paratrooper during the Korean War. During WWII, Jack was injured but refused to leave his unit, so he was treated at the field hospital. The hospital scribe went on to become a Colonel in the Army and filed for the Purple Heart on behalf of Jack Smith in the late ‘80s before he retired.

“This award meant a lot to my dad and to me and my brothers who never knew about his injury,” stated Smith.

The last stop on the whirlwind day was witnessing the changing of the guards at the Tomb of the Unknown Soldier.

“‘Taps’ gets me every time,” said Plumber.

Bollinger was humbled by driving through Arlington National Cemetery.

“The number of perfectly-aligned grave markers is unbelievable,” said Bollinger. “I just can’t believe how many have died for our country, and I am one of the lucky ones.”

Just when they thought the day couldn’t get any better, when exhaustion is creeping over them and they’re still floating on adrenaline from the excitement of the day, the homecoming back to Indianapolis tipped it for these veterans. Greeted by thousands of friends and family was the icing on the cake for these selfless men who served our country. Gov. Mike Pence and his wife were also among the well-wishers at Plainfield High School.

“I felt like I was really something!” said Bollinger. “The governor even shook my hand!”

The event was emotional not just for the veterans.

“As I edit all of the photos, I see the bonds formed over the span of the day and and previous evening,” said Mark L. Kidd, photographer for the Honor Flight. “I’ve seen vets grow out of shyness, turn from sickly to vibrant, from stand-offish to embracing. It’s a beautiful experience for all of us. I do their mug shots when they come in on Friday, and they’re usually a foot away from their guardians, or the guardians are standing next to the vets’ wheelchairs.

Twenty-eight hours later, I do portraits while waiting to board, and they have arms around each other, heads touching. The guardians are kneeling next to the vets in their chairs. It’s amazing. One of our biggest criers this time was also the biggest firefighter. Simply beautiful. I can usually make it home to edit before I start crying. This time the most indelible moment came when a vet rasped into my ear, ‘I am having the time of my life,’ and it was only 11 a.m.”

To volunteer or apply for the Honor Flight, visit indyhonorflight.org.

IFD is working on a “Fill The Bucket” campaign to help provide Guardians for the Indy Honor Flights. Email David Harman to contribute at David.Harman@indy.gov.