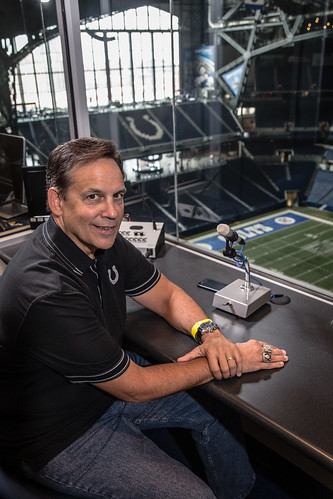 In his first assignment as a PA announcer with a professional sports league almost two decades ago, Mike Jansen was chirping for a minor league hockey team in something called the International Hockey League where all 17 teams were located in the United States.

Though his voice crackled with appropriate tones of excitement, sincerity and dignity at most moments during the Indianapolis Ice games at the Fairgrounds Coliseum, Jansen was part of the almost vaudeville show employed by the organization’s front office. The team’s entertainment philosophy was simple: if it is not criminally illegal, it could be inserted into our game day lineup of zany promotions.

Who else unleashed the trio of chubby Elvis impersonators as their mascots? What other team would host the Village People at not one but two post-game concerts? What professional franchise would reveal a bawdy belching contest during an intermission on Men’s Night?

Yes, it was our city’s professional hockey franchise that once finished 17th among the 17-team IHL and was the only team not to qualify for that year’s playoffs.

Thus, Jansen was called upon by his superiors to juice up the PA. No handcuffs on the comments. Hockey purists may have been excused for roughing calls when they heard the rink announcer slip into the voice of Barney Fife on penalty acknowledgements, Pee Wee Herman to announce a goal scored by the opposing team or Arnold (the Terminator) Schwarzenegger at any time deemed almost appropriate.

“We wanted Mike to be part of our crazy approach to the game,” said Brad Beery, then game operations director for the Ice. “We hoped people would find his voices to be funny.”

It is assumed most fans appreciated Jansen on the microphone. The Ice averaged over 5,000 fans, a team attendance record.

“It was very hectic,” remembered Jansen. “The game was very fast-paced, and at first, I really didn’t understand the game.”

But Jansen did learn the game, and he quickly grabbed on to the secrets of being the voice at sporting events. This audition led him to a tryout to become the stadium announcer for another Indianapolis team in 1998. The job was for an NFL team and not a minor league hockey team.

“I really didn’t have any interest to try out, but I had friends call me at work asking me if I was going to try out,” Jansen recalled. “So with their encouragement, I decided give it a try.”

The tryouts were held on a muggy, blistering hot July day, and Jansen called the RCA Dome a sweatbox as outdoor temperatures soared to almost 100 degrees. The air conditioning was off as almost 400 persons of both genders poured into the stadium for a once-in-a-lifetime experience, and that was just to audition for the position.

Three hours after his arrival, Jansen’s name was finally called. “I was considering leaving,” Jansen said. “But my name was called, and I went up and read a script.”

That was Round One. Jansen was invited back for Round Two when the marketing staff turned the event into a tournament bracket for the last 16 competitors. This competition sliced down the field to two voices – local voiceover talent Artie Widgery and Jansen. The two were asked to announce one half of the pre-season game between Ryan Leaf and Peyton Manning.

The football experts gave Manning the nod in the battle of the top two draft picks. Jansen proved to be the last voice standing after the game.

“They asked me if I wanted to work with the Colts,” Jansen said. “I said yes, and the rest is history.” 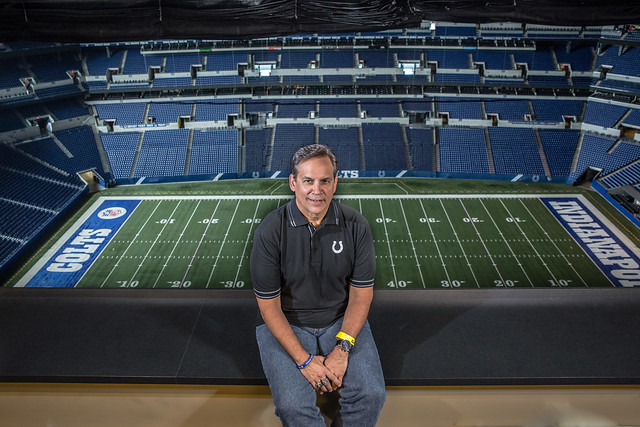 And what a history for the 52-year-old Bishop Chatard and Ball State radio and television graduate. Not only is he entering his 18th season in the announcing booth on Sunday afternoons, but he is deemed one of the top stadium announcers in the NFL with his accuracy, timing and electric voice work. Jansen is only the third PA announcer for the Colts in their Indianapolis history (Rick Miles and Dave “the King” Wilson were his predecessors).

“Jansen does great work because he has a passion for the job and the Colts,” said senior executive Pete Ward. “He’s a true homer who works hard to give us a home field advantage. The NFL is a sport where fans can participate and make a difference. Mike understands that thinking.”

Ward admits he sometimes has to lasso the creativity of Jansen, who initiated the “first down” chant and has cracked his voice whip to motivate the home fans for third down defensive stands.

“Actually, my job is pretty surreal after all these years,” Jansen admitted. “I hit a little button, and my voice goes out to the stadium and becomes part of the game day experience. When the game is over, I leave Lucas Oil Stadium with the fans, and we all pour out into the streets. Nobody has a clue that they had heard me for the last three hours.”

However, other sports officials have known about Jansen, who lives in Broad Ripple with his wife Bev, a magistrate in Marion County Juvenile Court, and their three children, Delaney, a sophomore at IU; Alec, a senior at Cathedral; and Melanie, a sixth grader at Immaculate Heart of Mary School. He has announced both the Big Ten football and basketball events in Lucas Oil Stadium and Bankers Life Fieldhouse; filled in for the Indianapolis Indians at Victory Field; and will announce the IHSAA football championships this November.

Jansen has partnered with the IHSAA on full time career video work. He has completed several video projects (12-15 minutes in length) that have impacted the state’s high school family. Those stories have included features on legendary announcer Tom Carnegie; the iconic Hatchet House in Washington; the volleyball history in Muncie; and the 1971 East Chicago Washington basketball team.

“I love storytelling, and I thoroughly enjoy each aspect of the process of taking an idea to a finished piece,” said Jansen, who completes most facets of filming, editing and other production components in his home’s cozy, computer-filled basement.

Jansen dives into these projects with the same passion he takes to the microphone. As part of the DVD on the Rensselaer Central Bombers football championship last fall, he devoted a chapter of the video to a longtime fan who battled cancer during the title run by his Bombers.

“The chapter was a compilation of his thoughts and the team’s comments on him,” Jansen said. “It was a powerful story.” 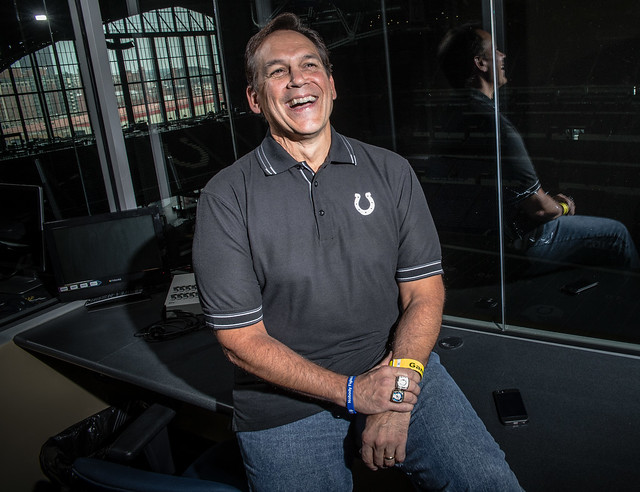 Jansen, a devoted Colts fan, fondly recalls that his biggest career highlight came when the Colts defeated New England in the AFC Championship Game at the RCA Dome in January 2007. The victory sent the Colts to the Super Bowl. Now, he awaits another career mountaintop.

“It would be fun to do character voices on an animated feature or cartoon series,” he said. “I want to be flourishing in the video publishing world or developing content for TV.”

But he also realizes that he is living out a dream on August 22 (the first pre-season game at home against the Chicago Bears) when he strolls into the announcing booth at Lucas Oil Stadium as the stadium voice of the Colts.