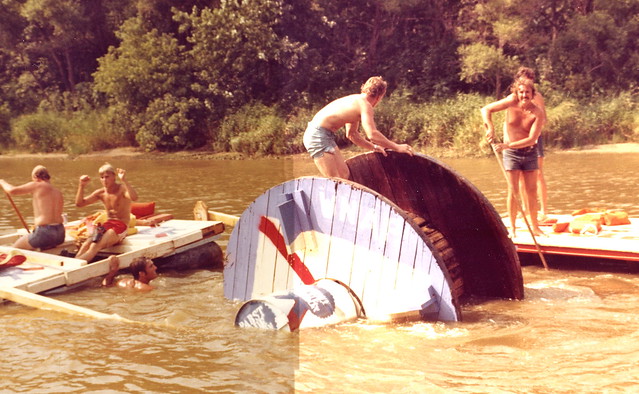 Twenty years ago today (give or take a decade or two), Sgt. Pepper taught the band to play—so sang The Beatles in 1967. However, the song’s lyrically famous “one and only Billy Shears” couldn’t have imagined what music WNAP would soon be playing on the radio in Indianapolis, or its inventive listener promotions. Forty years ago this month (July 28, 1974, to be exact) WNAP—arguably the city’s most important radio station at the time—launched its most famous—and to some, infamous— promotion: a Raft Race on the White River between Nora and Broad Ripple. “[It] was a happy, sun-drenched, smiley-face celebration of the younger generation in Indy,” says Mike Griffin, former WNAP jock. “The WNAP Raft Race was a blend of Woodstock and the first turn at the Speedway on Race Day,” recalls former morning host Bob Richards. And leave it to former Buzzard newsman (and former WTHR news anchor) Tom Cochrun to cut to the chase. “It was a party—an all-day social event choreographed with great rock and roll. ‘Anything goes’ was the mindset. And it did.”

The all-day float party and rock concert at Broad Ripple Park served two primary purposes: to provide a memorable, good-time event for Indianapolis, and to promote WNAP’s free-form music format and its rebel radio jocks. “Just crazy people having fun on the air…and we were allowed to do that,” recalls Cris Conner, 69, longtime WNAP morning show host and event co-founder. He was, along with other organizers, stunned by the Raft Race’s rapid success. “We thought if we had a hundred rafts it would just be amazing. When we showed up the first year and had 400, we knew we had a hit; and to then end up with 70-80,000 people in Broad Ripple Park? We never anticipated it to be what it became,” says Conner. No less an authority than Buster Bodine remembers the Raft Race as a seminal part of growing up in Indianapolis. “An annual tradition similar to what Hoosiers enjoy every May. The only thing missing was Jim Nabors singing Freebird,” says Bo Honey.

Here’s how it worked. Rafters would put in the river at a cove near the Landings Apartments, just north of the Keystone Avenue bridge. “We encouraged life vests, which nobody wore,” says a smiling Conner. Two-and-a-half miles later, they flooded in to Broad Ripple Park for a concert. Artists would include REO Speedwagon or Faith Band, and locals musicians, too. “If you were a local band, you played it,” says Conner. “It was a positive, creative birth of the tribe, a ‘wow, look at how many of us there are,’” adds Griffin. “There had been cool concerts in Woodstock and Golden Gate Park, but this was really happening in Naptown—in Indianapolis! And we were the party.”

While advertised as a race, it really wasn’t. Most rafters weren’t interested in floating down the river in record time. They were content enjoying liquid (and perhaps “other”) refreshments while listening to the Buzzard and showing off their rafts. And my, what creations! “They were anything and everything, and inner tubes, too,” remembers Conner. “People bought 50-gallon oil drums to make rafts. Styrofoam, milk containers…hundreds of them with plywood on top. There was one that was 150 feet long, hooked up like a train, and I think there were 72 people on it. It had a swimming pool, a bathroom, cold running water and a band.”

Morning host Richards marvels at the time and effort expended on the often-buoyancy-challenged vessels. “Groups of friends worked for weeks building and painting their rafts. The improvised watercraft resembled submarines, autos, anything one could imagine. A commercial entry from a bar called Godfather’s featured a huge rectangular bar and many young women, each wearing nothing more than a small white bikini and a smile.” “I doubt that any of us thought in our wildest dreams we would see the awesome, creative entries that we did,” recalls Griffin.

All of this, of course, unfolded in front of Broad Ripple villagers. Conner says neither the radio station nor the village quite knew what to expect, and as the event grew in scope and attendance, WNAP found itself answering questions. “Some of the residents were bothered by it, but they put up with it,” Conner says. “I remember we had a 90-year-old man at a meeting about whether we were going to be able to [return] to Broad Ripple, and he stood up and said, ‘You know, every year these people come by and they take my lawn furniture and they pee in my yard, but you know, they’re all nice people.’ I think he was a big sway in allowing us to come back.” Another factor in the station’s favor was former mayor Bill Hudnut, Conner says. “He was a big fan of WNAP. He knew good P.R., and he was behind it all the way. In fact, if it hadn’t been for Bill, we might not have had [future races].”

Broad Ripple was the music hub of the city at the time, and WNAP co-sponsored many events there. When thousands of rafters showed up, it likely created a financial windfall for local merchants and restaurants. Besides, says Conner, Broad Ripple was a natural because it’s where all the freaks were hanging out.

Some go so far as to suggest the Raft Race played a role in shifting attitudes about the counter-culture of the era. “We were not ‘establishment,’ but a bit radical, especially for conservative Indianapolis in the late ’60s and early ’70s,” says Cochrun. “Indiana youth and young adults, discontented with WIFE, WIBC and a Top-40 world, embraced the peace-sign-wearing, counter-cultural vibe and hipness of WNAP. The Raft Race was a way to celebrate all of that.” 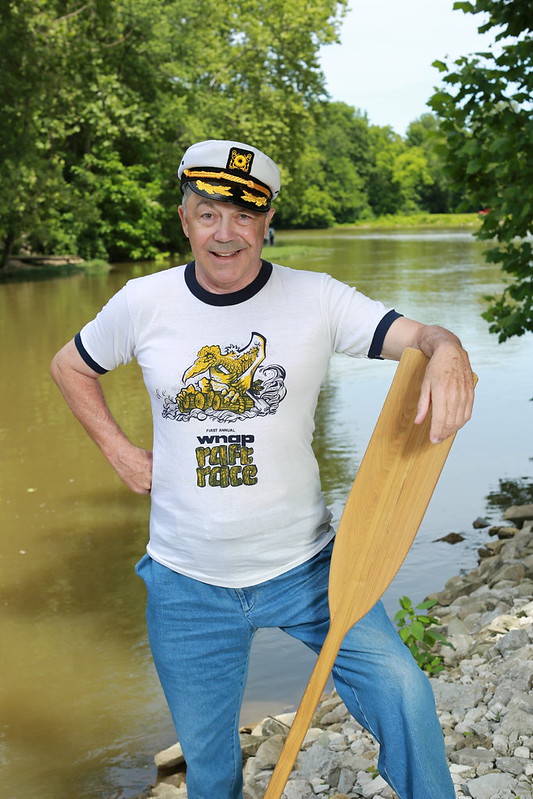 Richards recalls it as a seminal event that resonated with listeners. “The people who became passionate about the Raft Race believed that WNAP was a living, breathing entity; a touchstone for their generation.” Longtime listener (and, perhaps, first-time caller) Dave Fulton says, “Anyone who lived through that era remembers WNAP, and the first subject they bring up is the Raft Race.” Fulton’s recent film, Naptown Rock Radio Wars, explores the station’s rich history and significant community impact. “It was a cultural phenomenon,” he adds.

At its peak, there were 1,400 raft entries, and pre-race traffic and parking became an increasingly difficult challenge. City police handled the cars, sheriff’s deputies the rafts, and Bodine was, well, somewhere. “My assignment was traffic reportage via chopper borrowed from sister station WIBC,” recalls Buster. “My job was to help folks get into Broad Ripple Park, and more importantly, find where to park and unload their floating creations. Naturally, I pretty much spaced all of that (I was no Big John Gillis) but instead enjoyed hovering over the park, blabbing incoherently on the FM radio, yelling at cars below and skimming about five feet over the White River doing about 150 mph.” Remarkably, says Conner, there were few arrests and no serious injuries. However, after nine years of rafting, the station pulled the plug on the annual event. “It got too big,” laments Conner. “That’s when it ended.”

You know that stack of 1970s-era LPs in your basement? Flip through them and find the Doobie Brothers album, What Once Were Vices Are Now Habits. On it you’ll find the unofficial theme song of the Raft Race. Eric Edwards, production manager at the time, explains why. “One song used in the promos was Black Water. It perfectly captured the mood of lazin’ down the river.”

“Well, I built me a raft and she’s ready for floatin’…
And I ain’t got no worries ’cause I ain’t in no hurry at all.”

Happy Anniversary, Buzzard. Many of us wish you’d never left the nest—or the river.

Hitting the Bullseye: A Family Affair