Indiana’s history is a tapestry richly woven by people and events over our 200 years of statehood. The Eugene and Marilyn Glick Indiana History Center, the home of the Indiana Historical Society (IHS), is one of many institutions archiving the best of Indiana’s past, allowing visitors a unique introduction to its collection through their exhibits, library and publications. However, one of their best kept secrets is that one of the most prolific biographers keeps an office on the fourth floor. 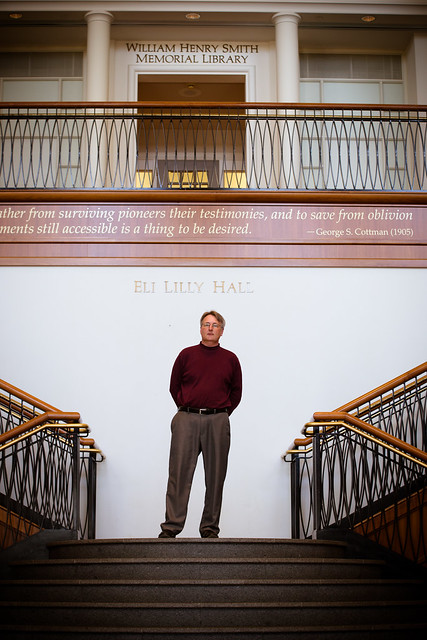 Writing about notable persons of the past and present has been a lifelong passion for Ray Boomhower. Originally from Mishawaka, Boomhower graduated from IU with a degree in journalism and political science, making his way to Indianapolis after working for a few newspapers. He landed a job with the Indiana State Museum, which led him to the IHS in 1987.

After holding various editorial positions at the IHS, Boomhower found himself as their senior editor in 1999 and has recently been named Interim Senior Director of the Indiana Historical Society Press. It wasn’t until the move to a more prominent location inside the beautiful History Center that the IHS had a more public face. This move and subsequent expansion has dramatically influenced their growth.

“With our new building came increased awareness of the Historical Society,” says Boomhower. “Our visitors’ experience of Indiana history is unique.”

Concurrent with the goal of preserving Indiana history, the society publishes books sharing the legacy of many Hoosiers. Boomhower is credited with writing biographies of famed WWII journalist Ernie Pyle, WWII fighter pilot Alex Vraciu, Civil War General Lew Wallace, columnist Juliet Strauss, suffragist May Wright Sewall and WWII photographer John Bushemi, to name a few. His book, “John Bartlow Martin: A Voice for the Underdog,” a biography of the Hoosier journalist and political insider, was recently published by the Indiana University Press.

The Pyle, Vraciu, Wallace and Wright Sewall books were part of the youth biography series, which are written for a middle school or high school audience.

“Many adults also enjoy our Youth Biography series,” shares Boomhower. “The books are not very long and allow a quick read on notable Hoosiers.”

Boomhower’s book on WWII fighter pilot Alex Vraciu was a unique experience for Boomhower. “It was the first time I was able to write about someone who was still living,” says Boomhower. Vraciu graduated from DePauw University, where his antics are still legendary. The fearlessness Vraciu exhibited from a young age enabled him to be a daring fighter pilot and continued on into adulthood; he passed away earlier this year at the age of 96.

“Ray’s done a great job of keeping it interesting,” says former IHS Editor Doug Clanin, Boomhower’s predecessor. “He is a secret weapon in the IHS. He does a lot of good work, keeping a low profile. It’s not uncommon to not know what he is up to, and then I see a new book of his available on Amazon. Ray is a prolific author who does an outstanding job touching on lives familiar to us but many that we haven’t known.”

Boomhower’s latest research is being done on his own time, away from his editorial responsibilities. His focus this time is about journalist Robert Sherrod. During WWII, Sherrod was to the Marines what Ernie Pyle was to the US Army. With his book, “Tarawa: The Story of a Battle,” Sherrod published one of the finest firsthand accounts of fighting in the Pacific during WWII. And while Sherrod is not from our state, given Boomhower’s journalism background, Sherrod has been an iconic figure. “I was surprised no one had written about him,” shares Boomhower. 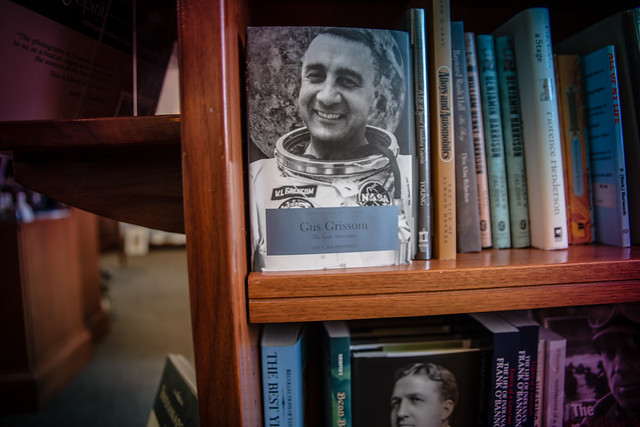 While all of Boomhower’s books are historically significant, perhaps his most important contribution to date is on Hoosier astronaut Gus Grissom.

“In the 1960s, a portable TV was wheeled into the classroom, so we could watch a NASA launch,” shares Boomhower. “As a kid, going to Spring Mill State Park to see the Gemini 3 ‘Molly Brown’ spacecraft was very exciting for me. Gus Grissom was my childhood idol.”

“His biography of Gus Grissom, meticulously researched as any other project Boomhower has written, brings Grissom back to hero status, repairing the damage done in the movie based on the novel by Tom Wolfe (‘The Right Stuff’),” says Clanin.

Accomplishing the feat of restoring honor to his boyhood hero is perhaps Boomhower’s greatest personal achievement. Certainly the Grissom family and friends and NASA would agree.

Through the ever-changing exhibits, members and guests may experience a sampling of what the IHS has to offer, but for more in-depth knowledge of some of our more famous Hoosiers, read a biography of a home state hero.

Boomhower’s books are available on Amazon.com or at the Indiana Historical Society’s Basile History Market (shop.indianahistory.org). Please visit indianahistory.org for news and events such as the summer canal concert series.

Life on The River: Reflections by Linda ...