The Monon Boasts a Bent Rail 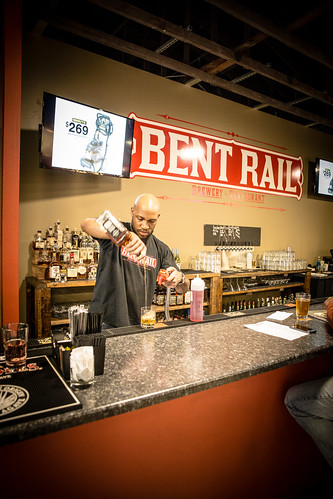 The Bent Rail Brewery opened quietly along the Monon off Winthrop and 53rd Street in late February to introduce its lunch and dinner menu along with some local brews offered on tap. Patrons eagerly await the Bent Rail’s own craft beers that are in early stage production. An anticipated but unconfirmed launch date is rumored to be sometime in May.

Brewer Bradley Zimmerman casually asks for patience as he perfects their draft production system. Zimmerman has spent the last decade at the oldest brew pub in Seattle. A native Hoosier, Zimmerman has found his way home to continue his art at the Bent Rail. Besides, he possesses the requisite beard, so he must be legit.

“We have patrons that pop in on a weekly basis since we opened our doors, asking if we have our beer ready for tasting,” says Cari Crowe, director of sales and one of four managing partners with the Bent Rail. “And we have to tell them ‘not yet.’”

Managing Partners Crowe, Zimmerman, Craig Baker and Derek Means set goals for their Bent Rail venture: a family-friendly atmosphere that’s not only the immediate neighborhood’s bar, but also a destination for those who aren’t in the neighborhood.

“We want to be this neighborhood’s bar and a good place for dinner or lunch,” says Crowe. “With our soft opening, we are able to introduce our food which is as carefully selected as our beer. We did not want to be a brewery where food is an after-thought.”

Aside from breads, every food item is homemade in their kitchen, including their salsa, hummus, guacamole and chicken salad. The menu focus of sandwiches, soups and salads appeals to the masses with many gluten-free options for those with sensitivities. Local seasonal produce and meats are featured as well, and they are working on curing their own meats.

Crowe is in a unique position of being only one of 13 people in the state of Indiana who is a certified Cicerone. Cicerone was created in response to the growing craft beer movement and influenced by the Sommelier wine program. According to the program, “The Cicerone Certification Program certifies and educates beer professionals in order to elevate the beer experience for consumers.”

The Cicerone program focuses on the history, style, beer and food pairing, proper pouring, draft technology and proper maintenance of a draft system. “The one element I find most useful is being able to look at a beer list and being able to tell a patron what a beer is like without tasting it,” says Crowe.

For the beer connoisseur, the Bent Rail promises to keep a balanced beer selection with thoughtful consideration to current trends and seasonal tastes.