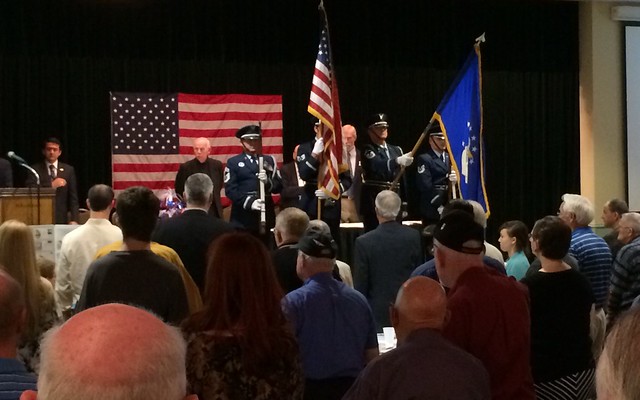 The Ernie Pyle Chapter of the World War II Roundtable was founded in 1987 by Bob Currie and Wilbert Watson. Currie and Watson were members of The Civil War RoundTable, comprised of history buffs and historians that met to discuss the Civil War. Being 122 years after the event, all information was written history. Both men were interested in World War II and decided that they should start a new round table to “continue the oral history and legacy of the WWII veterans.”

Since that time, the Indianapolis chapter of the Ernie Pyle WWII RoundTable has grown to become one of the most active in the state. Monthly meetings provide a forum for speakers relevant to veterans, with an emphasis on preserving the military history of those who served.

Special guest Lt. Col. Richard E. Cole spoke to a sold-out house on October 21. Cole served as General Doolittle’s co-pilot during the famous raid over Tokyo on April 18, 1942. Now 99 years old, Cole is one of four Doolittle Raiders still living. He shared his journey leading up to the raid and his amazing experience afterward. 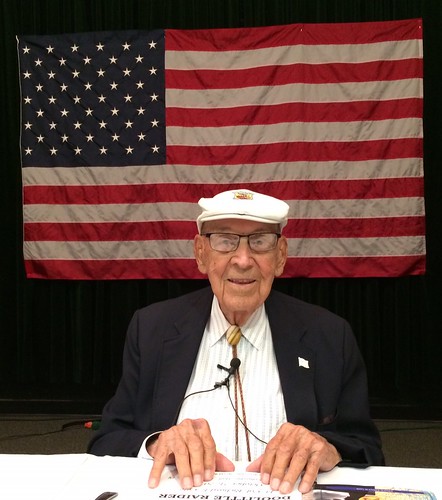 Moderator Brian Anderson led a fireside chat with Cole, covering the highlights and details of the incredible Tokyo Raid mission.

Upon volunteering for the mission, it wasn’t until the second day at sea after leaving San Francisco that the details of their mission were announced. According to Cole, the reaction of the crew was “jubilation, but then a silence fell over the ship with the reality of the gravity of their objective.”

What is amazing is that all 16 specially-calibrated B-25 bombers flew off successfully from the deck of the USS Hornet.

The raid was a success in that all 80 men survived the mission. In the aftermath, several were captured, three were executed by the Japanese and one died while in a prison camp. The remaining 76 survived. Upon jettisoning their aircraft, Cole became separated from the rest of his crew,  landing in a pine tree, where he spent the night. Due to the blackness of night, he did not realize until the dawn that he was only 12 feet above the ground.

The success of this mission could not have occurred at a more critical time for a U.S. morale boost. A few of the men from the Tokyo Raid were flown home to work the War Bond circuit, while most of the men stayed in Asia to serve in the China-Burma-India Theater. Several books have been written about the Raid, and the book, 30 Seconds Over Tokyo, by Capt. Ted W. Lawson, Doolittle Raider, became a blockbuster movie.

If you would like to attend a meeting or become a member, you are welcome to do so. The monthly meetings are held the fourth Monday of the month at the Knights of Columbus on 71st St., just west of Keystone Ave. Additional information is available at militaryroundtable.com.