Saving homes, saving lives and saving families is what retired Assistant Carmel Fire Chief Jim Martin has done for decades. It’s a legacy he’s shared and passed down to his two sons, Dave and Rick, and now his grandson D.J., too.

In a world where every second means saving a life, there is little opportunity to take time to appreciate those who keep us safe. But through the Carmel Fire Buffs Museum, Martin is giving everyone in the Carmel community a place to honor and appreciate the men who’ve dedicated their lives to serving others.

Most visitors see the museum as a place to climb aboard vintage firetrucks, peruse fire department memorabilia and pretend if even only for a moment that you’re experiencing the adrenaline rush of a fire run. But to Martin and his family, the history of the museum and the fire department have a much more significant meaning.

Martin’s history with the Carmel Fire Department began in 1960. As a young man, Martin’s world was working as a mechanic along with his brother, Charlie, in their father’s repair shop, Martin’s Garage. The world changed one day for the three men when they were in the shop and saw smoke coming from a fire. They headed for the fire to help, and when they arrived, they found Cyrus “Skip” Clark, fighting the fire.

Clark was one of Carmel’s first paid firemen and a classmate of Martin’s brother. In the brief conversation the men had after the blaze was extinguished, Clark shared that the Carmel Fire Department was in desperate need of volunteers and he urged the three men to attend a callout meeting that night for those interested in answering the call. The conversation would be the last the Martins would have with Clark. Later that day while en-route to another fire emergency, Clark was struck by another vehicle and did not survive the accident.

In honor of their friend, who remains CFD’s only casualty in the line of duty, the Martins answered the call and attended the fire department callout meeting.

“I don’t know if we would’ve joined the department if that hadn’t happened,” Martin says. “But now I can’t imagine doing anything else.”

In his 36 years with the Carmel Fire Department, Martin responded to countless emergencies, repaired and maintained fire engines at the station and raised a family.

That family included not only his two sons, Dave and Rick, but the Carmel Fire Department family.

“In a job which requires spending many hours away from home, the folks here become your family,” says Dave, now a Lieutenant at ladder 41.

Standing outside the museum, Rick, now a station engineer at ladder 43, points to a little white house just down the street that was once the family home.

“Our family lived there, but we were always at the station,” he adds. “We came here to celebrate birthdays, Halloween, Thanksgiving and Christmas. It’s home. Our dispatcher at the time, Sally Lafollette, would take care of us and even changed my diaper here in the basement.”

So through the years, Jim went on raising his sons and taking care of his fire department family. Applying his mechanics skills, he helped repair and maintain the trucks and the building in between fire runs, saving the department hundreds of thousands of dollars a year. The department had not just become his family, it was his life. 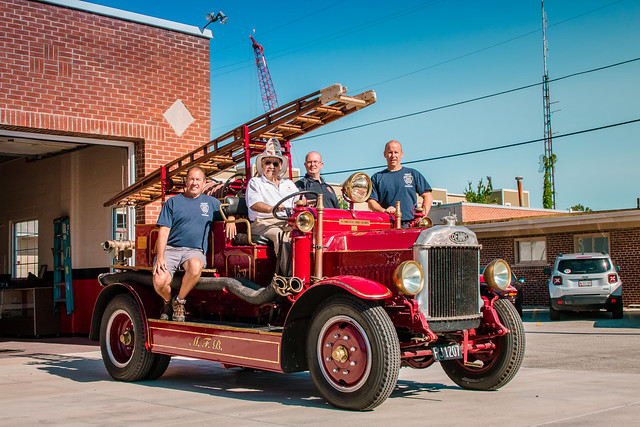 Such was his life that he got a call from Hoosier Fire Equipment in Valparaiso about a fire truck available for sale. Jim went up to Valpo to look at the rescue truck, a 1953 Seagraves from the Kokomo Fire Department. Hoosier Fire was asking $2,000 for the truck, and Jim wanted it badly. He negotiated with the dealer who agreed to sell it for $1,000. Needing to come up with the money quickly, Jim phoned the department and told the Lieutenant to phone 10 people and ask for a $100 donation to start a Fire Buffs club. The Lieutenant found not just 10 donors but 18, and the Carmel Fire Buffs Club was born.

Now, visitors to the Carmel Fire Buffs and Fire Department Museum can see the 1953 Seagraves and a collection of other special fire rescue trucks. Each one has a story, as Jim will gladly share. Stories like the one behind the 1922 Dennis fire engine which made its way to the United States all the way from Masterton, New Zealand. Jim hasn’t been able to trace the fire engine’s full history, but once it arrived in Carmel, Martin began restoring it to its full glory. All fire engines at the museum were given as donations. Something most visitors may not see is the wall in Martin’s office where he’s acquired dozens of awards and accolades during his time on the force. The City of Carmel bestowed upon Martin the Range Line Pioneer Award in 1994, its highest honor given to firefighters. He’s also been awarded the Outstanding Civil Servant Award, and Carmel High School awarded him with a Hall of Fame Plaque.

No other honor could be greater, however, than the one Martin received in 2016. In October of last year, the City of Carmel dedicated its Maintenance and Training facility at 106th and Gray Road in Martin’s honor, making it officially the James K. Martin, Jr. Carmel Clay Fire Department Maintenance Facility. A first class facility with the latest technology to maintain and repair equipment and loaded with all gear necessary to train new recruits. The name couldn’t be a more perfect fit considering all Martin contributed to the Carmel Fire Department community.

The honor Martin says he’s most proud of is watching his sons and grandson follow in his footsteps.

“At one time, I thought I wanted to do this just to advance my career path,” says grandson D.J., who works at the Hamilton County Dispatch and is working to be a certified paramedic. “But now that I’ve taken the medical certification classes and learned how to save lives, it’s about serving the people and saving lives.”

Four generations of Martin men, four different paths, but all agree that the glue that keeps them where they are is the sense of brotherhood and family.

Check out the Carmel Fire Buffs and Museum at 210 1st Avenue SW, Carmel. Jim Martin is often at the museum, but it’s best to call him at 317-370-6437 to schedule a visit. Go to the museum’s Facebook page, facebook.com/carmelfirebuffsmuseum for more information.