We heard about a special event and asked area resident, storyteller and communications strategist Jeff Owen to share his account with our readers. – Dann Veldkamp 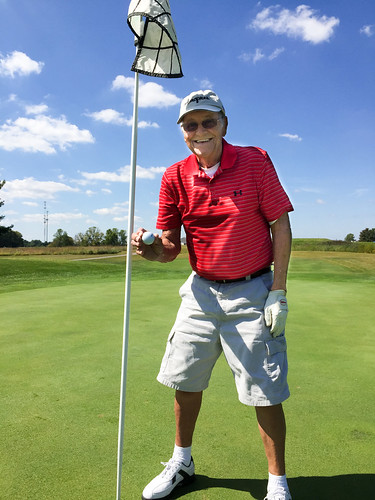 Normally, that’s not big news. We’ve played in golf outings for years. Sometimes we play good golf. Sometimes not so much. Mostly, we support good causes and enjoy the camaraderie.

But today was different. Playing golf was a big deal for Henry, who turned 81 in August. Earlier this year, he contracted pneumonia, had surgery and endured five hospital stays. We worried about him, but he survived and went through rehab to regain his strength. He returned home, took a vacation to Florida and went back to work. (Yes, at 81 years old, he works five days a week at the family business.)

To our surprise, Henry said he would like to play in the PIFJC event, which raises money for many causes in our community. After a trip from Danville, Illinois, he said he would not push himself too hard but would just pitch, putt and ride along in the cart.

But Henry was eager to get back on the golf course and use a new set of golf clubs his family gave him before he became ill. One of his goals during his recovery was using the new clubs. So today, on a sunny Indiana afternoon, Henry got out of the cart and played the full game. He decided not to just pitch and putt. He was feeling great.

He stood at the first tee (No. 3 on Middle Nine, Par 3, 164 yards, water hazard left and sand traps right). He addressed the ball with his new 6 iron.

Golf Digest says the average golfer’s chances of hitting a hole-in-one is 1 in 12,500. The odds are probably higher if you had not played in two years, never used the new clubs, had surgery five months earlier and celebrated your 81st birthday.

We were awestruck. The foursome in front of us saw the shot. (The group included Franklin’s mayor Joe McGuinness, one of the first to congratulate him.) Two volunteers at the tee box saw it. We celebrated, took photos with our iPhones and sent a text back to the event organizer. Word quickly spread around the course. As we continued play, other golfers stopped by to shake Henry’s hand. One woman rubbed the top of his head, hoping it would bring luck to her game.

A few holes later, Ted Bishop, past president of PGA of America and owner of The Legends, stopped by to congratulate Henry. He invited him to stay for the event’s dinner and awards ceremony. They wanted to honor him. 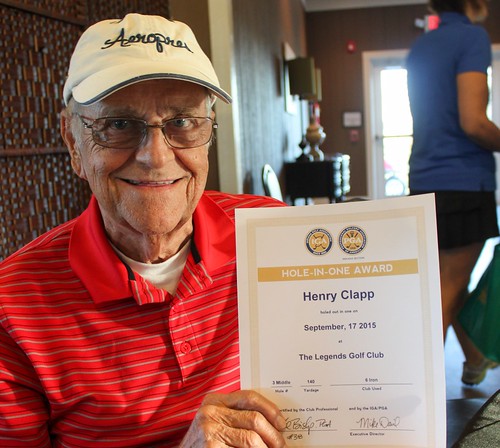 At dinner, Bishop presented Henry a certificate and asked him to speak to the large crowd attending the event. Henry thanked Bishop and shared his story about his illness, recovery and desire to play with the new clubs. It was his only hole-in-one in 60 years of playing golf. He noted it was tradition for a hole-in-one golfer to buy drinks for other golfers. Instead, he pledged a $500 check to PIFJC.

Henry received a standing ovation from the large crowd, and several people (most of whom did not know Henry) wiped away tears. His donation will help organizations continue their great work.

Henry is a special man. He’s always been an inspiration to his family. It was an honor to watch him achieve this sports milestone and see how humbly he accepted the accolades. More importantly, though, it was amazing to witness his decision to use the special moment to pay it forward.