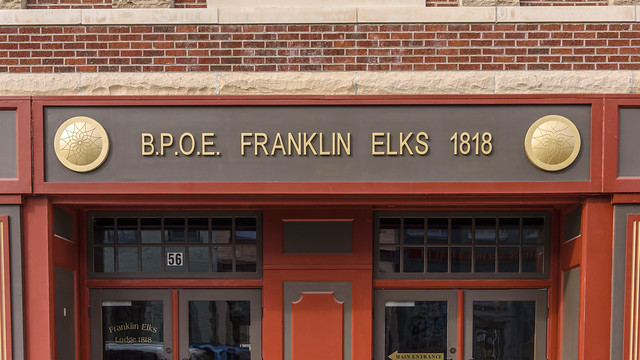 “Best People On Earth” is often substituted for the official meaning of the acronym B.P.O.E., “Benevolent and Protective Order of Elks.” In years past, the “Elks” organization was considered a cigar-smoking, card playing, cocktail drinking men’s club, but the Elks have evolved into a diverse organization with a mission to improve their communities through charitable donations.

The Franklin Elks Lodge was established in 1950, and as the only lodge in Johnson County, it has the largest membership in the state of Indiana at 750 members. In January 2016, they moved to a new location at 56 E. Jefferson St., Franklin, which had sat empty for 10 years, joining the efforts of revitalizing historic downtown Franklin. Replicating the original building façade, their new home is the largest building in the downtown area, a testament to a part of their mission: to improve their community. 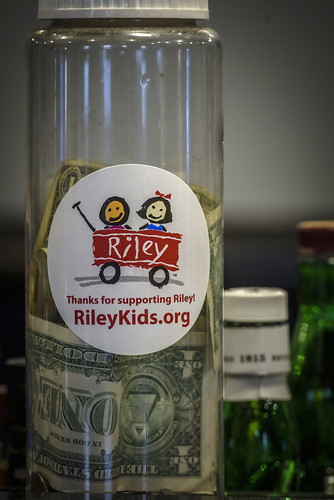 CHARITABLE DONATIONS
The additional part of their mission, charitable donations, comes through fundraising events throughout the year. The Franklin Elks Lodge has donated an average of $100,000 annually over the previous four years to cancer research, veterans, scholarships and 30 local youth-oriented charities.

The Elks are organized on a national, state and local level. Nationally and statewide, the Elks lodges pool some of their donations for greater impact. The U.S. government is the only entity that gives more money in scholarships than Elks. They award those scholarships as Open Class Scholarships based on need and academics; Legacy Scholarships for the children and grandchildren of Elks members; and Local Scholarships, smaller amounts awarded in the form of a check for books or related student needs.

Statewide, the Elks choose a project to support. The 60 Elks lodges in Indiana have chosen cancer research as their project for the past 50 years with a donation so significant that Riley Hospital for Children named a wing in their honor. In 2015, the state donations totaled $250,000. Franklin has consistently led the state in donations, contributing $40,000 to this total in 2015.

Nationally the Elks have a precedent for supporting veterans. In 2015, the Franklin lodge raised over $10,000 in donations, purchasing coats, boots, hats and socks from Walmart and Tractor Supply, which discounted or matched donations, and then delivered them to the V.A. Hospital in Indianapolis. Honoring those who served in the Armed Forces is significant to the Elks since it remains an exclusively American organization.

Donations come through monthly events like the recent Mardi Gras Cajun dinner, Monday night dinners, Saturday noon lunches in the fall and winter and annual events including the Charity Auction and Jammin’ for the Cure, but also through interest earned on an endowment and their member contributions. 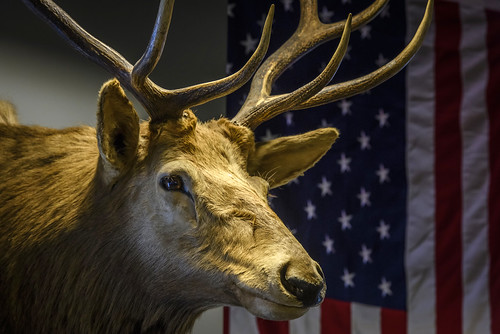 WHERE EVERYBODY KNOWS YOUR NAME
The most well-known fact about the Franklin Elks Lodge is that it is a private social club. Dues from membership fees along with alcohol sales and gaming are what pay the operation expenses of this nonprofit organization. The club is often compared to the popular television program, “Cheers,” where everybody knows your name, and they come to meet up with friends.

As the second oldest fraternal order in the U.S., members represent a cross-section of the community, but the values of those members are consistent. During the induction ceremony, one must profess to believe in God, be an American citizen, be of good moral character and be over the age of 21.

This attitude has been unchanging from the beginning of the organization in 1868 when a group of show performers called the “Jolly Corks” established in New York to elude the laws governing the open hours of taverns. When one of their members suddenly died, they quickly adopted a new purpose – to take care of his family financially. The core of the Elks organization has been preserved throughout the years to gather socially and to help take care of the needs of the community.

Elks lodges throughout the U.S. vary in their management and supervision, depending on whether or not they are incorporated. Some are recreational facilities that range from golf courses, swimming pools and restaurants but can also be simple single buildings.

The new facility for the Franklin lodge includes a rental banquet facility that will seat 300 people in a shabby-chic, exposed brick, contemporary looking room. The financial needs to complete the facility have yet to be met, but hopefuls say it will be ready by the end of the year.

PRESERVING TRADITION
Elks are dwindling nationwide, but the Franklin lodge is growing because of the member commitment and diversity of ages and types of members. Some people have even moved to Franklin to support the Elks lodge, and membership is up in general due to the new facility which also includes a card playing room for Bridge and Euchre nights and a living room for intimate gatherings. Nationwide Elks have just fewer than one million members and 2,000 lodges and will continue as long as future generations rally to support the mission of the organization.

Franklin Elks members would agree the acronym B.P.O.E. stands for “Best People on Earth” as they diligently support the efforts to be the “Benevolent and Protective Order of Elks.” Bob Swinehamer, native Franklin resident, longtime Elks member and former Exalted Ruler, concluded, “Our sites are set, and the sky’s the limit.”

You can learn more about the local lodge at elks.org.