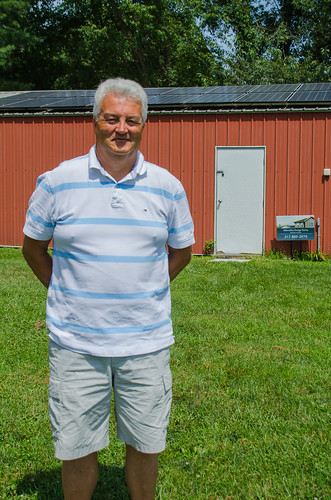 What do you do when you are a retired corporate manager that has had a decades long career in finance and information technology? What do you do when you have a degree in Environmental Science and have never used the learning from that degree? Finally, what do you do when your spouse is NOT retired and needs to stay active? If you are Brian Sanders, retired Eli Lilly and Company manager, you marry all those things together into something meaningful in retirement.

Solar electric energy intrigued Brian who lives on 14 acres in White River Township with his wife Terri. Conventional wisdom might say the geography and weather patterns in Indiana are not conducive to solar energy production. But Brian had seen some recent efforts at solar electric power, such as the large solar panel farm bordering the Indianapolis International Airport.

Also Brian is a self-proclaimed rebel who would prefer, if possible, to live “off the grid,” so he investigated the possibilities. The question he wanted to answer – is solar electric power viable for residential use in Johnson County?

His first challenge was finding a company that would do the design and installation here in the Indianapolis area. Several companies in the U.S. do this kind of work, but they are not located close enough to central Indiana to be interested in business here.

A six-month search yielded a company that, although primarily engaged in commercial solar installations, was intrigued by the prospect of doing a residential install. Brian began conversations with them to determine what would be involved in a residential system.

The next challenge was identifying a location for the panels. Photoelectric cells are most efficient when receiving direct sunlight, so a south facing orientation is required. Roof mounted solar panels are more resistant to damage from the high winds we experience with Indiana weather, so enough south-facing roof space must be available to accommodate all the panels.

Brian was lucky enough to have an out-building with a south-facing roof. This requirement, though, would be a challenge for many subdivision homeowners with an interest because their homes’ roofs face the wrong direction. 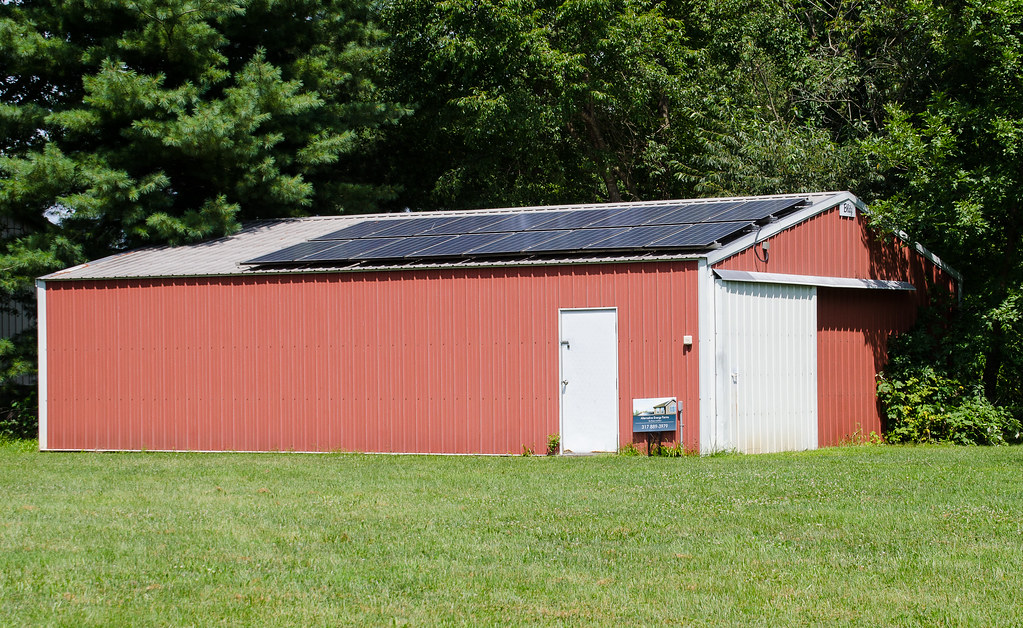 In addition, planning and zoning approvals were required and an agreement with Johnson County REMC (JCREMC) allowing him to hook his system “into the grid.” Planning and zoning presented no barriers, and Brian said that the JCREMC was open and “friendly” to the idea. The REMC had already considered how best to deal with customers wanting to integrate private energy generation with the public grid, so agreements, contracts and costs were ready for use.

Brian embarked on the project in November 2013, but since winter weather is not ideal for doing roof installations and trenching ground for cable runs, he put off implementation until the spring of 2014. Brian completed the installation and began operation June 26, 2014.

Going into the project, Brian had design constraints. It must be priced for a single homeowner, and it would have to be scalable, allowing for future modification and/or expansion. Since JCREMC pays approximately 50 percent of residential customer rates per kilowatt for privately generated power going back into their system, Brian wanted a design that would generate enough power to run his home during the daylight hours without leaving much, if any, power to go back out onto “the grid.”

During darkness hours, his home would draw power from the REMC, just like everyone else. Battery technology currently available does not lend itself to effective storage of daylight-generated energy for nighttime use. If battery technology improves or the pricing structure with the REMC becomes more balanced, he may consider expanding his system and overproduce in the daytime, while using battery-stored energy or a more balanced cost energy from the REMC during darkness hours.

The system Brian installed is a simple system with few points of failure. It includes 16 roof mounted solar panels, current inverter to convert to A/C and a safety cutoff switch to prevent any power generated from his panels from entering the REMC grid if the grid is down. This cutoff switch protects REMC service personnel who may work on lines during an outage from injury from unexpected electricity in the system.

His system is built to generate a theoretical yield of four kilowatts (kW), but the best actual output during the year since installation is 3.6 kW, which is considered a very good result for Indiana. 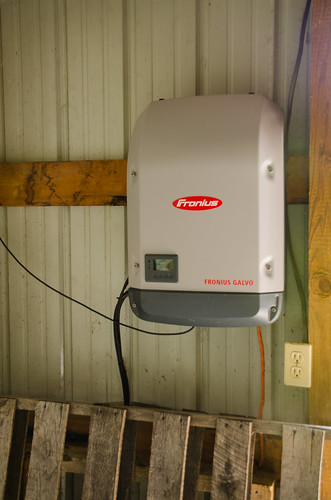 Along with the hardware, his system includes access to online streaming data, allowing him to monitor the system performance which he has been doing during this first year of operation.

So, what does the data say? During his first year, sun availability was not as good as average (last November and December were gray, dreary months), but the system has provided between 20 percent and 25 percent of the Sanders household needs. While he had hoped for 50 percent, Brian acknowledges that he had not considered that daytime and nighttime electricity usage were not equal, so he is very satisfied with the production at this point.

He calculates his annual return on investment to be a little over five percent, a nice return these days. At this rate, Brian believes he will reach a break-even point on his investment in 10-15 years. Manufacturers say his system should last for 25 years, so he is looking at over a decade of free energy.

For anyone considering such an installation before the end of 2016, there is a 30 percent federal income tax credit for the initial investment. As for the system’s environmental payback, during the first year of usage, CO2 emissions have been reduced by the equivalent of 63 trees.

Brian’s plans for solar energy include installation of a set of “tracker” panels, which will rotate from east to west to track the path of the sun during the day. This should yield more hours of high output production, but Brian is waiting to see what the data tells him.

He is also considering how he can help promote solar electric energy in Johnson County and central Indiana. Most solar firms are comprised of engineers without sales and marketing personnel to promote the idea, so Brian believes there may be an opportunity there.

Brian says anyone interested in pursuing solar electric generation for themselves must consider:

Do they have a large south-facing roof without trees obscuring sunlight they will use to mount solar panels? (Many people do not want solar panels on the front roof of their home)

Are they willing to start small? Brian doesn’t recommend trying to become energy independent right off the bat, but rather start small with an expandable system that can grow later to offer total independence.

But as to the answer to Brian’s first question – is solar electric power viable for residential use in Johnson County? … the answer is YES.