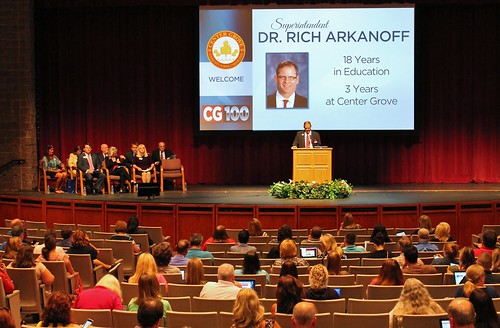 The idea behind this effort is to obtain thoughts from the broadest cross-section of White River Township stakeholders possible, providing input to the school system’s Strategic Planning Committee (SPC). One method to accomplish this is an advisory group called CG100. School officials were hoping to encourage at least 100 individuals from the township – school administrators, teachers, parents, parents of former students, residents without students and business leaders – to participate in sessions to solicit their views on Center Grove Schools. The first of two planned sessions for the CG100 surpassed their expectations. More than 300 area residents attended with around 600 that expressed interest. The time commitment is small — two hours over the course of the school year – but the result is extremely important. The mantra for CG100 is “Two Hours/One Year — Making a Difference for CG Students.”

The first CG100 meeting took place Sept. 9 and school leaders used various methods to promote this meeting. Technologies such as email blasts, website announcements and QR codes were employed, as well as more traditional communication methods such as community posters, flyers and personal contact with known organizations asking them to spread the word.

At the meeting, key school leaders presented on a variety of topics. Then, attendees responded to an electronic survey to collect opinions on various questions posed by school leadership. Technology was key in facilitating the success of this survey. Attendees could use their own mobile devices – smartphones and tablets – to respond or devices were available for use by those who did not have one.

Information from this process was analyzed and shared with the SPC during their meeting Sept. 30. During that meeting, they reviewed the survey data and developed a set of “wonderings,” identifying areas where they “wondered” if certain things could be done or actions taken. One hundred twenty-three of these “wonderings” were identified in 27 categories. These will be used in the December meeting of the SPC to develop and rank goal ideas. 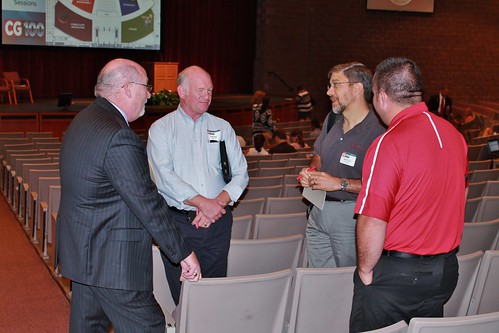 These ranked goal ideas will then be shared with the CG100 group in preparation for their final meeting of the school year, which is planned for Jan. 13, 2015. There, the CG100 advisory group will weigh in, again using surveys, on the goal ideas and ranking produced by the SPC. That will in turn be fed back into the SPC process with a target of having final, measurable goals defined at the final SPC meeting April 21, 2015.

Jack Parker, Assistant Director of Curriculum, Instruction, Assessment and Special Education, indicates Arkanoff wants the strategic planning process to be agenda free and transparent. “People are going to want to know if we are doing something with the information we collected,” said Parker. The answer to that question is a resounding yes, and school officials want to promote public awareness of these activities.
You can find a wealth of information on Strategic Planning 2.0 and the CG100 at centergrove.k12.in.us/cg100.

Fairness in Funding: Why the State’s Formula ...