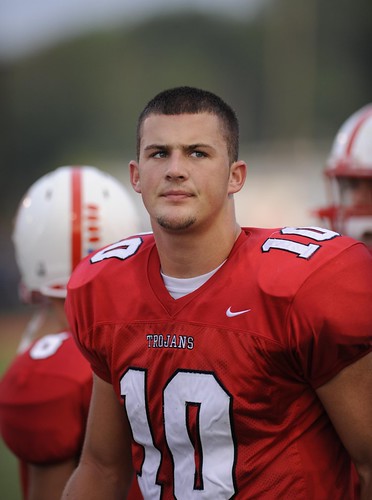 One of Center Grove High School’s most heralded athletes returned to the site where he accomplished one of the most incredible feats of his young 24 years of life. Jordan Luallen was at Lucas Oil Stadium this past Thanksgiving weekend not as a player, but as the assistant strength and conditioning coach for the Washington Redskins. The Redskins were in town to play the Indianapolis Colts.

The last time Luallen graced the sidelines of Lucas Oil Stadium, was Thanksgiving weekend of 2008. He was Center Grove’s senior quarterback, playing in the IHSAA Class 5A State Championship against rival Carmel. Luallen rallied the Trojans from a 19-point deficit in the final six-minutes of the title game to claim the school’s first football state championship, 36-33.

It’s been six years since that miraculous come from behind win. “It was very surreal to return to Lucas Oil Stadium,” Luallen recalls. “My greatest and fondest achievement as an athlete will always be winning the 2008 State Championship. Because I did it with my best friends and coaches that were truly like family to me.”

Leadership Never Quits
Moore remembers Luallen’s words at the pep rally following the championship, “I was really bad in the first half. I’m glad you stuck around.” However, Moore said, “Boy he was good when it counted in the second half. He pretty much put the team on his shoulders and ran with the ball, threw the ball, called the right play and got us in the right situation. We never quit. We weren’t going to be denied. Everyone contributed in the final six minutes.” 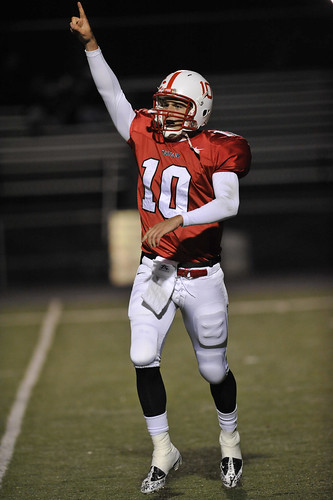 “Jordan is the epitome of a student-athlete,” Moore beamed. “He was a great student in high school and he’s a great competitor. Just great character traits. I’m not sure I’ve had a more well balanced kid at his age and accomplished everything he accomplished by maintaining great character and great work ethic and excellent academics and an excellent athlete. Jordan is the all-time champion of winning I’ve ever been around. He was a winner with compassion. It’s hard to beat a guy like that… that football field was his sanctuary. I don’t think I’ve coached a kid in 35 years that liked football practice as much I do. I think Jordan Luallen enjoyed practice more than me,” said Moore.

“Coach Moore is like a second father to me,” said Luallen. “He put more time and effort in helping develop me than you can imagine. I can’t count the number of hours he spent helping me with my throwing motion, all the way back to fourth grade. One of the greatest influences I’ve ever had in my life.”

Luallen started at quarterback midway through his high school freshman season. “I can remember him throwing his first touchdown pass,” Moore reflected. “I can probably remember more about him as an athlete in my program than anyone else because he shared so much with me. He never left practice without giving me a hug and telling me he loved me.”

Siderewicz was most impressed by Luallen’s competitive spirit. “He gave everyone a feeling that they were going to win. He gave that confidence. Sure, he had the size and good arm. But the first thing I would say he was a competitor. He expected to win every game. We call a quarterback sneak to get a yard or two for a first down. One yard, heck, I’m going to knife through here to see if I can go all the way for a score.”

Moving Ahead
Coming out of high school, Luallen was a four star recruit and rated the number 22 quarterback in the nation by ESPN.com. After graduating from Center Grove in 2009, he received a full ride scholarship to play Division I football at Georgia Tech. Luallen was a redshirt freshman before transferring to Cincinnati to play for the Bearcats his sophomore, junior and senior seasons. He played several positions at UC which included: quarterback, wide receiver, linebacker, halfback, fullback and special teams. He earned an undergraduate degree in entrepreneurship and a master’s in health promotion and exercise management. 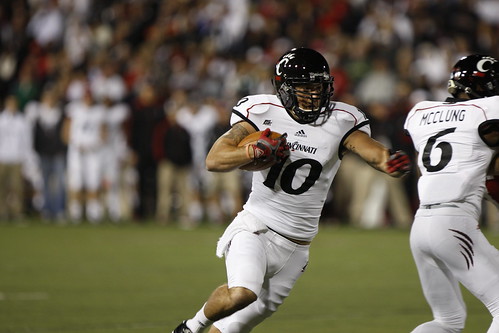 Luallen has been with the Redskins coaching staff as a paid intern since this past March. Redskins’ Head Strength and Conditioning Coach Ray Wright says, “I’ve been using interns for seven years now – probably have had over 20 interns. He’s the best intern we’ve had. He’s smart, gets along with guys well and understands work ethic.”

Luallen’s father, Bill Luallen, believes his strength is his ability to identify with everyone in the Redskins organization whether it’s administration, players or coaches. “He can lift side by side with Ryan Kerrigan (Redskins linebacker) or he do agility drills side by side with RG3 (Robert Griffin, III, Redskins quarterback),” said his father. “Since training camp, Jordan has also been the scout quarterback for the Redskins in practice. They couldn’t find anyone else so Coach Gruden said you can throw better than anyone else.”

Luallen’s father was his youth football coach and has always been his number one fan. His voice choked up when he spoke about his dad. “He’s my rock. He pushed me and always helped me keep my eye on the prize no matter what happened. He made me keep grinding. He always stayed on me to make sure I was the best I could be in all aspects of my life. I am who I am today 100 percent because of my dad.”

Luallen says he’s where he is because of the impact of coach Moore, coach Siderewicz and all those coaches had on his life. “Because I saw how they poured their time and resources into me and helped develop me to be the best I could be,” said Luallen. “I just wanted to give back and do the same thing they did for me. I thought what a better way to do that than to be a strength coach. No matter what level I’m at that’s what my passion has grown to be. Whatever level I’m at, I have a very significant time with athletes and help grow them to be men and install values but also help them to be the best athletes they can be. So I take a lot from Center Grove football. It’s helped me become the man I am today.”

The Yoga Studio Sets Their Intentions for ...