Claybridge Farm & Riding Academy: Back in the Saddle

The white plank fences, iron gates and stately stone entrance at Claybridge Farm & Riding Academy may look like they belong in the rolling hills of our bluegrass state neighbor, but the award-winning equestrian facility just north of where Fairview and Peterman roads meet is only 10 minutes south of downtown Indianapolis.

A LITTLE BIT OF HISTORY
Like many little girls, Claybridge director Autumn Harrier grew up loving horses. Her father, Dennis Hunt, enabled his daughter’s relationship with horses on a small farm in Muncie and remembered, “Some girls play with dolls. Autumn always played with horses.”

Her entrance to the world of equestrian sport started with quarter horses owned by her parents and grandfather. But after Hunt met American saddlebred trainer Jim Aikman, owner of Hide-A-Way Farms in Acton, Harrier began riding and competing on American saddlebreds at age 11. The family moved to Johnson County in 1990 and set up Claybridge where Harrier trained in saddle-seat.

She competed in hundreds of competitions, including the World’s Championship Horse Show in Louisville, Ky., where she won the national championship and was a reserve world champion. She began working with outside clients at Claybridge in 2007 and trained and coached riders to the top 10 in national finals.

The saddlebred is naturally gaited with a showy but smooth and precise high-stepping trot. The modern saddlebred was developed in Kentucky in the 1800s and was often used as an officer’s mount during the Civil War. They can look rather imposing at first glance — most are at 15 to 17 hands, or 60 to 68 inches, tall — and they’re often referred to as the “peacock of the horse world,” thanks to their long necks and slender, well-shaped heads.
But they’re also known for their good nature, Harrier says. “They’re like puppy dogs — very people-oriented, and they like to please. They’re like Golden Retrievers.”

Harrier moved to Kauai, Hawaii, almost five years ago due to her husband’s job, and she began a new venture. After talking with a friend about the difficulty in finding riding pants that fit just right, she launched Alympic Equestrian, a line of jodhpurs and breeches, in 2014. She still manages the farm’s business operations and returns to Claybridge several times a year where trainer/instructor Sarah Wuensch now presides over training and riding lessons. 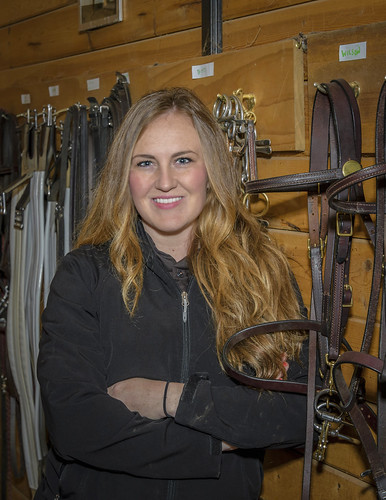 Wuensch started riding after her grandfather bought her a horse when she was 2. “I caught the horse bug really, really early,” she laughed. She teaches 35 to 45 lessons per week, mostly to girls ages 6-19. A good number of the students invest in lessons and training with the intent to compete, though showing is purely optional.

Wuensch usually takes eight to 10 students with her to a show each month where they compete against other barns in different divisions. The horses are also judged on performance, manners, presence, quality and conformation. “Competition is its own little world,” said Wuensch. “All these people know each other.”

Once in the show ring, riders show how they can move their horse into a trot, canter or reverse. “They’re showing how the horse is moving, and the judges are looking at the overall picture of a pleasurable horse to ride,” she explained. Students may show their lesson horse from Claybridge or their own, though owning a horse is not necessary in learning to ride or compete.

A LOOK INSIDE THE BARN
The spacious barn at Claybridge holds 27 stalls, all of which are almost always filled. Harrier and Hunt own around 10 horses, a few are simply boarded and four — Jux, MC, Kiss and Indigo — are Wuensch’s. One or two horses are retired, others are client-owned and kept at Claybridge for lessons and some are there for Wuensch to break and make them safe to ride.

Other horses Wuensch trains alone and lays the groundwork for them to be competition material for owners who live elsewhere. During sunny weather, Wuensch gives riding lessons in the outdoor arena, while lessons during cold weather take place in the large arena in the middle of the barn.

Wuensch says she stays plenty busy at Claybridge. After training horses in the morning, she gives lessons six days a week.
And because most clients are in school, lessons are typically later in the day from 3-7 p.m. A competition in Michigan recently had her traveling on a weeknight and returning four days later, highlighting the time and dedication competing can take.

But Claybridge is also a haven for those who simply want to turn riding one of the world’s most prominent and prettiest breeds into a hobby. The wall outside the tack room is filled with photos of smiling 6-year-olds and teens holding blue ribbons with their lesson horses, but they’re not the only ones who love walking into the barn and rubbing those oh-so-soft noses before getting in the saddle and flying across the soft dirt, says Hunt. “We have 70- and 80-year-old women who have learning to ride on their bucket list.”