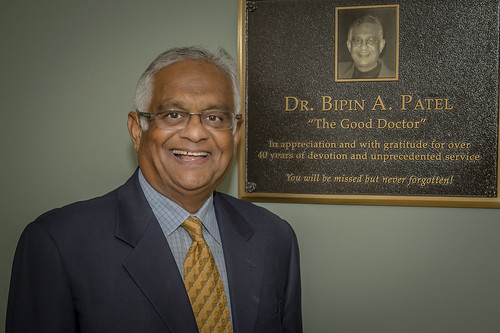 It has been two months since Dr. Bipin Patel hung up his medical coat and celebrated his retirement, but returning to the halls of Community Surgery Center South was nothing short of a homecoming with handshakes and hugs all around. Dr. Patel focused on patients, the medical staff and providing outstanding professionalism.

“Bipin Patel’s reputation as a physician and anesthesiologist is unblemished and impeccable,” Bryan Mills, President and CEO of Community Health Network, said. “His fingers were in everything.”

That is why the surgery center at Community Hospital has been a success – his fingers were in it from the beginning.

The surgery center was once the grassroots effort of Patel and a few practicing physicians. It has since grown into a well-oiled arm of the main hospital.

Patel explains that the outpatient surgery center is connected to the main hospital by a corridor so that surgeries and emergencies can be taken care of seamlessly and efficiently. The building has 36 rooms, but room numbers go to 37 and – they skipped 13 for superstitious reasons.

His office was located on the second floor, and the mural on the wall was painted in memorial to his daughter who passed away in 2007. A plaque with his photo hangs outside the hallway patients enter to go back to their rooms.

38 Years, 40,000 Patients
After 38 years as Medical Director and Head of Anesthesia at Community Hospital South, he walks the halls as if he never left and it is obvious that he never will. His legacy will live through his 40,000 patients, fellow doctors and even more hospital renovations in years to come. Dr. Patel is one of the surgery center’s original founding partners, and up until June 30, was one of two original practicing physicians. 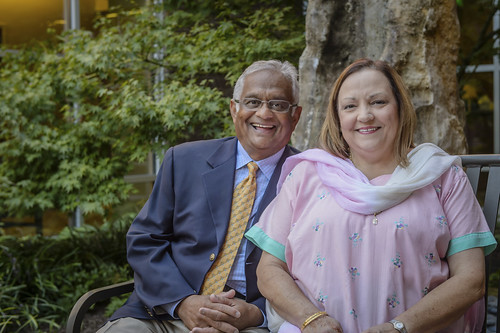 His story begins in Nimbi, Kenya where his father suggested he become a doctor. Patel’s family is from India, but he was born in Africa. They lived modestly, but believed strongly in education. A young Patel received his high school diploma through Cambridge University and went on to study internal medicine in Bombay, India. He completed training in India, and moved to the United States in 1970.

He said it was a “tossup” between moving to England or the U.S. “Within the first month, I realized I made the right choice,” he said.

He visited the Social Security office, a car dealer, and convenience store and was impressed with the honesty and integrity of each person that handled his transactions. The Social Security clerk gave him advice as a newcomer. The car dealer sold him a car below sticker price despite the fact that Patel was ready to pay full price. And the convenience store clerk explained that it is more economical to buy groceries at a grocery store.

He said he found honesty, integrity, prosperity and hard work in his early days in the United States, and he has carried those with him throughout his life. “If I give you something; I’ll give you the best,” Patel said.

In 1971, he entered into his residency at IU Medical Center. It was there he decided to specialize in anesthesia. “[Anesthesiologists] deal with every surgical aspect of medicine – general, orthopedics, cranium…” Patel said.

Although he acknowledged that there were difficult days during his practice, he barely touches on those. Ninety-nine percent of the time, he said, things went smoothly and surgeries were quiet and uneventful. He attributes that to the years of schooling and daily experiences each surgeon receives. At Community Hospital South, surgeons perform approximately 15,000 surgeries a year – five times as many as when the surgery center opened in 1987 with two doctors. In fact, surgery is where bonds are formed between doctors, nurses, and staff. It is where they share their work and their lives, Patel said.

Years of Fast Growth
With so much growth, Dr. Patel credits both the doctors and the business partners at Community Health Network. Just as Patel has grown as a doctor, so has the hospital he is so proud to be associated with. He started practicing when Community Hospital was still University Heights on Carson and Sumner Avenues. It later moved to County Line Road in 1982, when, he recalls that there was only one stoplight on County Line Road and Greenwood Park Mall wasn’t enclosed. During that time, Dr. Patel saw a need for a surgery center on campus. He and a few fellow physicians invested in and oversaw the completion of the hospital’s surgery center.

“The surgery center was important because it was the efficient way to work,” Patel said. “Time is valuable.”

He noted that even normally simple and routine outpatient surgeries have times when a patient has an unknown sickness or symptom that causes complications. Having a surgery center and hospital on the same campus saves valuable time.

As the hospital settled in, Community Health Network took interest and acquired the campus in 1989. It was then that the surgery center’s founding doctors turned over the business. Patel said they were happy to turn over the business side and focus entirely on medicine, but his involvement never waned. “For the surgery center to succeed, they have to have doctors and surgeons involved,” he said.

Mills, who later developed a personal friendship with Patel, said that the minute the transaction was settled, it was obvious Patel was working for a common cause and not the value of the transaction.

For Mills and the other medical staff, seeing Dr. Patel retire was bittersweet. “He was a leader and an advocate for patient care,” Executive Director of Community Surgery Center South Mark Walke said. He showed his entire staff respect and “didn’t want anyone to feel like it was a job.”

The hospital will reflect Dr. Patel’s way for years to come. During a retirement party at the Indiana Roof Ballroom, he was presented with a street sign. “Bipin Way” will take place of “Health Care Drive,” the main drive through the campus. The street, which runs like the “spine” of the campus, will not only reflect Patel’s practice, but also his passion and his work ethic. “Bipin Way is not just a surgical way,” Walke said, “it’s a way of life.” 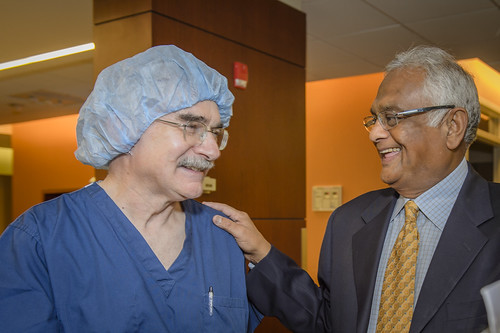 Dr. Bipin Patel has been a Greenwood resident since he moved to the United States. He and his wife, Holly, have been married for 27 years. The two met at the hospital, where Holly was a surgical nurse. She said that even before they shared their first date, she knew he was an amazing doctor.

“If you’re in his care, nothing is going to go wrong,” she said.

The couple has two adult sons, Rahul “Monish” and Neil, and a daughter, Priya, who passed away in 2007. They also have a six-month-old grandson named Hayden.