Edwina “Edie” Caito is no stranger to the Center Grove area. She has been near here all of her life. Graduating from Perry Meridian High School in 1983, she moved to Center Grove in 1999. Edie has a unique and inspiring story. Rearing three children — two girls and one boy — has given her the opportunity to shine in her role as a mother. So much so that she is this year’s Center Grove Mom of the Year.

A mom is the woman who unconditionally loves you from birth, who puts others’ needs before her own and the one you can count on above everyone else. This definition fits Edie very well.

Nominated by her youngest daughter, Michaela, who is a senior at Center Grove High School, Edie is described as generous, loving, accepting, encouraging, inspiring and extremely devoted to her family and her community. 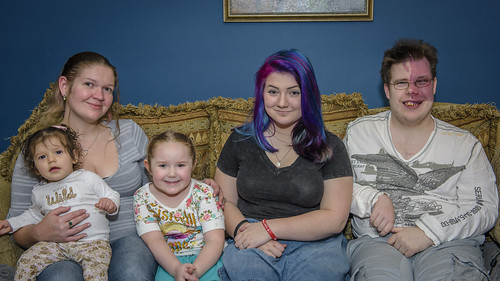 UNCONDITIONAL LOVE OF FAMILY
Edie’s three children are a huge part of her life. All three live in the Smith Valley area. Edie’s oldest daughter, Chera, is 34 and mother to Edie’s two grandchildren with a third due this July. Her middle child, Dennis, is 29. He lives at home due to living with Sturge-Weber Syndrome, a disorder characterized by neurological abnormalities and seizures. Her youngest daughter, Michaela, 18, will be graduating in June and plans to pursue a degree in computer programming and website design. Edie’s involvement with her children includes an open door policy where their friends can come to her for whatever they need. Many of them call her “Mom” or “Mom Two.”

When her son Dennis was six weeks old, he had his first seizure. After eight years of suffering from uncontrollable seizures, the family was able to get him into the Cleveland Clinic in Ohio. This clinic is top-rated in this region for neurosurgery. After rounds of testing and research, doctors at the Cleveland Clinic performed a hemispherectomy, a surgical procedure where half of the brain is removed or disabled. The previous eight years of seizures had damaged his brain, but the surgery substantially helped control them. Dennis went on to receive a general high school diploma from Center Grove High School.

FOUNDING INDEPENDENCE PARK
While in high school, Dennis had no good options when it came to a place to hang out with other special needs students and friends. Edie took note and began a quest to build a park for children and families with special needs to gather.

After being inspired by a mother in another state and by the needs of her own son, Edie saw a story in the Daily Journal about land in 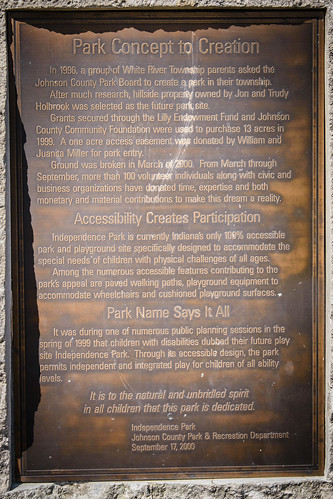 White River Township becoming available for a park. She worked tirelessly to secure grants and fundraisers (as well as receive some donations from Toys R Us and Ray Skillman), and on September 17, 2000, she founded and opened Independence Park — Center Grove’s first park designed with equipment for people with disabilities.

Edie explained, “This park was a community effort and truly a dream come true for me and my family.” Edie is proud of the fact that this effort brought awareness to special needs in the Center Grove community. To this day, Edie and her family spend a lot of time at Independence Park.

Edie earned a certificate from the Institute of Children’s Literature in 1996. She has always enjoyed reading and writing. She is a nonfiction-published author (“Indiana Bigfoot: The Beautiful Mind,” CreateSpace Independent Publishing Platform, 2015) and has two other books she is currently writing. She loves to camp and hike at Morgan-Monroe State Forest, maintains a garden — one that is full of plants native to Indiana — and enjoys everything outdoors.

All three of Edie’s children also have a love for nature and all things outdoors. Her appreciation for ’80s music is something she also shares with her children, including Def Leppard, KISS and Styx. She considers herself to be very domestic and enjoys cooking and baking. She was bitten by the travel bug and loves to go all over the U.S., particularly Sunny Isles, Florida, where she has visited with both of her girls on mother-daughter trips. Her favorite Center Grove spot is Hampton’s Market which she frequents to treat herself to their tenderloin and other housemade specialties.

OTHERS’ NEEDS BEFORE HER OWN
The Caito family also holds a special appeal within the paranormal community. They work together as a team, and in 2009, they created Helping Hand Paranormal Investigations of Central Indiana (HHPI). This company uses a scientific approach to any paranormal activity while helping clients when their families feel they have nowhere else to turn.

In 2007, Edie started to feel achy. After two years of this progressing feeling and tests with no clear 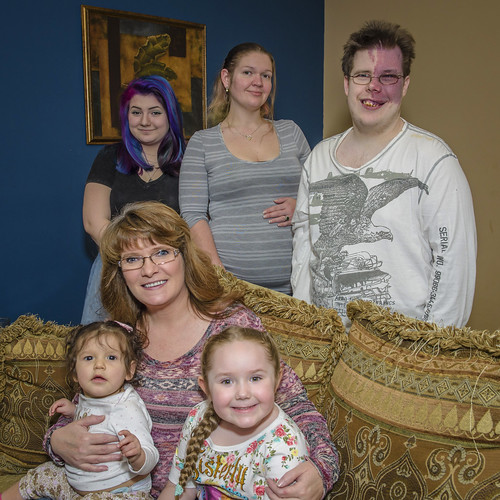 answers, Edie was diagnosed in 2009 with fibromyalgia. She explains this disease as “waking up with the flu and never getting better” and “having your skin feel like it is sunburnt with no relief.” Edie pushes herself every day — some days in excruciating pain — in an effort to take care of her family.

She explains that her new normal is learning how to set personal boundaries on a daily basis. She is thankful that fibromyalgia is now recognized as a disease. Even though her body responds differently to doing the things she loves, she continues to live life to the fullest.

Edie is compassionate about helping others with fibromyalgia. She is a member of several Facebook groups that support the fibromyalgia community. She is also passionate about lobbying for legalizing the medical use of cannabis in Indiana. Currently, medical use is legal in 23 states. She is also working to help to amend Indiana’s tight opiate control law to exclude those with chronic pain conditions for which there is no cure.

Thank you, Ms. Caito, for your generous contributions to the Center Grove community and the example you show to many in caring for your children. Moms will always hold a special place in our hearts, and this month especially, we will join Chera, Dennis and Michaela in celebrating you!

Achieving Greatness Beyond the Classroom