El Camino: The Way to Gratitude and Jubilation 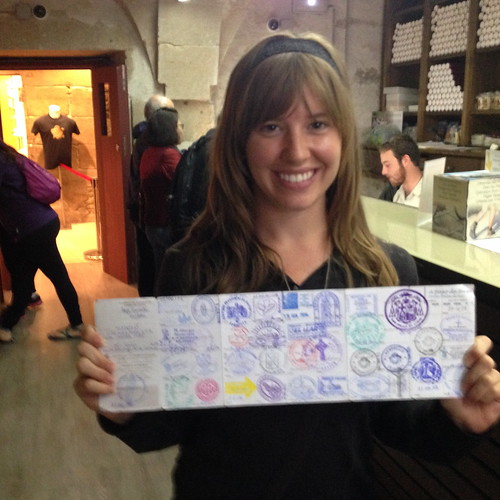 “The shell represented a reminder of the promise I made to myself,” Paige Vandoski said. “A promise to return to Spain one day and walk the Camino.”

Nestled near the Atlantic Ocean in the northwest corner of Spain lies a city named El Camino de Santiago, meaning the Way of St. James. In her junior year at Ball State University, Paige visited the city while studying abroad. She found the city to be rooted in rich heritage and legend. For more than 1,000 years, pilgrims walked to Santiago in search of the city’s Cathedral of Santiago de Compostela. Legend says the  body of Catholic saint, James, one of the Twelve Apostles of Jesus Christ, lies in this Cathedral. Here, pilgrims believed their walk could result in a plenary indulgence, which freed a person from the penance due for sins. Throughout the medieval period, Santiago joined Jerusalem and Rome as the three most important pilgrimages.

During the old Camino journeys, pilgrims used scalloped shells, abundant in this Galatian region, as a cup to quench their thirst. Today, the shell stands as one of the symbols of the pilgrim’s Camino walk and displayed on backpacks or necklaces. During the visit to Santiago, Paige obtained a scalloped shell.

After graduation, Paige returned to Spain as an assistant teacher in English and continued to plan for a future Camino for herself. In her research, she found there to be no statistic on the number of travelers in ancient days, but more than 216,000 pilgrims experience the Camino each year. Their reasons for the walk spanned from sport interests to religion to historical conquests.

While the journey of pilgrims in the past began on their home’s doorstep, only a few walk the roundtrip to and from their homes. The modern day pilgrim can elect to start his or her pilgrimage in any arbitrary location. Backpacking with a document called a credential, Spain offers the pilgrims access to free or cheap accommodations and food. As proof the pilgrim completed the route to the end, nightly locales stamp the credential.

Paige also discovered one particular legend remains. The pilgrims of old carried a rock to represent the burden of their sins and left it at the foot of the Cruce de Ferro, the iron cross.

Some suggest the Cruce de Ferro completes the Meseta portion of the Camino, the section known for one’s introspection and reflection. By the end of the Meseta, a pilgrim desires to culminate their recent walk with an act of leaving a stone there. The act prepares the pilgrim for the final phase of the walk—the joyful approach to Santiago.

Carrying a backpack no heavier than 20 percent of her body weight, Paige added her footsteps to the pulse of a thousand other footfalls on El Camino de Santiago in early June 2014. Starting just west of the Pyrenees Mountains in Santo Domingo de la Calzada, located near the borders of Spain and France, “I didn’t know that my Camino, my adventure, would turn into a journey with a deeper meaning,” Paige humbly said.

As she held her shell and a rock in hand, Paige realized each pilgrim did indeed struggle with a burden on the Camino. She recalled a young couple with a small child, for example, who sold everything they had to come walk on the Camino and find their purpose in life. At the end of the journey, Paige saw the couple in a deep conversation with a man from India. She hopes the young family found their purpose. 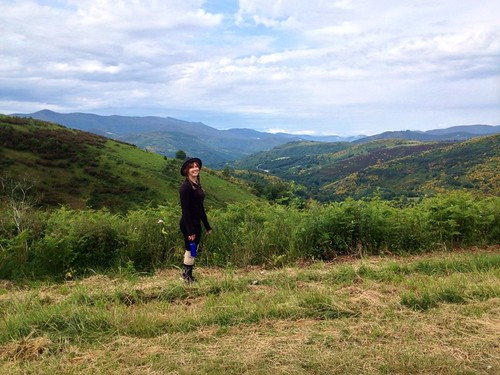 Paige, herself, struggled with her Camino in a different way. After years of gymnastics, Paige found her knees and joints screamed to stop her grueling goal of 15 to 18 miles a day, but Paige persevered. According to Paige, the pilgrims set their own daily timetable and destination, enhancing each traveler’s knowledge and appreciation of their surroundings. For her, the way seemed easier and more relaxing when rising with the sun and completing her daily Camino before the heat of the afternoon sun.

The slow march of stone villages strolling by at a pilgrim’s pace, reawakened Paige’s senses on the trail, creating attention to some of the smallest of details. “It may sound silly, but I came upon a golden field, dotted with red poppies, and the scene created thankfulness in my heart. I loved the smell of the poppies boarding the fields.”

Along the way, Paige observed her environment and the people traveling around her. She commented, “You meet people in your Camino, and you feel a connection with them. They are not strangers. You learn from them and care about them. I met a man from India who I walked with for a while. He had made tons of little fabric hearts before coming to the Camino. He gave these tokens out to everyone saying something sweet like, ‘I give you my heart.’”

As each day faded with the sunset, Paige pondered where to stop and rest for the night. In the next village? In a hotel or small albergue (hostel) enjoying a dinner of local food and nice company? Or, perhaps sleeping under the stars? Using her Camino credential, Paige most often opted to stay in an albergue, a dormitory-like structure lined with bunk beds built just for the pilgrims. “I learned careful consideration should always be taken in choosing a bunk,” Paige said, giggling. “You learn very quickly to stay as far away from the snorers as possible.”

Feeling in tune with the earth’s breath, Paige recalled coming around a bend of trees and gasping at the overwhelming power of the scene in front of her. One-by-one pilgrims stood still, maybe praying, and then gently tossing their rock, their burden, toward the foot of the Cruz de Ferro.

“The cities grew to be a problem for me and the other pilgrims. We walked for weeks with just the sound of nature and easy talk, observing the world at a slower, relaxed pace with minimal, if any, access to the Internet or iPhones,” Paige remembered. “The pilgrims become time warped, which is not a bad thing. Just stressful to be thrown back into the speed in which our world lives.”

Reaching Santiago, Paige applied for the compostela, a certificate of completion. She found out when she returned home, any compostela penned in Latin meant the pilgrims walked the Camino for spiritual or religious reasons, while the Spanish document meant other reasons captured the interest of the pilgrim.

For the weary pilgrims reaching the final destination in their journey, gratitude and jubilation abounded. “As you step inside the Cathedral of Santiago de Compostela, immediately in front of you is the Door of Glory and within reach rises the statue of St. James. We read the statue’s worn look came from the many pilgrims who reached out, gratefully touching and kissing it at their journey’s end.”

Best Buddies Citizens – The Next Chapter