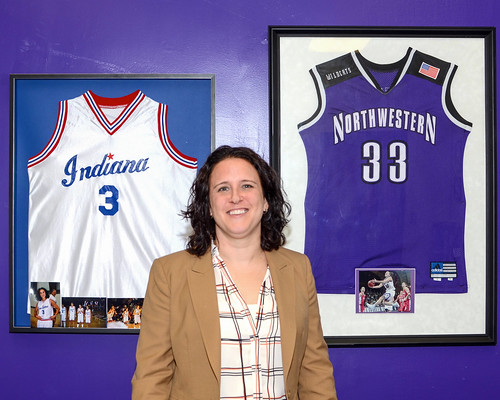 Butler, now in her second year as principal at Indianapolis Public School’s Washington High School, remembers the day when Billy taught a 6-year-old Emily to shoot a layup. After he left, she stayed on the court until she made 100 layups. Through the years, Butler’s focus and drive have served her well, including, when as an eighth-grader, she set the goal of making Center Grove High School’s (CGHS) varsity team as a freshman.

The following year, February 24, 1996, to be exact, Butler started as a freshman for the CGHS basketball team when they defeated Valparaiso, 55-44, for the IHSAA Girls’ State Championship. Ironically, basketball wasn’t even her primary sport. Butler spent most of her time playing soccer and even some tennis. Those sports were for fun, but basketball was “more about striving to be excellent,” said Butler.

Her efforts earned her a full basketball scholarship in 1999 to Northwestern University. “Sports have taught me many things. For what I do now as principal, it would be having a big goal and recognizing and capitalizing on every opportunity that will get us there.”

Influential Experiences
Majoring in Social Policy and English at Northwestern, Butler wanted to work in a field that made a difference in people’s lives. Because Butler had grown up watching her mother Bev teach elementary school students for 32 years, the idea of education appealed to her. “I tinkered around with both social work and teaching. I wanted to help people,” said Butler.

When she heard Teach For America’s founder Wendy Kopp explain public school inequity, Butler resonated with their mission for high-poverty schools. Kopp emphasized how more leaders needed to make it their life’s work and be grounded at the classroom level. Butler noted several younger CGHS graduates who joined Teach For America after college including Justin VanAlstyne, Brandon Brown, Nick Perry and Emily Masengale, the latter two both serving as Indianapolis principals.

After graduating from Northwestern in 2003, Butler committed to Teach For America for two years and began her education career at Patterson High School in Baltimore, Maryland. Roger Wrenn, whom she fondly calls her “Baltimore Dad,” didn’t hesitate to hire her. “I met Emily at a Baltimore job fair and was instantly struck by her idealism, energy, intelligence and her pragmatic approach to problem-solving,” said Wrenn.

Butler taught freshman English and coached girls basketball at Patterson, which was one of Maryland’s first schools to be taken over by the state. Rich in cultural diversity with its 1,100 students, Patterson, located in Baltimore’s southeastern Hopkins-Bayview neighborhood, provided a great beginning for Butler’s understanding of schools needing strong leadership.

“Emily’s successful methodology learned in athletics carried over into the classroom. She always wanted to teach at a ‘hard-knocks-kind-of’ school. Emily says the best thing she learned from me was to tell students something important at least three times,” said Wrenn, who also encouraged Emily to get her principal’s license from John Hopkins University. Before returning to Indiana, she was an assistant principal at several Baltimore City high schools similar to Patterson. 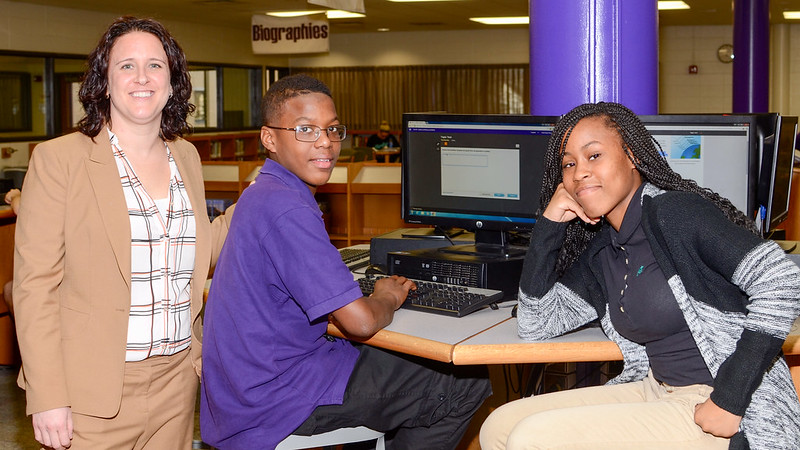 Cultivating Strong Leadership
Her 12 years in Baltimore also included a 2006 internship with Mayor Martin O’Malley, during which she learned how Baltimore actively acknowledged and creatively dealt with their problems. “Baltimore is a tough place; children and those living in poverty overcome a lot from challenges with transportation, healthcare, hunger, violence and housing. A recent study showed that Baltimore’s children grow up in worse living conditions than kids in Nigeria,” said Butler. She notes that the creative approaches implemented by the city and school system to address challenges was a great environment in which to begin her career and learn.

Butler returned to Indiana in 2014 to become Washington High School’s sixth principal in five years. Her first year concentrated on improving the school’s climate and establishing a clear vision for the approximately 650 students who attend this near Westside school, comprised of grades 7-12.

During summers, Butler is continuing her education at Columbia University Teachers College in New York through the Indianapolis Principal Fellowship, which fully funds an M.Ed. in organization and leadership. “I love being a principal. I’ve recruited great people who are similarly passionate about turning around schools. I believe any school can be a great school with great leadership,” said Butler.

Eli Lilly partners recently donated 39 banners valued at more than $25,000 throughout the building. Her father and his friends helped install them. “These signs all speak to values we want to instill in students and staff. My job as principal is to leverage adults and change our students’ lives through education.”