Love develops in unexpected ways, as one Johnson County mother and daughter are discovering. Kelly Lynn and her six-year-old daughter Ruby didn’t realize three years ago that Jacob, a thirty-inch miniature horse, would change their lives and cultivate a shared passion for participating in horse competitions. With her mother by her side, Ruby, now starting her first year in Johnson County’s Hoofprints 4-H Club (hphoofprints.weebly.com), will compete in Ponies of America’s (POA) July nationals in Tulsa, Oklahoma.

While Jacob, a silver horse with a striking white mane and tail, won’t be in Tulsa with Kelly and her daughter, he was the catalyst for Ruby to show horses. When Ruby was three years old, Jacob captivated Kelly at a miniature horse show. Since his price tag exceeded their budget, they passed. But seven months later, the owner called from Ohio, remembering Kelly and Ruby, and offered to give them the stunning miniature because she wanted him to be around children. Ruby embraced the responsibility and often says, “I just want to braid Jacob’s tail and love on him. He’s my best boy.”

After two years of showing Jacob in-hand on the ground, Ruby began riding under the instruction of Amy Robinson and her 13-year-old daughter Alexis at Star Stables in Indianapolis. Alexis’ 54-inch pony Casper soon became Ruby’s companion in competition. Even though Kelly could have taught her daughter to ride, she wanted “to be her supporter and encourager rather than her coach in order to keep the ‘mom role’ intact.” 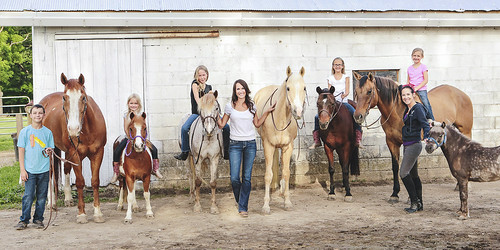 Kelly believes leasing a horse is a great way for people to decide if they want to eventually own one. “It gives people a good opportunity to see if they have the financial resources and time to own a horse. Owning a horse is not a hobby but a lifestyle,” said Kelly.

Equestrian Legacy
Living on four acres near Needham in Clark Township, the Lynns keep nine horses, including four they own, in a 100-year-old barn originally built on a farm dating back to the 1890s. Callie, Kelly’s retired Quarter Horse and Bo, another longtime, family-owned Quarter Horse, provide companionship for Ruby’s Jacob. Kelly’s three nieces, her sister Kya Coryell and her mother Jayne Mullendore, also keep their horses there.

Three generations of their family have grown up loving horses. During her childhood, Kelly’s mother had a backyard horse but wasn’t able to take riding lessons, so she got hurt quite a bit. Consequently she wanted her daughters Kelly and Kya to know how to ride well. Both daughters completed the full ten years in 4-H and took lessons at Star Stables.

Not only has Kelly’s family bonded through loving horses, but also most of her friendships and even her profession have developed through their equestrian lifestyle. While at Ball State University (BSU) pursuing a degree in graphic design, Kelly participated in collegiate competitions. She and her BSU friends would travel to other colleges, draw the number of the horse, and ride it during competitions. Now two of those friends live five minutes away in Fairland. “Horse friends tend to be very loyal and very close,” said Kelly.

Not only does horse ownership provide opportunities to develop friendships, it also fosters responsibility. Kelly noted, “For every hour that we’re riding, there’s ten hours of grunt work, like feeding, cleaning the stable and making sure the horse has water.” 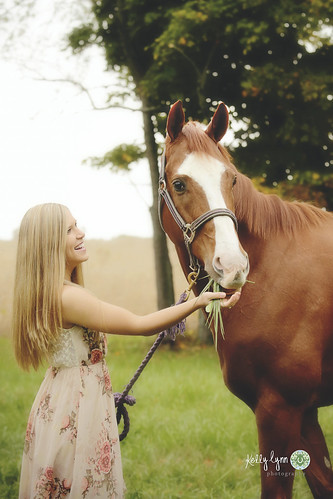 Kelly’s passion for horses has merged into her photography career that before was simply a hobby. She loves taking portraits, especially high school senior pictures. When these are combined with horses, it’s pure joy for Kelly. “If it’s not a portrait, I don’t want to take it. And I love capturing the horse’s personality like you would in taking a human portrait.” (KellyLynnPhotography.com)

“To photograph horses well, you have to know horses, and no two horses are the same,” said Kelly, whose knowledge of the breeds and their uses helps during the typical 45-minute photo shoot. Also important is selecting the ideal time of day for the time of year. “In capturing the moment, it’s magical when it all falls together.”

Many of Kelly’s clients are from surrounding states, but she has a growing local customer base. “I’ve been very blessed that my business is established. Sometimes it comes in waves,” said Kelly. Often her clients are high school seniors who want photos taken with their horses. Her work is multi-faceted. “I like to tell people that I work with kids, animals and the weather, so I’m definitely not a control freak.”

Equine Competition
When Ruby competes in the POA Nationals this month, most people watching in Tulsa, Oklahoma, won’t know the challenges this six-year-old has faced. Few will understand she has overcome a medical condition—vascular malformation—that once had her in a wheelchair. When Ruby competes, she wears a compression garment on her right leg. “She’s a spunky kid who has to work harder but loves it,” said Kelly.

Working hard includes competing in both 4-H and POA, the latter offering more classes for young kids than any other breed organization. Ruby competes in showmanship, which includes ground, Western, English, Trail and Speed events. These require her to communicate well with her pony, especially in events like Trail, that involves an obstacle course, and Contesting Speed, that includes barrel racing. In costume class competition, both the kids and ponies can dress up. Ruby once outfitted Casper like a ballerina with a pink tutu and ballet slippers adorning his hoofs.

Because Ruby competes in the under-six division, Kelly holds onto her pony for safety, typically called leadline. Yet she would rather lose than have her mother help cue Casper. “Not every six-year-old can handle that level of competition, but Ruby seems to have the right attitude about it.”

Competitions for horse enthusiasts are plentiful in Central Indiana. Ruby and Casper competed in the POA-sponsored Eastern Classic, held the end of May in Cloverdale. Johnson County’s 4-H Horse and Pony Club, called Hoofprints, helps kids prepare for these competitions. Center Grove-area resident Melissa Veenhuizen, currently club vice president, explained, “We offer a number of clinics and workshops for youth who own or lease a horse. These are taught by experienced adults from a variety of disciplines.”

Preparation for Trail includes maneuvering horses through a series of obstacles, like walking over a bridge, side passing, opening a rope gate, riding up to a mailbox and opening it, and backing up the horse. Kids can show horses in-hand, which simply means leading them. These classes are judged by how well the routine is arranged. In Showmanship, the youth will execute a pattern with the horse. “During these, the guys dress in sport jackets and ties and the girls dress in bling,” said Melissa.

All three of the Veenhuizen children, Katie, Ben, and Deklin, completed 10 years of 4-H, the largest youth organization in the United States. In fact, Ben, now 23 years old, met his future wife, Amanda, during a Hippology class in 2007. Following his mother’s example, he currently serves as a 4-H leader. “Our kids were involved and given opportunities to observe and articulate their observations in activities like horse judging, public speaking, and demonstrations. Being involved in 4-H is wonderful for teaching responsibility and life skills. It gives them poise and confidence,” said Melissa. 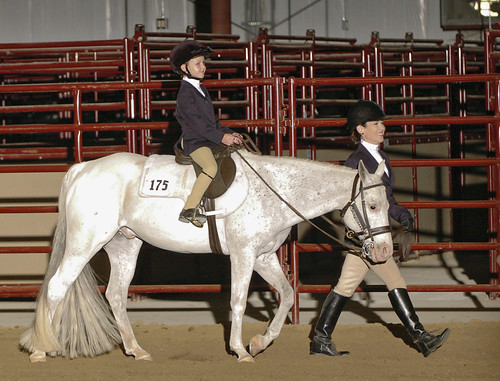 Another Center Grove family, Vaughn and Veronica Sebree and their three children, Abi, David, and DeAnn, are very active in Johnson County’s 4-H. While the family owns six horses, Abi, who has completed 10 years, enjoys her two horses: Tuxedo shows in Performance, and Diesel competes in speed and rodeo-style. Abi’s affinity for horses began early. “I rode my first horse on my first birthday.”

The Sebrees’ love for horses spans generations with Veronica participating in open shows and DeAnn, her youngest daughter, now beginning to show. They keep busy competing as Abi showed her horses every weekend in June. “I’ve learned a lot of time management and leadership skills while participating in Hoofprints and horse shows. In general, 4-H teaches you to develop people skills,” said Abi.

Center Grove’s Bridget and Brielle Tilson, clients of Kelly Lynn, also share the mother-daughter bond of loving horses. “It’s been really good. I rode in my 20s and started taking lessons, but when I became pregnant with Brielle, I gave those up. Being busy raising four daughters kept me from resuming until Brielle at 15 decided she wanted a horse. We’ve become equal partners in caring for Buddy.”

As many local families know, loving horses can become a lifestyle.

Paddle Board Fun on the White River