Poverty is nothing new to Haiti. For decades, the nation that occupies nearly half of the Caribbean island of Hispaniola has been a target for mission groups, both religious and secular, to try and lift the people in Haiti up out of poverty. But January 12, 2010, at 4:53 in the afternoon, the Haitians world was turned upside down.

At that time, a magnitude 7.0 earthquake devastated the southern part of the country, killing hundreds of thousands of residents (estimates range from 100,000 to over 300,000) and turning the lives of over three million people into turbulent chaos.

In the six years since the earthquake, much has been done to rebuild and improve the plight of the Haitian people. Thousands from around the world have pitched in with money, resources and their own labor. In fact, many from Johnson County have been involved in aid efforts to date. But much work still remains. Two Johnson County organizations are involved in the fight to improve the lives of the Haitian people. One is established with more than seven years under their belt. The other is still in its infancy. 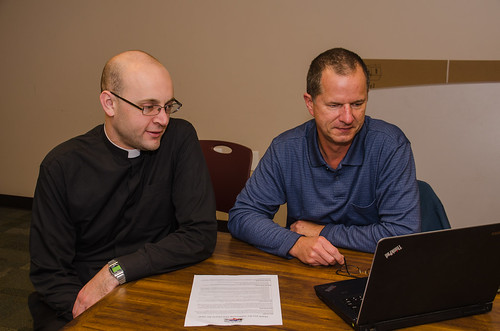 Hearts for Haiti
Hearts for Haiti is a ministry of the Our Lady of the Greenwood (OLG) Catholic Parish. Officially begun in 2009, the program creates a partnership relationship between the OLG Parish and the St. Georges Catholic Parish in Bassin-Bleu, located in northwest Haiti. This program not only provides physical and financial support for St. Georges Parish, but it also creates a more long-term relationship between the two parishes.

This speaks to the U.S. Catholic Bishops call to “serve the poor and vulnerable and to build bridges of solidarity among peoples of differing races, nations, language and ability, gender and culture” as well as giving the people of St. Georges Parish hope for the future. Chairperson Mike Martin says besides helping the Haitian people in the parish, the ministry is “a partnership in bringing the two parishes together in friendship and support.”

The Hearts for Haiti program currently provides only financial support and is focused on elevating education in this poor Caribbean country. The desire is for the funds to be used locally to not only improve education in the area but also generate jobs in the local economy. St. Georges Parish is home to St. Georges College (which is really what we would call middle school and high school – grades 7-12). Also there are four schools in small mountain villages that are part of the Parish and are included in the ministry of Hearts for Haiti.

While some of the aid to St. Georges Parish has been focused on “projects” over the years (such as improvements and additions to St. Georges College, one-time purchase of laptop computers, funding the expense of a water filtration system, etc.), they also support several ongoing needs. One of these needs is teacher salaries where adequate support allows teachers to stay in the job more permanently, keeping good teachers in their jobs and creating continuity in the education process. Teacher salary funding totals approximately $25,000 each year. 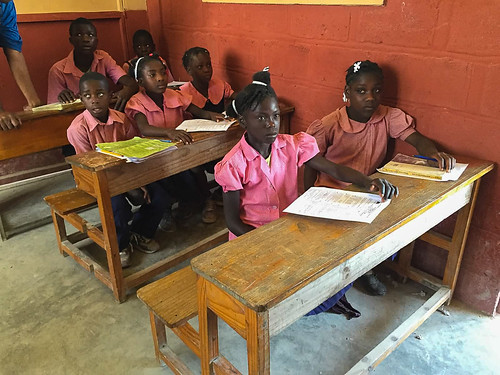 Another is funding a lunch program for both the pre-K and college students at a cost of $5,000 which recurs every year. Finally, Hearts for Haiti provides sponsorships for needy students in St. Georges Parish. These sponsorships, approximately $300 per year per student, cover tuition, books, materials, uniforms, etc., for those students who cannot afford it or families who have more than one student but cannot afford to send multiple children to the school. During the 2014-2015 school year, Hearts for Haiti sponsored 24 students.

Hearts for Haiti works to maintain and strengthen the human bond between the two parishes by sending a team of people to Bassin-Bleu each year. Along with meetings with the St. Georges Parish priest to align priorities and smooth out any issues that may arise, the team spends time in worship with the local congregation and visit students in the classroom, letting them know there is a community in the U.S. that cares about them and is actively helping them.

All funding for the Hearts for Haiti ministry is through donations, sponsorships and fundraisers. No funds from the parish budget are used to support this ministry.

The ministry tries to hold several fundraising events each year to attract members of the parish but also reaches out to the community to help support these good works.

S.H.E.E.P
Men for Missions, a ministry of One Mission Society (OMS), is a global group with headquarters in Johnson County that also is involved in Haitian relief. The ministry already has a presence in southern Haiti through Homes for Haiti which has been helping the rebuilding effort for some years. That effort was primarily partnering with Vengione Vital, pastor of an OMS-affiliated church in Port-au-Prince.

Now a new opportunity has presented itself to Men for Missions. According to Bill Evans, Director of Ministry Teams at Men for Missions, the Homes for Haiti ministry was working in the city of Gressier which is just a few miles from the 2010 earthquakes epicenter. The school in Gressier had been destroyed, and the OMS daughter church in Gressier, led by pastor Victor, was heavily damaged. During the work to restore Gressier, the Men for Missions team “fell in love with the children of the area,” described Bill. They felt a strong calling to help these children.

Evans feels “the kids are the hope of Haiti,” and OMS wants to invest in them and their education. Pastor Vital and Pastor Victor want families to do all they can to support their children’s education, but there are times when a family needs some assistance. Pastor Victor had worked with a group in Sabetha, Kansas, to start a sponsorship program which currently sponsors 32 students out of approximately 250 in the school. Around April 2015, the Sabetha group approached OMS, encouraging them to take over the sponsorship ministry. 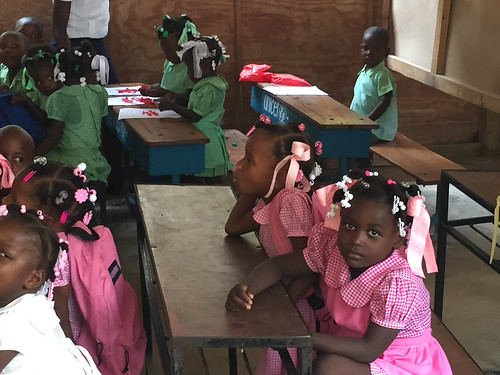 While OMS has a vehicle in northern Haiti for administering and overseeing student sponsorship programs, no such mechanism existed at that time in the south. After much thought, discussion and prayer, OMS decided to move forward with taking over this ministry, dovetailing with Men for Missions’ desire to help Haitian children. S.H.E.E.P. (Southern Haiti Evangelism and Education Program) was born.

To get the program off the ground, an administrator was needed at the Greenwood headquarters to champion the program, organize the effort and make periodic visits to Haiti to ensure the program was operating as intended. A financial administrator was also needed in Greenwood to track contributions, manage funds, arrange disbursements and provide fiscal oversight for the program. Evans’ wife Jackie was at a decision point in her career, and OMS management suggested she serve as the administrative head. She is targeted to begin January 2016. Longtime OMS volunteer Bob McCaslin was tapped to serve as the financial administrator and is currently in place.

The S.H.E.E.P. ministry is intended to be a financial ministry, supporting students with direct sponsorships. $30 per month will defray the cost of tuition, books, uniforms, lunch, etc., for one student. The sponsor will know which student they are sponsoring and vice versa. In addition to sponsorships, contributors can give to a general fund for the school to be used for special needs of the school. The ministries’ target is to sponsor no more than 20-25 percent of students at a school to avoid creating an environment of dependency. The ministry hopes to start the program supporting two schools and potentially add a third when the 2016-2017 school year begins.

The plight of the Haitian people is in the hearts of many. You can learn more about these ministries above.